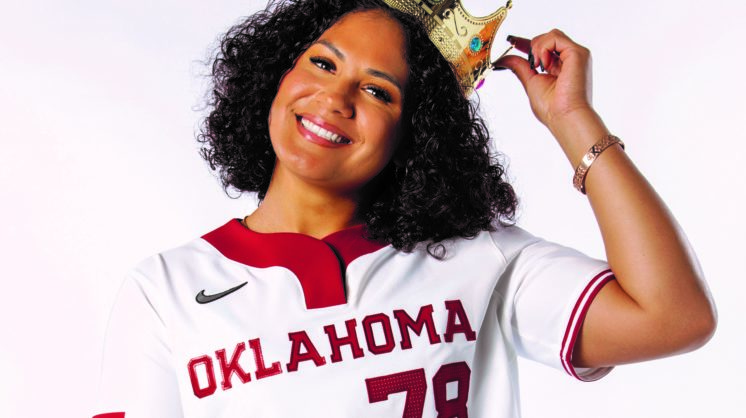 When people hear the word “crash” in relation to Hawaii, they might think of a wave that crashed upon the shore. It was one of Hawaii’s own, Jocelyn Aloha Pumehana Alo, who crashed the all-time collegiate home run record with her 96th career home run as her Sooners played at the University of Hawaii in the Rainbow Wahine Classic. You can almost hear Squints and Benny the Jet describing her to Smalls in The Sandlot. Alo is collegiate softball’s Babe Ruth, the Queen of Crash, the Colossus of Clout.

Whose record did she crash? Her predecessor at the University of Oklahoma, Lauren Chamberlain. Recently, Chamberlain posted a picture on Twitter placing a crown on Jocelyn Alo’s head. The tweet reads, “What’s understood doesn’t need to be explained… it’s your time now. Happy and proud. Love you and got you for life #96”

Alo’s record-breaking hit came against Hawaii’s Ashley Murphy, whose curveball hung out over the plate. When the Queen of Crash is at the plate, a pitcher can never let the ball do that. Moments later, the ball was exiting the park over the right-center field fence. Soon after, Alo’s father Levi set a lei around her neck, and crowned her with flowers.

Alo described the moment by calling it a “Huge relief. Now I feel everyone can relax and we can elevate our game even more.”

Reflecting on the moment when Alo broke her own record, Chamberlain said, “Records are made to be broken. I’ve enjoyed the past 7 years. It’s Jocelyn’s time now. It definitely helps that she’s the one. She’s like a sister to me, and we genuinely root for each other. It’s a win all around.”

All the years in the batting cages, traveling from one ballpark to another, lacing her cleats and swinging a bat had culminated in this moment. The day she crossed home plate as she became the greatest home run hitter in NCAA history wasn’t like every other home run she had hit. This time, Jocelyn Alo’s family cheered as she crossed home plate — only 100 yards from the house she grew up in. The new Queen of Crash had come home to claim her crown.