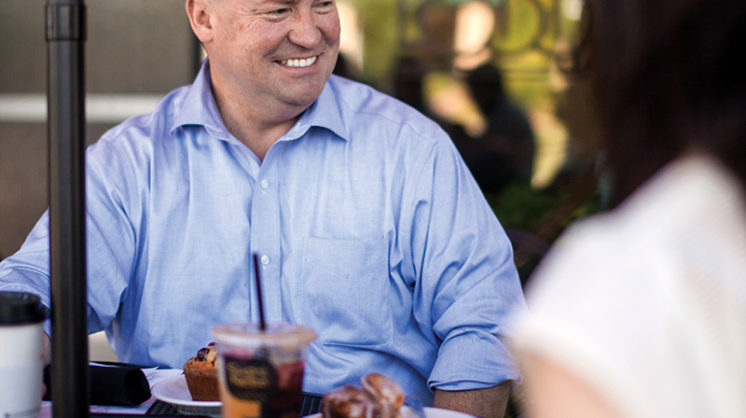 When it comes to health care, who knows best how to treat an individual – a doctor or a politician? That’s the question Oklahomans for Health is asking as they attempt to make Oklahoma the next state where medical marijuana is legal.

A petition began last May and concludes in August. If enough signatures are gathered, the initiative will go before a vote of the people in November.

So far, 26 states have approved the use of cannabis for medicinal purposes. Now, former gubernatorial candidate Joe Dorman is lending his name to the initiative, serving as a board member and helping to collect the needed signatures. We sat down with the Rush Springs Democrat for his views on pot, politics and the state of Oklahoma’s health.

If voters approve this initiative, how will it affect the citizens of Oklahoma? “This treatment plan could help seniors with issues of acute arthritis, cancer patients with ease of pain and suffering, kids with debilitating seizure issues not helped by Cannabidiol Oil (CBD) and veterans who face issues with Post Traumatic Stress Disorder. It does not make sense to me to turn away from something that medical studies have shown can help people have a better quality of life.

“I became involved with the issue due to a conversation with Brittany Hardy, and the effects of CBD oil on treating her child’s seizures. CBD oil is a derivative of cannabis and is often used to treat seizures and schizophrenia. Ms. Hardy approached each of the candidates in the race for governor, and I am thankful I sat down with her to discuss the problems she faced with her inability to get her child the necessary treatment in Oklahoma to help her. I found it appalling that someone from Oklahoma would either have to break the law or leave the state to get the help they needed for their child. This led to two recent laws, which legalized this form of treatment using marijuana, passed by our Legislature and signed by our governor.

“I have also seen many friends die painfully from cancer or a condition which could see an improvement regarding their quality of life through the proper use of marijuana and its derivatives as a medicine. I do not believe Oklahomans should suffer when there is something available through the supervision of a doctor that can improve their lives.”

So according to the petition, Oklahoma farmers would be allowed to grow marijuana, and then a tax of 7 percent would be applied to retail sales? “Yes, the language presented to the people would allow farmers to have the ability to legally grow medical-quality marijuana and sell it to a manufacturing facility to process the plant into a medical product. The manufacturer will then distribute to a dispensary or pharmacy to allow the patient the ability to purchase the product under the license of a doctor, which is essentially the same as a prescription. Only a doctor with a medical license can issue the authority to use marijuana as a treatment.

“If the patient is under 18, two doctors must sign off on the treatment plan. The sale will have a 7 percent tax collected by the state, with an additional amount allowed to be charged by the city, should the municipality want to charge more. The funding collected through the tax and the licensing would go to cover the cost of the program, and any additional funding is distributed to education programs (75 percent) and drug treatment programs under the Department of Mental Health and Substance Abuse (25 percent). All parts of the process will be regulated by the Oklahoma Department of Health and other agencies.”

One of the big questions on this initiative is who knows best how to treat a patient – a politician or a doctor? “Doctors are health care professionals, politicians are not. Two Surgeons General for the United States, as well as CNN’s Dr. Sanjay Gupta, are just some of the doctors who support medical marijuana. The people being helped here are those who are in excruciating pain or anguish for some condition which other medicines have not been as successful in treating. In addition, we also need to allow programs such as the Oklahoma Medical Research Foundation the legal ability to do additional research to see what other conditions might find relief from this type of medical treatment.”

What hurdles are you facing in getting this on the November ballot? “Overcoming the stigma with which we were raised as Oklahomans is the toughest part. The testimonials from friends and family who have used marijuana as a medicine have been the best points for many who have changed their minds over the years, including myself.

“Another hurdle is obviously the limited time to collect the necessary signatures. We need Oklahomans who are willing to volunteer to even collect a sheet of 20 signatures to sign up at oklahomansforhealth.com and help us get to the necessary amount in the shortest amount of time.”

How many other states have already approved medicinal marijuana? “Ohio became the 26th state to legalize medical marijuana. Louisiana became number 25 a few weeks ago with Gov. John Bel Edwards, a Democrat, signing the bill passed by a Republican Legislature. Gov. John Kasich of Ohio, a Republican and former candidate for President of the United States, signed their law into effect in June. I am confident Oklahomans will look at the facts presented on how this helps people with medical conditions and give this a serious consideration when it comes to deciding this issue on the ballot in November.”

[Editor’s Note: The Louisiana statutes currently allow a physician to prescribe marijuana for specific therapeutic uses, but does not list protection from prosecution for those involved in the process, so there are still some legal hurdles to be overcome.]

What are your thoughts on Oklahoma’s budget crisis? “It is a travesty with what we see as the financial operation of our state and the current $1.3 billion shortfall from the previous session. We need leaders who are willing to balance the budget and not do it on the backs of the working class. Tax cuts for the wealthy and large corporations haven’t helped our economy grow. They have instead diminished the resources to run critical functions, such as schools, road repairs, child protection services and public safety and corrections.

“We also need leaders who will have the courage to go to the people and justify tax equity so that everyone pays their fair share to fund specific functions of our government, not shirk their responsibility. Legislators continue to raise fees in a disguised effort to fund the state. That practice needs to be reined in with more budget transparency.”

Oklahoma has become a notoriously red state in recent years, but a pendulum can only swing so far in one direction before it has to move back to center. Do you see a shift coming in Oklahoma? “Oklahomans are good people. We aren’t bitterly partisan. We’re not extremist. And yet, our politics have swung too far to one extreme due to low voter turnout. I expect the good people of Oklahoma will help move our politics and policies back to representing what we truly are – practical people who want to get things done for all Oklahomans.”