Julie Richardson: At Home in the Heights - 405 Magazine 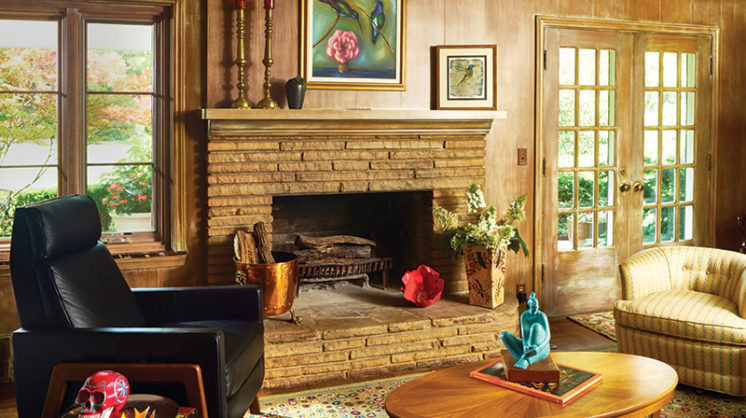 A longtime resident of Crown and Edgemere Heights, Julie Richardson isn’t the only family member who loves her neighborhood: Regal terrier mix Edith commands all that she sees from her perch on the hearth of the outdoor fireplace in Richardson’s gorgeous back yard, while a statue of Saint Francis keeps a watchful eye.

Three things are immediately clear about Crown Heights-Edgemere Heights resident Julie Richardson: She’s gregarious, hilarious and unimpeachably dedicated to her family and neighborhood. Her three sons – Greg, 40, Russ, 36, and Will, 27 – all grew up in Richardson’s beloved neighborhood, and Greg’s children are the third generation to have called its idyllic surroundings home.

“My story, if I have a story, is such a Crown Heights story,” Richardson says. “I can’t think of a better place. The kids went to local schools, Westminster and Bishop McGuinness, and grew up playing in the park and roaming the neighborhood with their friends.”

• Richardson’s den is filled with beautiful objects and classic, comfortable furnishings. An irreverent dotted rug winks from below, encouraging guests to sink down into the plush sofa cushions and take a good look around. Her home is a Who’s Who of local artists, and includes works by ceramicist Suzi Swinford, Harold Holden, Ellen Dow, Rebecca Friedman Wheeler, Ernesto Sanchez, Shirley Thompson-Smith, Bert Seabourn and Linda Warren – whose painting of hummingbirds, which Richardson loves, hangs above the fireplace.

Her youngest, Will, stops in to hang out and have lunch as she tells her story, and interjects stories – some printable, some not. “The first word I think of when I think about my mother is loyal,” he says. “And she’s one of the funniest people I know.”

Her home, which she shares with Benny the Labradoodle and Edith the terrier, both rescues, is gracious and elegant, with pops of whimsy and lots of great art. “My love of art comes from my parents. They spent time at their home in Santa Fe, and I suppose I inherited my interest in Southwestern art from them.” 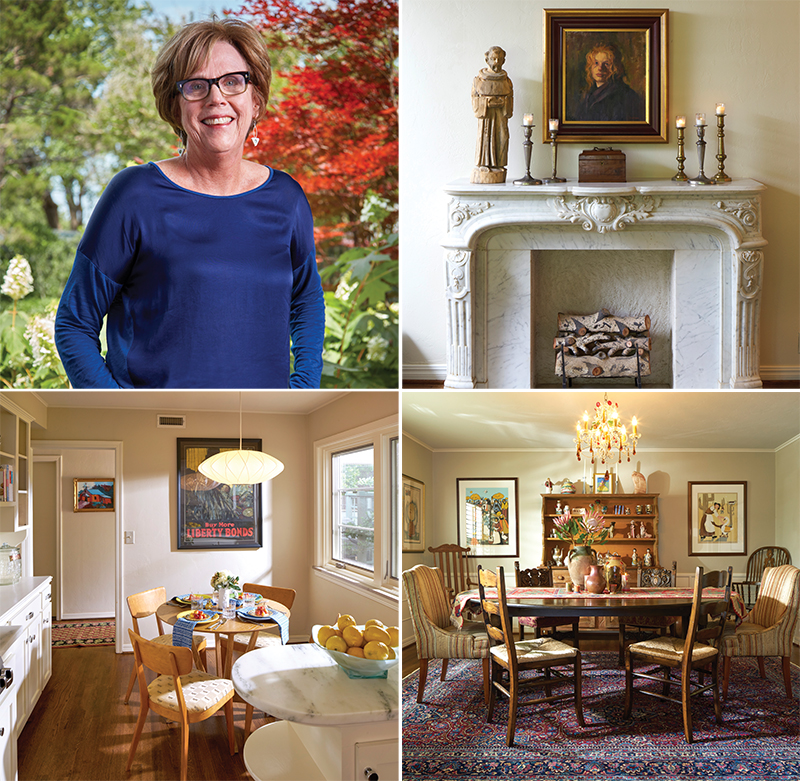 • Julie Richardson enjoys a moment in her beautifully manicured back yard.

• In the living room, an intricately carved marble mantel, adorned with candlesticks and a statue of Saint Francis, is perhaps the most formally composed area of the home. The portrait feels somber, almost mournful.

• In the living room, an intricately carved marble mantel, adorned with candlesticks and a statue of Saint Francis, is perhaps the most formally composed area of the home. The portrait feels somber, almost mournful.

Her most treasured piece, by acclaimed Western artist John Moyers, hangs in her den. “I love the night sky in this piece, and the horses. It was such a big deal to me to buy this painting. It was my most serious art purchase and it was a stretch for me to afford it, but I bought it anyway and it was totally worth it,” Richardson says.

Her neighborhood has been a constant in her life since she came here in 1979. Through thick and thin, through tragedy and triumph, it’s always remained true with its bucolic parks and immaculately tended medians, friendly neighbors who’ve become lifelong friends and beautiful variety of architectural styles. 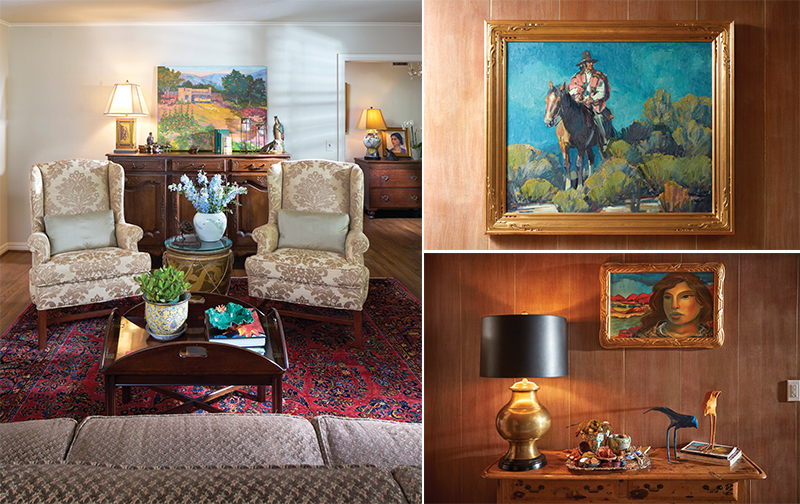 • A pair of wing chairs covered in neutral damask anchors one side of Richardson’s living room. On the living room tables, frozen as if they were about to scamper, live a variety of little bronzes of small creatures. Little horned toads, lizards and the like add whimsy, but you’ve got to look for them.

• Richardson’s treasured Moyers painting anchors one wall. Nearby is another extraordinary piece, this one by Southwestern art luminary Miguel Martinez.

• Martinez’s piece is a tray filled with art made by Richardson’s favorite artists: her children.

And in return, she’s remained true to it, serving on the neighborhood association’s board of directors and coordinating the annual tree lighting and sleigh ride in December. She is also a longstanding member of her book club, many of whose members are fellow neighborhooders.

“I’ve lived in several homes in the neighborhood. My house now is in Edgemere Heights, which means it was built in the 1950s. To me, after living on the Crown Heights side, where the homes were built in the 1930s, it seems like a brand-new house.”