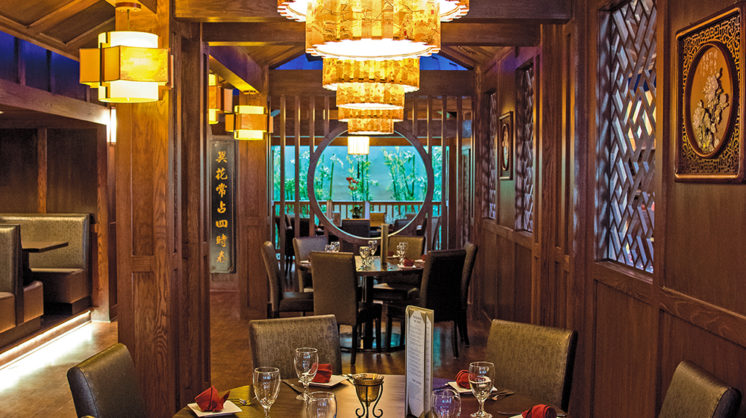 Once upon a time, a Chinese man went on a journey, and wound up in an idyllic, peaceful hideaway, removed from the worries of the outside lands and feeling like its own little world. That’s the legend of “The Peach Blossom Spring,” a famous Chinese story (written versions date back nearly 1,600 years), which serves as inspiration for the construction of new OKC restaurant Kwan’s Kitchen. There’s also a degree to which it describes chef Pak Kwan himself and the space he’s created – though in the original tale, the fabulous land is a secret and unable to be found again, while visiting Kwan’s is as easy as heading to Memorial and May. Also, the food is better in this story.

The impact of the space is undeniable, though: Architect Wister Wu has helped to create an environment like no other. He told us the story of Peach Blossom Spring – a version of which is depicted on the light shades – and said his intention throughout was to channel that feeling inside this space. The result is its own little world, complete with heavens above (constellations of small blue lights glittering against a black “sky”) and the rich earth tones and texture of wood below. The restaurant’s entrance represents a village square in miniature, complete with lucite-covered koi pond, moon gate, flowering trees and glowing paper lanterns. No element is added randomly or haphazardly, either – the waterfall symbolizing refreshment and abundance is placed against the east wall, in accordance with proper feng shui.

The degree of detail at every level is genuinely impressive; on a large scale, individual sections of seating have different vibes, such as the northern room whose bamboo shadowbox gives it an outdoor feel; and closer looks reveal an intricate, slightly raised pattern on the upholstery, iconic blue-and-white willow pattern dishes used as wall hangings and napkins folded into lotuses atop each minimalist, square white plate.

Great attention to details blended into harmonious wholes is an apt description of much of the menu, as well. Chef Kwan learned his trade in the massive city of Guangzhou and spent a decade in Belgium perfecting his art – you might have had his food at Fung’s Kitchen here in OKC, but this is the culmination of his personal lifelong dream, and a chance to really stretch himself and show off what he can do in his own kitchen. 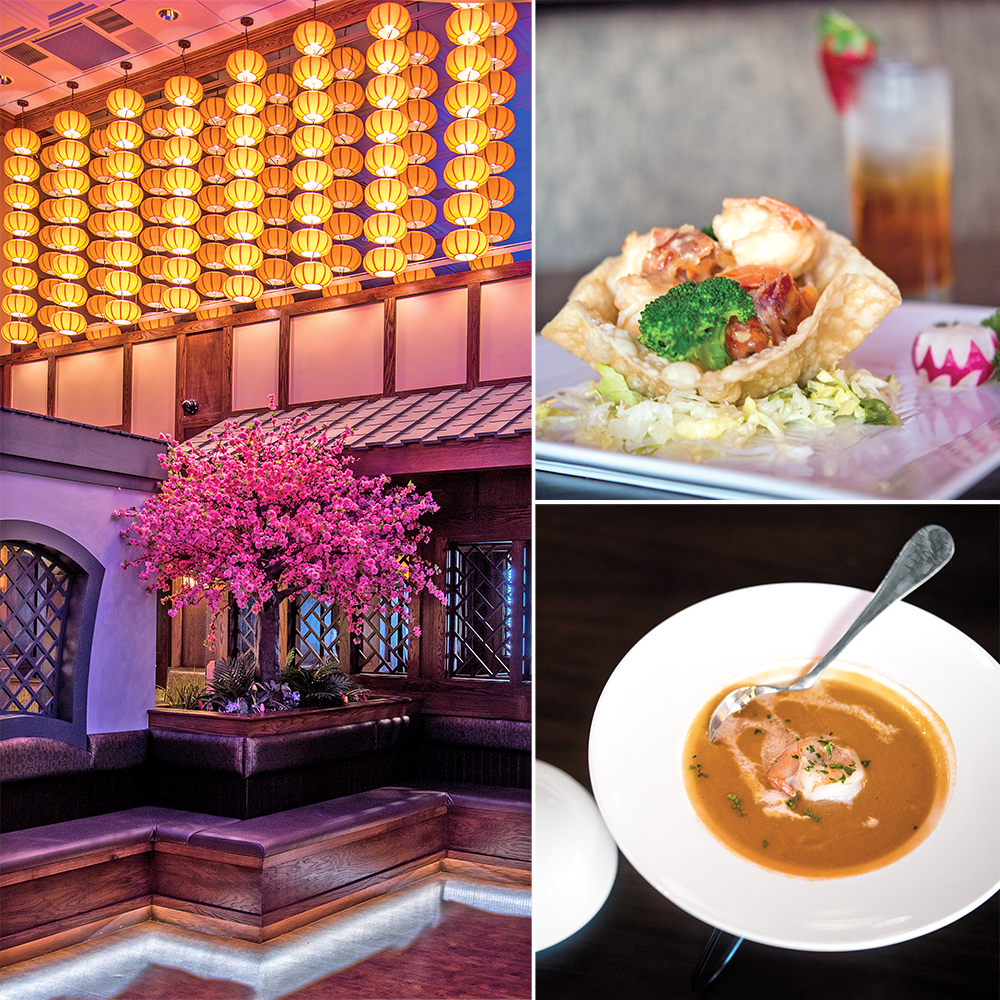 Putting your own personal stamp on a cuisine that’s been around for thousands of years might seem intimidating, but Kwan pointed out that Guangzhou is a port, and not very far from Hong Kong. Flavors from around the world have been blending there for centuries as sailors, merchants and other travelers come and go, so it has no single unchanging tradition for him to uphold. In working to maintain authentic influences while innovating, his goal is to get people to try something new and slightly unfamiliar, and to find a flavor combination they might not have chosen for themselves. So while the menu does include familiar-sounding dishes along the lines of Kung Pao Chicken and Mongolian Beef, you shouldn’t hesitate to experiment with something a little further afield; specialties such as the Champagne Sweet and Sour Chicken, Peking Shrimp and Abalone Fried Rice served in a lotus leaf are delicately flavored and beautifully balanced. And you can’t go wrong by starting with a cup of savory bisque – the duck version might be even better than the shrimp.

I would recommend one particular entree, though: Kwan described the Sea Bass as iconic, the sort of dish high-ranking diplomats would be served at an official state dinner. The fish is immersed in oil for several days before cooking, resulting in a crispy-outside-tender-within texture I’ve never encountered before. It’s a marvel.

Whatever you select will have exceptional presentation, too. Chef Kwan regularly uses his impressive knife skills to carve vegetable garnish into surprisingly intricate lilies, rabbits or other shapes, purely for the sake of adding an aesthetic grace note to the dish. 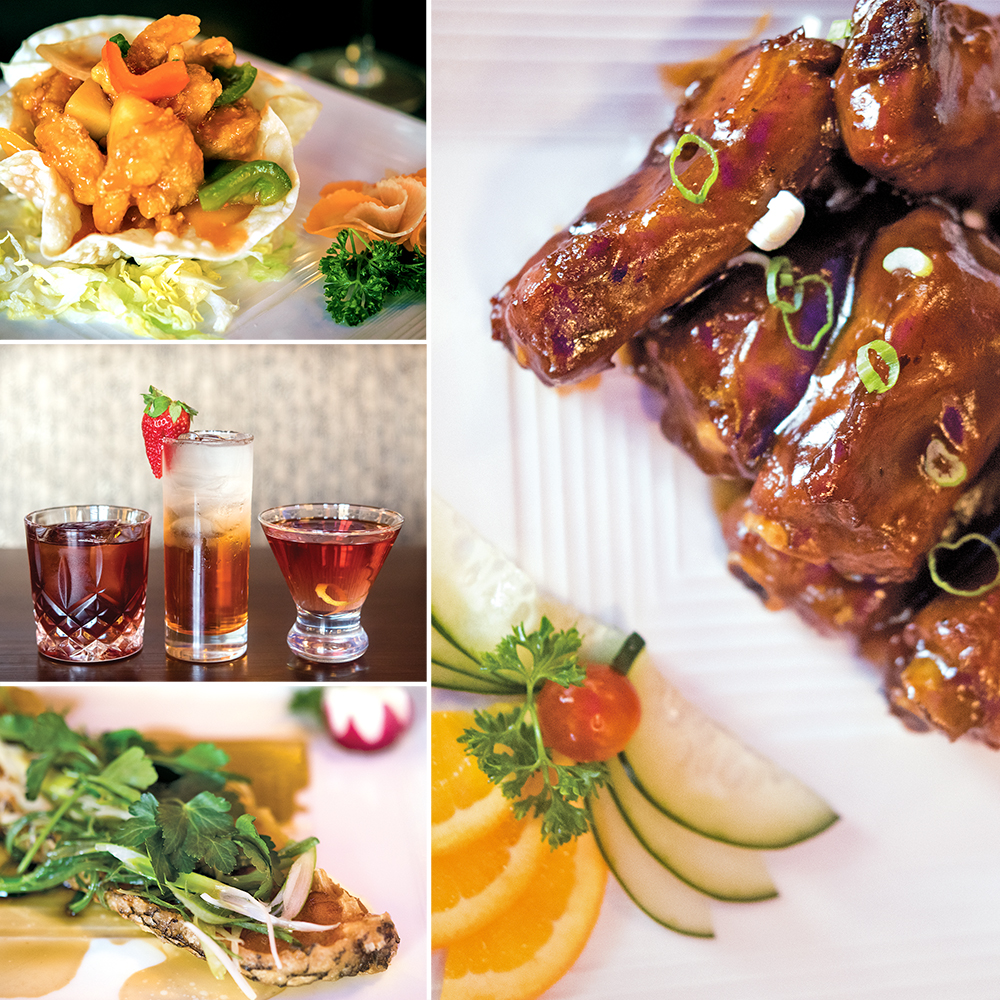 It’s clear, I hope, that this is not a hole-in-the-wall Chinese restaurant specializing in rice, meat and sticky sauces for takeout. Yet the price point is not prohibitive, and lunch entrees are $8 apiece. “We’re trying to bring fine dining on a casual level,” says general manager Don Kerr. “Not skimp on the ‘fine,’ but give the experience to everyone.”

As far as I’m concerned, it’s an experience worth having – and in the future I’ll be glad this is an enchanting world I can visit again and again.

The restaurant’s sigil is the Flying Horse of Gansu, a bronze sculpture created around 1,800 years ago that is now a treasured cultural relic. The steed, pictured in mid-gallop and treading on a flying bird, carries the imagery of outrunning gravity – Kwan chose it as a symbol both of Chinese identity and a more universal expression of enthusiasm and joy.

One other sign that this is no ordinary Americanized takeout spot is Kwan’s focus on the bar. They offer a suite of signature cocktails – the Fox Spirit is particularly lovely – and local brewer Vanessa House is even working on a special ginger-lemongrass lager to serve as a house beer for this establishment. It will be available in local stores, but the only place to find it on tap is right here in Kwan’s Kitchen.