Land and Sea Showcases the Beasts of Both Worlds - 405 Magazine 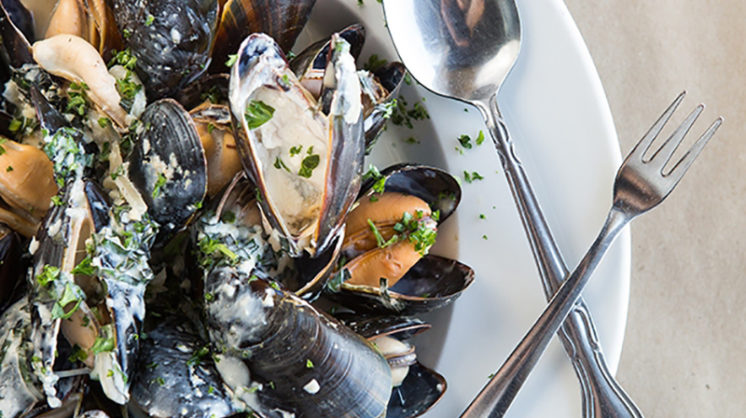 Picture a restaurant that boasts a large, elegant dining room and also has a small space in the back for friends of the owners: a cozy little less-formal area that’s more comfortable than glamorous, with flickering candles and strings of black-and-white-photos and the occasional punctuation of laughter from the chef as he cooks.

Now lose the big dining room. You should have a pretty good mental approximation of the size and atmosphere of Land and Sea, a tiny OKC restaurant with a vast command of the delicious creatures of both its namesake biomes.

The menu makes it easy to hop back and forth between ocean and earth; you can even do both at once via appetizers, say for example the mussels (served in a fragrant coconut sauce) and beef empanadas (the flaky crust is especially nice). The drinks menu probably technically counts as “land,” but a Bold Fashioned (made with Bulleit rye and brown sugar) is a fine accompaniment to anything.

Hard as it is to pass up a good rack of lamb – and this one is; it’s overlaid by a rich, redolent tomato chutney – trust the server when he or she mentions the specialty of the house: the potato-crusted sea bass.

It’s an extremely thick cut, perfectly done all the way through with a rich, slightly buttery flavor and firm texture that flakes easily under a fork and is tender on the teeth. The potato crust is slightly herbed, but most of the added flavor comes from the light citrus cream underneath, which is delicious enough to make me scrape the plate clean and then continue scraping in hopes of somehow finding more.

I’m more likely to order a seafood entrée than a steak anyway (despite having lived in Oklahoma my whole life; go figure), and dishes like this make that unconventional predilection seem like a stroke of genius. Seriously, even if you’re the sort of person who wishes more menus had a “turf and turf” option, you should try this fish – it’s wonderful.

Both entrees, by the way, were accompanied by some roasted vegetables and a side of whipped potatoes given a mildly piquant pop from guajillo peppers, which I quite liked.

One of the hallmarks of a good restaurant is how reluctant you are to get up and leave after the meal, so that even though you’re no longer hungry you’re strongly tempted to stay for dessert and coffee anyway. We chose the flourless chocolate torte, so dense and rich it’s more like a pudding than a cake; I have no regrets. And we did eventually depart, but not eagerly. It’s a good atmosphere for lingering.

This restaurant isn’t chef Sean Cummings’ first culinary rodeo by a long shot, but it’s the first time I’ve encountered his fare – Boca Boca was before my time, and his eponymous Irish pub is one of those missed opportunities I plan to rectify once I lay hands on a time machine. I kept hearing it was great, and I kept thinking I should go, and then one day the chance had disappeared. I don’t imagine Land and Sea will sink beneath the waves of history anytime in the immediate future, but still – I hope you can learn a lesson from my example. Land and Sea is pretty great; you should go. And try the house special.