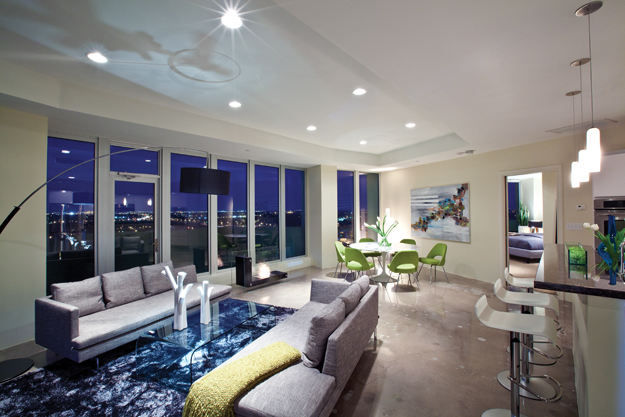 It could be the first glimpse of the morning sun piercing the night’s blackness, or the twinkling lights of the city slowly coming to life. Maybe it’s the impending thunderstorm, with lightning dancing on the horizon. Or it could be something as simple as standing on the balcony on a crisp autumn day, gazing at Oklahoma City life 19 stories below.

Bob and Anabel Thompson admit that they just adore a penthouse view. Their home is on one of the top floors in Founder’s Tower, the elegant landmark on Oklahoma City’s northwest side.

It takes mere seconds for an elevator to whisk you to the Thompsons’ floor. As the door opens, the setting could easily be New York City, or Milan, or Paris – or any number of cities where “chic” is the word. But it just so happens this is Oklahoma City.

“Living here, I feel like it could be anywhere in the world,” says Anabel. “I’m originally from Panama, and as I look around our house, with these views, it is magnificent.”

On a clear day you can see forever…

Their neighbors are like a roster of Oklahoma City’s “Who’s Who.” A couple of OKC Thunder players live in the building, and just below them is Oklahoma City Councilman Dr. Ed Shadid.

“We really enjoy our neighbors,” said Bob. “It’s a real eclectic bunch, a fun group to live with. And also the lifestyle in general; it’s carefree and simple with no responsibility. It is such a luxury in the fall to be able to see all the trees changing color without raking leaves, or in the summer to see the grass below without having to mow. So those are all special aspects we enjoy every day.”

Bob and Anabel have been married for 17 years. Bob has a law degree from the University of Oklahoma, and does oil and gas title work. Together, the couple recently entered into a partnership in BD Home, the tony furniture store in Classen Curve. These days they find themselves shuttling between their stores in Oklahoma City and Houston, and a new location in Panama City that is currently under construction.

But spending time at home is what they enjoy most.

“I love every moment of every day at home. The sunrises, the sunsets – it’s just amazing. I couldn’t imagine having to live on the ground again,” Anabel laughs.

“We are literally living in the clouds,” Bob chimes in. “We are treated to a Technicolor sunrise every morning; and the sunsets, and all the Oklahoma weather from the electrical storms, hail storms, snow storms – we see it all. From one of our balconies we can see the downtown cityscape and from another balcony we can see the sailboats on Lake Hefner. Anabel and I are very fortunate to be able to experience this every single day.”

The Thompsons say the view from the penthouse is what it’s really all about. “The sunrises here are almost indescribable,” says Anabel. “The sky in the morning has layers of different colors. As you awaken, it begins with a brilliant red; then it goes into orange and fades to a lighter yellow. It is simply breathtaking. At night, we can see the lights begin to glow and the city come alive, and the downtown skyline. Everything is beautiful; it is so difficult to grasp it all.

“Even the Home Depot below us that has the lights in the roof, even that looks pretty,” she laughs. “You can walk from room to room and the landscape is different from every angle.”

The original concrete floors have been buffed and polished, adding a sophisticated urban flair. Modern furniture, but with a retro design, pays homage to the 1960s-era architecture.

The clean lines of a freestanding see-through glass fireplace add coziness to the main living area, while beautiful white orchids bloom in an east-facing window.

Down the hall, modern meets traditional as Anabel proudly displays a case of pre-Columbian pottery – some dating 600 to 1,000 years old. And in Bob’s office, a framed black-and-white photo shows his mother and his grandparents dressed elegantly, seated amongst a throng of well-groomed individuals. The caption reads: “Inaugural Dinner of Franklin Delano Roosevelt, January 19, 1945.”

History and tradition are very important to Bob and Anabel. Having previously lived in the Edgemere and Crown Heights neighborhoods, they find Founder’s Tower unique in its style.

“I grew up in Oklahoma City and remember Founder’s Tower from when I was a child,” Bob said. “The art-deco style was so different from anything else we had at that time. It has always had iconic architecture, and really had a prominent place on Northwest Highway.

“Of course, there was the old ‘Founders Fair’ department store where Home Depot and Best Buy are now. There was the Continental Theater and the Northwest Hi-Way Drive in. Down the street was Wedgewood Amusement Park. And Founder’s Tower sat right in the middle,” he reminisced.

One of the most iconic remnants of the original Founder’s Tower is about to make a return, according to Bob. The revolving restaurant, originally known as the “Chandelle Club,” and later, “Nikz,” may be reopening as early as next year.

“There are so many memories of the Chandelle Club. I think it’s a perfect location,” he says. “I remember going up to the restaurant for lunch as a kid with the rest of my family, so it will be nice to have that landmark return.

“The restaurant is directly above us. Just recently they tested the revolving mechanism to make sure it is still operational. Later I saw one of the owners, and he asked if I had been disturbed by the circulating ceiling. I hadn’t even realized it was running. I just think it’s very important to have some of the things that were originally here in this building, and I can’t wait to take Anabel there for dinner,” Bob said.

As autumn kicks into high gear, the shorter days and cooler weather turns Bob and Anabel’s thoughts toward the holidays. They say family and friends alike are thrilled by the “wow factor,” and the panoramic view of Oklahoma City all dressed up for Christmas.

“Decorating for the holidays is a new style for us, because in our old homes we had very traditional furnishings. Now we have a black-and-white-and-silver Christmas tree. It is so beautiful and seems to fit in with the whole scheme of the building. We redesigned all of our holiday decorating to coordinate with the architecture,” Anabel says.

“When we have holiday gatherings it is so much fun to watch the expressions on people’s faces,” Bob adds. “We can see the roofs of the houses outlined for Christmas, and the twinkling lights all over the city. Unfortunately we can’t see the Chesapeake lights from here,” he laughs, “but the scene at Christmas is amazing.”

It’s easy to see Bob and Anabel are perfectly content with their penthouse-in-the-clouds. They are equally content living in the heart of the heartland, and are just as proud of their city.

“We have progressed so much in recent years, and we have grown by leaps and bounds,” Bob says. This isn’t the city I grew up in; this is a new Oklahoma City. We have Bricktown; we watched the Devon building rise in the sky. In the summer we can sit on the balcony and watch the activity at Lake Hefner. And here at Founder’s we have a multi-family architectural building where we can observe it all. So it makes us feel really proud to call Oklahoma City our home.”

Living in the Present

Founder’s Tower, one of the most iconic buildings on Oklahoma City’s northwest side, has been a landmark since 1963. A few years ago, the 20-story art deco building underwent a major renovation, changing from an office complex to Oklahoma City’s “most exclusive address,” according to their website. Leading the redesign was Rick Brown with RBA Architects.

But bringing Founder’s Tower into the 21st century was no easy task.

“Founder’s was an early 1960s office building, which had not been renovated since it was built,” Brown said. “The lobby had been remodeled in the early 1980s, and an entry was added that was inconsistent with the original architecture. Other than that, the tower suffered from lack of maintenance and outdated systems. In fact, it was only about 30 percent occupied. The mechanical systems were failing, and there was not a full sprinkler or code-compliant exiting system.”

Converting the structure to a residential complex presented some unique challenges, Brown says. Overall, each floor is relatively small, with less than 7,000 square feet. It was well suited to residential design, however.

“Each unit has floor-to-ceiling glass and virtually all rooms have exterior views. The shape gave us an opportunity to design floor plans with a less-rigid geometry. The floor plans are very open, with living and kitchen/dining areas combined that give it a real sense of living in an urban high-rise loft building. While the exterior geometry was challenging, it is also what creates its unique appeal. It is a one-of-a-kind, iconic statement, a kind of ’60s George Jetson-esque architectural statement.”

Very few alterations were made to the tower’s exterior, preserving the original 1960s design.

“We made a conscious decision to maintain the exterior elevations, keeping the façade intact. However, the exterior curtain wall was leaking and very energy inefficient, with non-insulated glass. We replaced it with green-tinted, insulated windows, which softens the rigid geometry of the building and is more appropriate for solar control in a residential building,” Brown said.

The developers demolished a two-story windowless concrete “bunker” that was not part of the original tower, making room for a swimming pool and a parking structure. They also took down the 1980s-era entry, and replaced it with a new, modern covered entrance more in line with the building’s original design.

Each unit has a balcony, and is equipped with top-of-the-line appointments: hardwood floors, granite countertops and a stainless steel appliance package. The cabinetry is made with Eucalyptus wood, and different color schemes are available to suit each homeowner’s tastes.

Some discussion has been made about bringing back the legendary revolving “Chandelle Club” on the 20th floor, but Brown says some snags may be likely.

“The restaurant still rotates, but the mechanics are a bit bumpy,” he says. “Service is also an issue, as the elevators are quite small and there is no freight elevator to the space. Nevertheless, I feel it could still work.”

Considering the “personality” of the building is what Brown says he tried to do when bringing it back to life.

“It takes a certain sense of commitment to maintain what is important in the original building and retain the ‘iconic’ look and feel,” Brown said. “It is not about reproducing history, but more about ‘reimaging’ a structure with a new function and a new constituency; preserving that diversity in the urban environment and bridging the gap between the 20th and 21st centuries.”