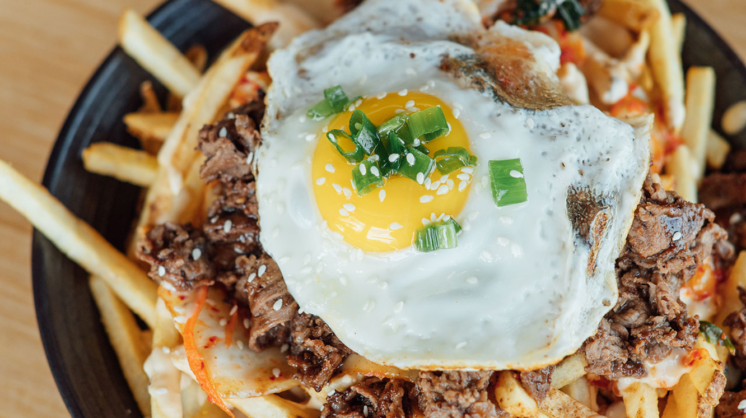 Where foundations of fries are only the beginning.

Loaded fries are a frequent menu listing, but how often do you pause to ask “What constitutes a loaded fry?” We’ll start with one common denominator, and it’s cheese: cheddar, cheese sauce, something vaguely French, American “cheese,” Velveeta … absolutely does not matter. Of course, if you stop with cheese, you just have cheese fries — and that’s not much of a load, really, so let’s just say it’s cheese plus something else, with the most common additions being bacon, chives and sour cream.

There are as many origin stories for loaded fries as there are places that serve them. Texas claims the creation of chili-cheese fries, but we’re used to Texas taking the credit for things of dubious provenance (chicken-fried steak and breakfast tacos, for example).

The broader truth is, though, that no one really cares who did it first as long as it’s delicious, and we fully support experimenting with different combinations. Some restaurants are more imaginative than others — or simply have more product on hand — so around the 405 you can find toppings ranging from crab to kimchi, and bulgogi to jalapeños.

Birdie’s Fried Chicken (2201 NW 150th St., Edmond) adds chopped Korean-fried tenders to its remarkably delicious fries, so delicious they really don’t need help. Chef
Kevin Lee also adds avocados, so these are definitely the healthiest in the list. The rest of the toppings are traditional: bacon, chives and sour cream.

Guyutes (730 NW 23rd St., OKC) opts for waffle fries for its Tequila Sunfryz, and if there is a dish on this menu more people should know about, this is the one. Tequila queso, pulled pork, sunny-side egg, veggies and cilantro crema round out an intensely flavorful and hearty dish.

The Mont (1300 Classen Blvd., Norman) is two things: a popular Norman restaurant and the near-mythical version of this close-to-campus eatery that lives on in the memory of OU alums. No matter which version lives in your head, both have excellent traditional loaded fries (bacon, two kinds of cheese, chives), and you might as well have them with a Swirl.

Riviere Modern Banh Mi (905 N. Hudson Ave., OKC) uses bulgogi to add punch to its loaded fries. (The addition of bulgogi to various dishes is a trend that should continue and grow.) Kimchi is optional, and the cheese sauce would be the star but for the bulgogi. You can also add a fried egg, and why not?

Sushi Neko’s (4318 N. Western Ave., OKC) eponymous loaded fries — Neko Fries — have long been a local favorite. The key ingredient is likely the super savory and spicy togarashi, but the caramelized soy sauce doesn’t hurt, nor does the wasabi aioli.

Tasty Burger (15924 SE 29th St., Choctaw) is one of those joints where all locals ate when they were in high school, because the menu is built around burgers, fries, steak fingers and, of course, coneys. It also makes an excellent plate of chili cheese fries, and because they contain cheese plus at least one other thing, they qualify as loaded fries.