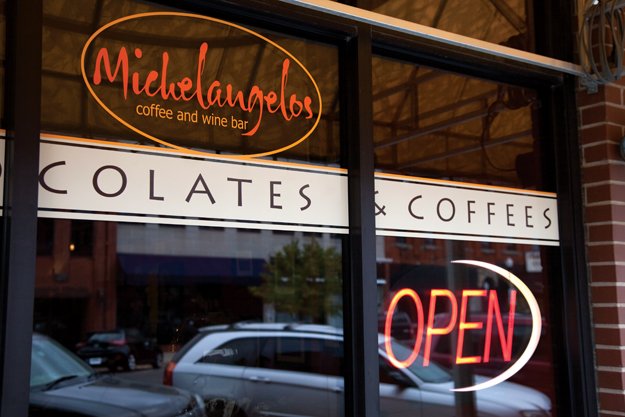 Coffee is one of the country’s most ubiquitous beverages, but not all mugs are brewed equal. If you want a pick-me-up with personality, someplace with genuine taste and local flavor rather than a mere dispenser of hot brown liquid, you’re in luck – the metro has a strong set of heavily caffeinated gems.

While boasting elements of a bistro (they make pizzas and have a solid wine list) and a club (live weekend performances and a monthly open mic night), Michelangelo’s still has the soul of a coffee bar: tables for working, couches for lounging, outdoor seats for basking and excellent espresso for fueling all of the above. Also try: Gray Owl Coffee, Syrup, Hastings (Don’t scoff; the Hardback Café has a killer Mayan Mocha.)

The interior is a crisp, classy blend of sun-dappled bustle and mood-lit calm, and the menu is out of this continent. While the “stylish coffee and tea” emporium does the classics very well, Americanos aren’t hard to find… but how many other places in the metro can make you chrysanthemum tea or a sweet potato latté? (Which is, by the way, sensational.) Also try: Cowgirl Coffee, Café Evoke

The drinks are good – the cayenne-spiked Sexi Mexi almost painfully so – and the breakfast and lunch menus make it a heavenly haven for vegetarians. But the Red Cup’s evangelists always emphasize its vibe: mismatched furniture, creaky wooden floors, local art, unfeigned sense of casual community. Like the best coffeehouses, it leaves customers in no hurry to depart. Also try: The Paramount, Beatnix Café

It’s not really close to anything except Westmoore High School, but if you make time to stop by, the detour may quickly become a habit. Friendly service (the owner greets regulars by name) and cheerful atmosphere define the smallish space, and it manages the admirable feat of making flavored beverages whose flavors actually blend and don’t overwhelm the coffee. Try the namesake blueberry-and-white-chocolate-laced latté.

D-I-Y (Because you can’t always abandon the office and spend the afternoon hanging around a coffeehouse, more’s the pity)
Top pick: PrimaCafé – 44 N.E. 51st in OKC, 525.0006, primacafe.com

The Slice House runs on this stuff. Besides intangibles like their commitment to sustainability or Chip always being glad to see us, the coffee is consistently excellent – they use a traditional drum roaster to produce small batches in a process they call more art than science – at a price point that’s lower than many inferior alternatives. Also try: Elemental Coffee Roasters, Coffee Slingers