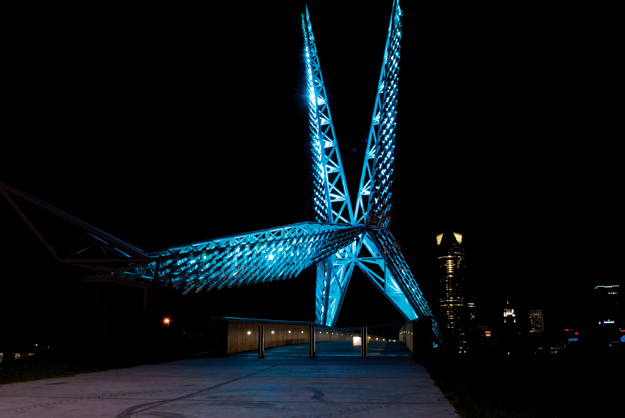 It’s a bird (sorta); it’s a sculpture; it’s a winner. The Oklahoma City SkyDance Bridge, officially unveiled in April, is already gaining nationwide acclaim: it was recently named one of the 50 best public art projects to debut in the last year by the 2012 Public Art Network Year in Review by Americans for the Arts. Inspired by the scissor-tailed flycatcher, its soaring lines are functional too, carrying pedestrians across I-40 through the two halves of what will soon be – thanks to MAPS 3 funding – a verdant park between downtown and the Oklahoma River.

Speaking of the new park,

The extra impetus to walk around outside should help since Oklahoma City was once again identified by the American College of Sports Medicine as the country’s least fit city in 2012, based on a calculus that includes factors like obesity, smoking rates and availability of exercise facilities. Fortunately, we rank better on some other lists: Gallup gave OKC the highest ranking on its 2011 Job Creation Index, Forbes named us 10th on its Best Cities for Jobs 2012, Kiplinger’s has us tied for 16th lowest on its cost of living index, and Farmers Insurance determined we’re #18 of the Most Secure Places to Live in the U.S. Maybe that helps explain why an online survey at careerbliss.com reported OKC as the third happiest city to work in nationwide…

WinStar World Casino, located just north of the Oklahoma-Texas border along Interstate 35, is almost finished with an ambitious slate of expansions and improvements. How ambitious? When completed around Labor Day, the casino floor will measure a whopping 442,000 square feet, making WinStar the second biggest casino in the world. Besides the extra gaming space, the expansion adds three new restaurants and a nightclub to the complex’s more than 6,800 electronic games, 112 blackjack and poker tables, 3,400-seat events center, 27-hole golf course and academy and 395-room hotel. It’s kind of a big deal.

Downtown Norman is about to become a bit more visually appealing. On behalf of the Norman Arts Council and the City of Norman, the Norman Public Arts Board is selecting two permanent outdoor sculptures to purchase for placement at the corners of West Main/ Webster and West Main/ Santa Fe, to enhance the busy intersections that visually anchor the downtown arts district.

The installations may be made of any material and will embody a theme representative of central Oklahoma – cultural heritage, the pioneer spirit, wildlife or flora, weather, really big pickups (it probably won’t be really big pickups)… the sky was the limit, and somebody’s imagination and execution will be rewarded August 27. After the unveiling November 9, the reward will be the community’s.

Oklahoma City’s artistic community remains a work in progress – as creative minds continue to experiment and express themselves, this summer has seen multiple venues open to share some of that work with the public. Casady Square at the corner of Penn and Britton is now home to The Art Group Gallery and Studio, a collective of creators in paint, pottery and jewelry, and Automobile Alley at 710 N. Broadway houses the ivc gallery, a display space and creative sanctuary operating under the tenet that art is essential. Stop into both galleries and welcome them to the neighborhood!