Lucas Ross: The Man With the Banjo - 405 Magazine 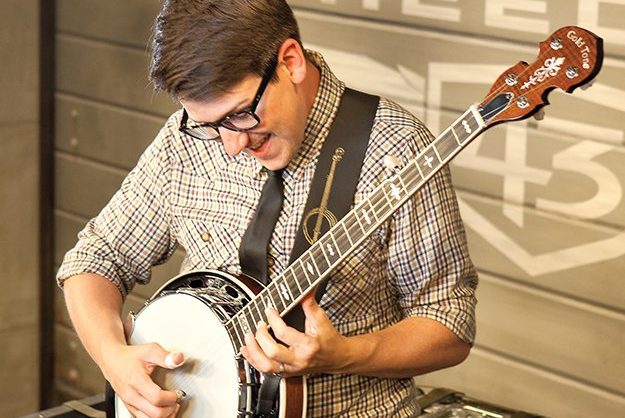 Oklahoma City Comic Personality Lucas Ross has found the perfect home for himself – not inside a water tower, but on the air for local television stations KFOR and KAUT, where Ross is best known as half of the Emmy Award-winning “2 Movie Guys.”

More recently, Ross has brightened the sets of “Rise and Shine” on KAUT, as well as KFOR’s “First News at 4:30” with the kind of high jinks that liken him to memorable, local television royalty such as Danny Williams and John Ferguson.

Emmy Award and accolades notwithstanding, Ross still identifies himself as a “son of a beekeeper.”

What’s your hometown? Minco, a modern-day Mayberry. The land of milk and honey – dairy cows and bee farms, you know. My parents are beekeepers, which makes me a son of a beekeeper.

You must be a legend in Minco. Have they painted your name on the water tower yet? No, but I’ve suggested it, now that I know I won’t have to live in it. When I was a kid, I thought Garth Brooks lived in the Yukon water tower because it said, “Home of Garth Brooks.”

Are you married? Yes, to Aubrey. We have two boys, Henson and Simon.

Any significance to those names? Yes. I’m a huge fan of Jim Henson (of Muppet fame) and Paul Simon.

I do see a lot of Muppet action going on – the huge Kermit painted on your office door, your phone cover, assorted memorabilia. I’m what you might call a “Muppet snob.” There are a lot of us out there.

I’m used to seeing you on KAUT with your “2 Movie Guys” partner, Ryan Bellgardt, but I’ve been spotting you on KFOR a lot lately. You’re busy! Yes. Lately, I’ve joined KAUT in the morning for “Rise and Shine” and I’ve started doing a segment called “Look Out! It’s Lucas” during “First News at 4:30” with Linda Cavanaugh.

Basically, you’re paid to play all day. Yes, but I get paid with Monopoly money.

Didn’t “2 Movie Guys” win an Emmy award? We did! Our “Intergalactic Holiday Showdown” won an Emmy for best Arts/Entertainment or Program/Special last year!

Where is the trophy? It’s actually on my son’s dresser, next to a trophy he got for gymnastics. He was so proud that he got a trophy, too. He said, “Dad, now we can put our trophies together!”

The promo with you and Ryan as Archie and Edith Bunker should win an Emmy! It’s hilarious! I recently learned that I’ve received a nomination for the “Performer/Host/Moderator” category for this year’s awards. The “All in the Family” spoof [see it on YouTube!] was entered, along with my Brad Pitt “Chanel 4” parodies, songs from “Rise and Shine” and Antenna TV “Time Travel Television” promotions.

What did you get in the most trouble for when you were young? Talking too much and changing the subject. Hey! Check out my banjo!

I’ve seen you play the accordion, too. Did you teach yourself? Yes! There’s no faster way to clear a room.

What’s your greatest fear? That I’ll die in an embarrassing way and the news anchors will start laughing when they report it.

Do you have any other phobias? I own the “Worst Case Scenario Survival Handbook.” The biggest is vomit. I don’t think it’s funny in movies and I can’t stand it when someone appears to be on the verge.

What song on your iTunes account has had the most plays? Well, let’s just take a look here. Oh, sure. “Sukiyaki” by Kyu Sakamoto. All the chords come together and then it resolves. Sadly beautiful. I have no idea what he’s saying.

What are you unable to resist watching on TV? “Golden Girls,” even though I have them all on DVD. Also, old reruns of “Newhart.”

What do you still have on your bucket list? I’ve done one big thing on my list, which was to meet my idol, Steve Martin. I think I said something like, “Uhhhh, bleh, ahem, uhhhh, ohh, ah, bleeek,” when I finally met him. I’d like to work with the Muppets in some way. And make a banjo/accordion album.

What do you hope people won’t assume about you? That I don’t have true compassion for people.

Who should play you in the movie they’ll certainly make about your life? Dame Judi Dench is pretty versatile, as is Meryl Streep. I’d let them fight over the role.

If you could have another name, what would it be? Gern Blanston.