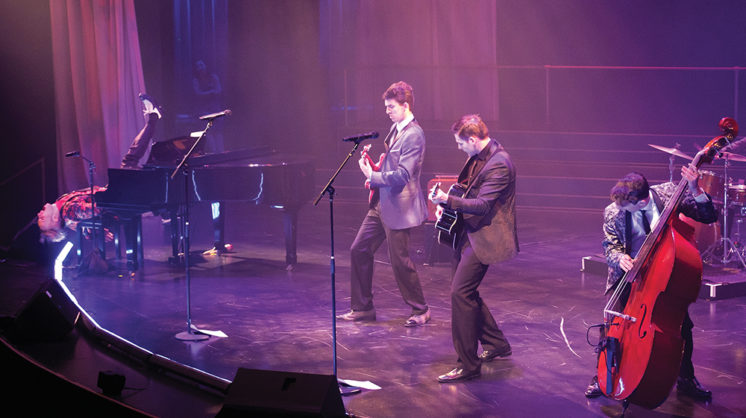 An all-star group portrait inspired by a fabulous true story, a collection of highlights from fairy tales and lore, a grand romance that features the best side of America – there’s a lot to love at the Civic Center this month, thanks to the summer season of musicals supplied by Lyric Theatre.

Solid Gold Sound It was a magical moment: On Dec. 4, 1956, four of the biggest stars in the early days of rock and roll got together to jam in Sun Records. That brief commingling was the inspiration for this raucous musical combining the greatest hits of Johnny Cash, Jerry Lee Lewis, Carl Perkins and Elvis Presley, as Lyric rocks along with the “Million Dollar Quartet” (through July 1). The show is Lyric’s first collaboration with Austin’s ZACH Theatre, and directed by ZACH’s Dave Steakley.

Dream Weavers A young girl’s imagination is the key to connecting the worlds of Ariel, Mulan, Mowgli, Rapunzel and more in Disney’s “When You Wish” (July 11-15), a new stage adventure powered by the award-winning and deeply cherished songs from Disney’s decades-deep musical library. With Lyric’s Michael Baron directing, it will be thoroughly magical.

True Romance The classics never go out of style, but sometimes a re-envisioning can showcase them in a new light, as with star-crossed lovers Romeo and Ju-er, Tony and Maria, in the passionate “West Side Story” (July 25-29), a beloved musical that also reminds us America is a country of immigrants. Guest directed by Matthew Gardiner, with plenty of finger snaps.

Getting swept away by any of these doses of story and song is simple: for tickets and other relevant info, visit lyrictheatreokc.com or call 524.9312 … and enjoy the magic.