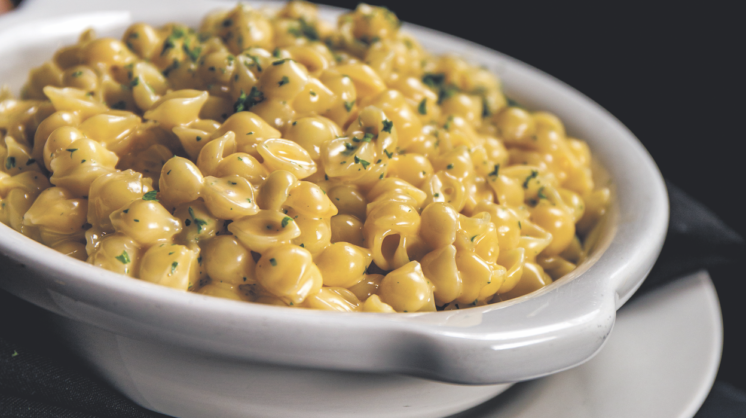 Ask people what kind of macaroni and cheese they ate growing up and their answer will get you close to their age. The transition from commodity cheese – part of the food allocation that preceded food stamps — to Velveeta to Kraft in a box marks three different generations. In fact, mac ‘n’ cheese is one of those foods, like mashed potatoes or fried chicken, that has the ability to bring us all happily to the table, even if we might quibble about the proper way to make it.

As part of the Best Steakhouses this month, we looked at mac ‘n’ cheese from the city’s prime steakhouses, but it didn’t take long to figure out that the best versions of that dish aren’t in the steakhouses. (We understand the risk of saying “best” where something as deeply personal as macaroni and cheese is under consideration.) While Chef Jeff Holloway’s ode to shells ‘n’ cheese at Boulevard Steakhouse (505 S. Boulevard in Edmond) is stellar, the dish at The Hamilton Supperette and Lounge (12232 N. May Ave.) was the favorite.

“We were going to go with a radiatore pasta at first,” executive chef-partner Michael Paske says, “but after doing a few pop-ups, people kept telling us they preferred tubes.”

Perhaps the tubes go back to the classic elbow macaroni and cheese of our collective childhoods; they were the default pasta for generations of kids, even the weird microwave mac ‘n’ cheese. Paske grew up on “Kraft from the box,” and even admits to liking it a little even now. “It’s nostalgia, absolutely,” he says.

“My great-grandmother used to make a house Boursin cheese for her macaroni and cheese, and that’s the inspiration for ours,” he continues. “Old-school Boursin was cream cheese and sour cream, so we’ve modernized ours quite a bit, and we use cavatappi to get the ridges and tubes that hold onto cheese so well.”

The Press, at 1610 N. Gatewood Ave. in the Plaza District, uses radiatore pasta for its sharp, tangy mac ‘n’ cheese, which also was a favorite — like the cavatappi, those noodles hold onto a ton of cheese. It also is available with chili or buffalo chicken. However, while delicious, toppings or additions should not be used to judge the base dish. Mahogany (two locations) has lobster mac and cheese. The crispy parmesan bread crumbs on top add a nice texture and the lobster is of course delicious, but the five-cheese blend got lost in all the cream.

Chef Shelby Sieg of The Pritchard (1749 NW 16 St.) is a fan of radiatore pasta, too, mainly because of “all the grooves.”

“The real challenge of radiatore is not to overcook it,” Sieg says. “It will fall apart quickly. I used Gruyere and fontina at home, but you can use any blend you like to get the flavor you want. There really are no rules.”

A pleasant surprise in the taste testing was the baked mac ‘n’ cheese at Carican Flavors, 2701 N. Martin Luther King. The cheese on top overcooks just a little, giving the dish a crunchy, darker flavor on top before you dive into the soft creaminess below. Other standouts included Off the Hook (two locations), Iron Star (3700 N. Shartel Ave.), Nashbird (1 NW 9 St.) and The Mule (1630 N Blackwelder Ave.).