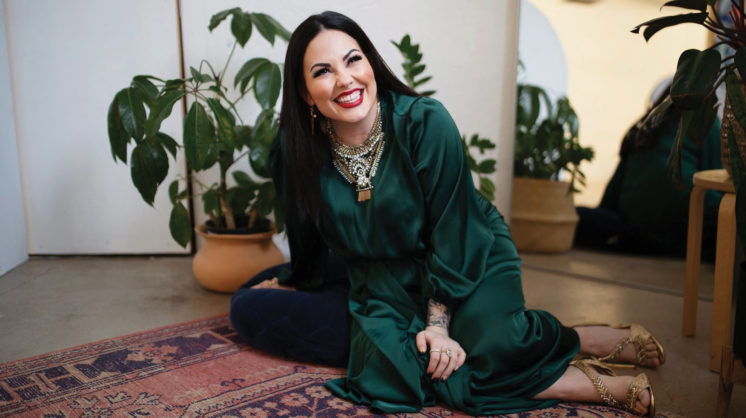 Scarlett St. Clair has a looming deadline to meet. But that doesn’t keep the USA Today bestselling author’s infectious laugh from spilling out. “I’ve got until 3 p.m. tomorrow,” she said. “I’ll do the best I can with the time I have left.” The book she works feverishly to finish is the long-awaited second book in her Adrian & Isolde series, Queen of Myth and Monsters, which is expected to be released in December. Her first book in the series, King of Battle and Blood, was an editor’s pick for best science fiction and fantasy for Amazon.

When asked about her reputation for writing complete novels in mere weeks, St. Clair explains that that time frame isn’t the whole story: she spends lots of time prewriting and planning themes and character arcs. She is currently writing two beloved book series: Persephone & Hades and Adrian & Isolde, a task she has firmly in hand.

St. Clair grew up in Eufaula, Oklahoma, where she became a voracious reader in middle school. “I was often made fun of for having a book to read wherever I went,” she said. She speaks warmly of how influential her teachers were in the trajectory of her writing life, from first grade to high school. In middle school, she began reading The Lord of the Rings over winter break. As soon as she finished, the 13-year-old St. Clair sat down at the computer and began writing her own fantasy novel. “I had fallen in love with fantasy and wanted to create my own world. I decided that writing was what I wanted to do for the rest of my life.”

St. Clair continued writing books and stories throughout her teenage years. “Isn’t it lovely that ignorance is bliss?” she said. “As a teenager, I wasn’t inhibited by people telling me that there’s no money in it, or that the odds of becoming a famous writer were slim. My dad was always so supportive of my choice to become a writer. He passed away in 2020 of COVID, but he always told me that I would become a famous writer, and I believed him.”

With a bachelor’s degree in English writing and a master’s in library science from the University of Oklahoma, St. Clair began to fuse her love of fantasy with Greek mythology. She saw mythology as a way to explain the world in both the past and present. “I wanted to take the Rape of Persephone and turn that into something that empowers women, rather than what continues to oppress,” she said. “I believe that is a noble endeavor.

“I once had my own defenses against romance novels; I find that ironic now,” she laughs. “It’s human nature to be intrigued by love, to desire love and companionship, and yet there is a part of us that always wants to make fun of desperate love. I never read romance until I started working in the library and a co-worker gave me a book. The main character had autism, [and] I loved the representation I saw in romance novels. Of all genres, romance has done the best at representing marginalized communities.”

When St. Clair became aware of what romance novels could do, she began to weave all her loves together: fantasy, Greek mythology and romance. As she began to publish her novels, she reached out to her fans over Instagram and Pinterest by publishing quotes, which eventually found their way to TikTok. “I went viral over TikTok before I was on TikTok,” she said. “That displays the power of word-of-mouth.”

St. Clair, who came up through self-publishing her works, has advice for her fans who are young writers. “Any time that you are told no, remember it is not a door closed,” she said. “You have to find your way to yes. Your path won’t look the same as everyone else’s.” The fantasy genre holds a great deal of hope. As St. Clair says, “What matters is that you keep trying, even when your heart has been broken.”