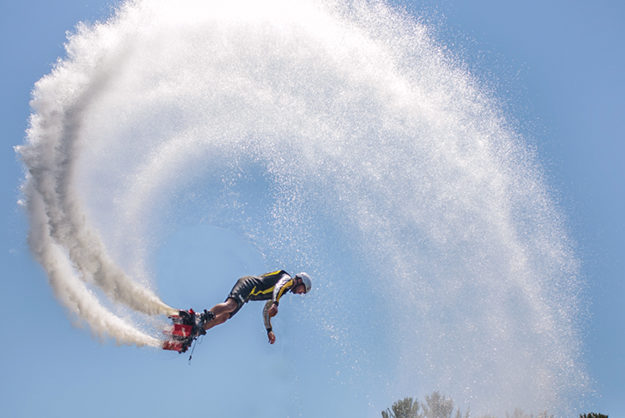 “Waterpark Capital of the World!” That’s what Wisconsin Dells boasts – and it’s probably right. But you can only stay biggest if you keep getting bigger, and Wisconsin Dells is doing just that. The town is so confident of its continuing prowess that they’ve had their nickname copyrighted.

Even before the first waterpark was built, the beautiful Wisconsin River and unusual rock formations attracted early tourists to the area. In the last quarter of the 19th century, noted photographer H.H. Bennett set up shop here. His amazing landscape photos attracted even more visitors. His most famous photo is of his son jumping five feet from a rock ledge across a 47-foot-deep chasm to a flat rock atop a slender sandstone pillar. The photo went viral – as fast as it could in 1886. And, of course, there were daredevils who wanted to try the jump.

Insurance companies put a stop to the stunts in the ’40s, but visitors can still see specially trained dogs make the leap. Bennett’s studio is now a museum.

After World War II, amphibious military vehicles were brought to the area. The Ducks had landed. Still in business as “The Original Wisconsin Ducks,” they trundle tourists along woodsy wilderness paths and into nearby waters. 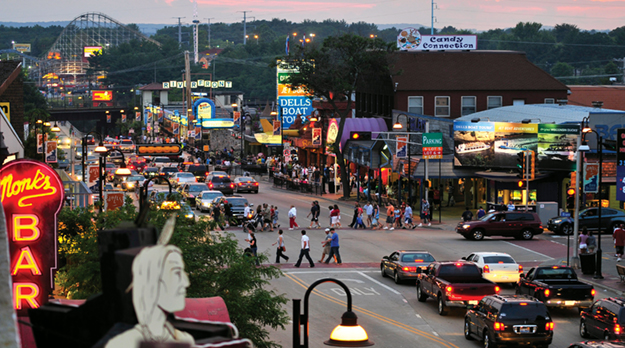 The big new attraction in the ’50s was the Tommy Bartlett Ski Show. Its founder has passed on but the show continues. Yes, there are lovely bathing beauties, skiing pyramids, jumping and barefoot skiing, but you’ll also see innovations like the water-jet-propelled fly board and the sky ski along with the antics of daredevil clowns.

In the late ’80s, a local resort owner saw a pool complex with some exciting extras that made plain pools seem passé during a visit to Texas. Considering the shorter summer season in Wisconsin, he and his partners decided to build a similar attraction but with a roof over it, creating the nation’s first indoor waterpark.

Now there are over 20 indoor waterpark/water playground facilities in the Dells – more waterslides per capita than anywhere else in the world. America’s largest waterpark, Noah’s Ark Waterpark, covers 70 acres and features three miles of waterslides. 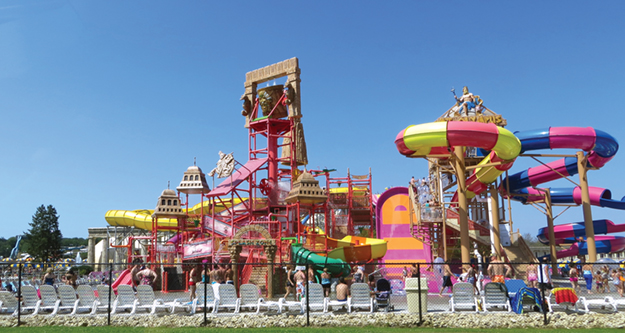 The Kalahari Waterpark Resort is Wisconsin’s largest indoor waterpark with 125,000 square feet, while the Wilderness Hotel and Golf Resort holds the record for the largest indoor/outdoor waterpark resort in the nation. The combined space is equivalent to 12 football fields.

This place is kid heaven – but bring your wallet. All the parks have added attractions: video games, gift shops and other opportunities to drop a few dollars.

Visiting the Dells can be a schizophrenic experience. Part of the town offers the Branson-strip experience – souvenir stores, quirky museums and fudge shops – and the waterpark attractions. And while I loved the fudge, it was the scenic beauty and the geologic history surrounding the tourist-y town that appealed to me.

Here’s a quick geology lesson. Zip back half-a-billion years to the Cambrian Period. This area was the sandy shore of an ancient sea. Over the millennia, the sand hardened into sandstone.

During the Ice Age, a great lake existed near here, a melted glacier dammed up by remnants of un-melted ice. About 15,000 years ago that ice dam failed and lake waters rushed over the sandstone, carving deep gorges and canyons.

There are many ways to explore the area – I chose the easiest. One of the best land tours is at Lost Canyon where a horse-drawn wagon ride wanders through a mile of narrow gorges squeezed by towering cliffs. Some places were so narrow that I couldn’t see how the horses – a pair of massive Percherons – would get through. 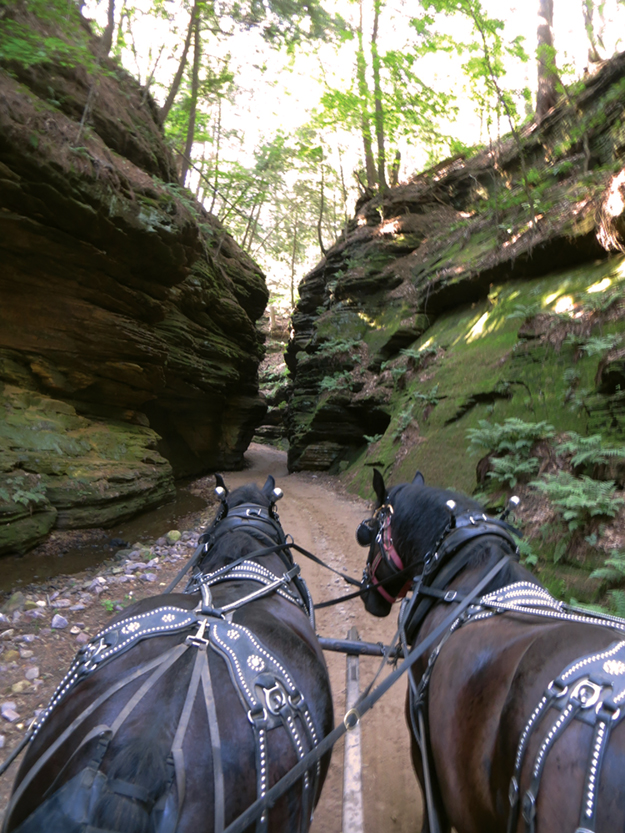 The Duck tour goes through similar, though not as dramatic, terrain, but you’ll also see some of the river and Lake Delton.

Both the Lost Canyon tour and the Duck tour were short compared to the Dells Boat Tours cruise. This two-hour, 10-mile round-trip takes you upriver from downtown Wisconsin Dells.

In addition to the scenery you’ll see while relaxing on the boat, there are two stops to stretch your legs. The first, Witches Gulch, is a narrow canyon with high, layered sandstone walls. The next features Stand Rock where, weather permitting, you will see trained dogs making that historic leap.

For the Birds – and Beasts

The International Crane Foundation, founded by two ornithologists with the lofty goal of saving the world’s cranes, is a bonanza for birders. This is the only place in the world where you can see all of the world’s 15 crane species. Necessary fencing makes photography tricky but the whooping crane enclosure is blessedly free of annoying barriers – and the majestic birds posed regally while seeming to ignore us. 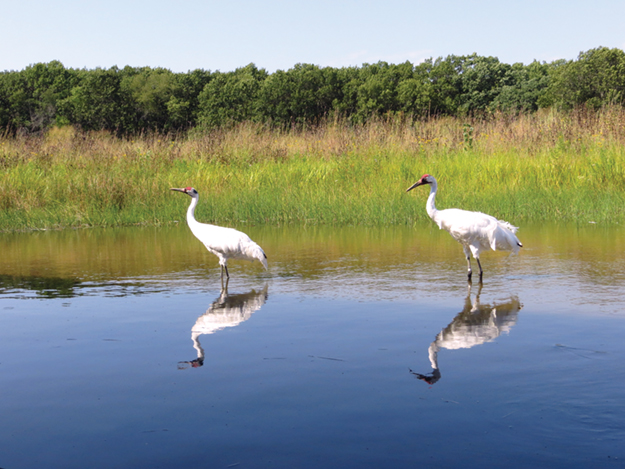 One of the town’s newer attractions is Timbavati, a wildlife park and a work in progress. The staff here is great and you’ll have a much more personal animal encounter than most places. Before my visit was over, I’d bottle-fed a baby camel, petted a zebu on the head, fed an eland and served carrot sticks to several greedy giraffes. 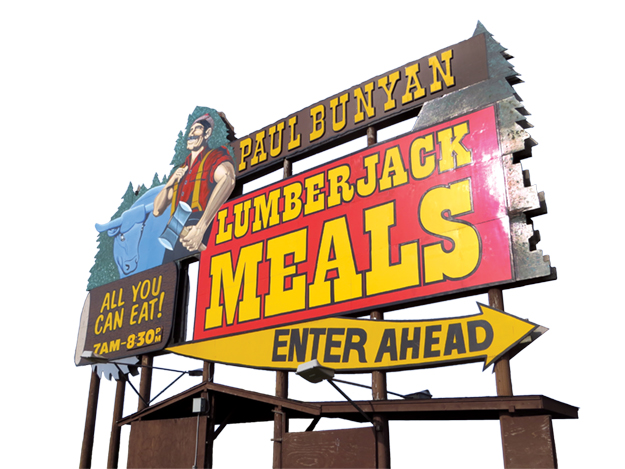 Burgers, brats and their own beers. Or go for their home-brewed root beer.

Pizza and beer but don’t miss the beer cheese soup. Worth a stop for a picture of the little red delivery car with the moose on top.

“Steakhouse/supper club with a modern edge” in business for over 70 years. Great food and super service leads to longevity.