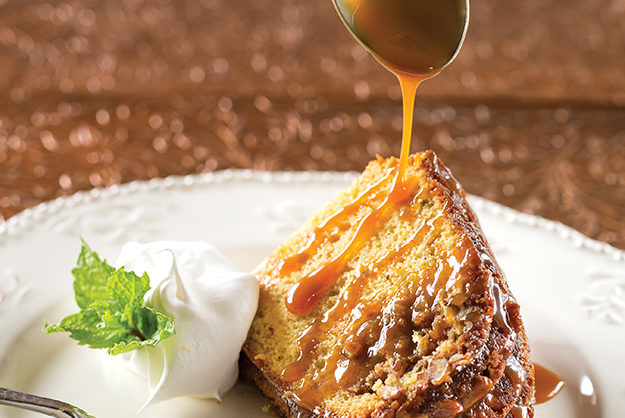 It Just Wouldn't Be The Holidays Without Rum Cake. This super moist version has been a fixture on my table since I was a kid. Mom would make numerous cakes to take to parties or serve at holiday dinners, and would even deliver one to our priest each Christmas. So, when I went off to college and Mom gave me a recipe box filled with her favorite recipes, I am sure she was hoping I would someday cook a few of these. Well, this particular one has served me well for many years! It was my best seller when I cooked out of my home selling cakes and pies to friends and family. Some of my patrons even requested I not “cook” out the rum in the glaze and just pour it over straight out of the bottle – made for a very merry cake!

Preheat oven to 350 degrees. Spray a Bundt pan well with nonstick cooking spray. Sprinkle 1 cup of chopped pecans in the bottom of the pan and set aside.

In a large mixing bowl combine the cake mix and pudding. Stir well. Using an electric mixer, beat in the eggs, water, ½  cup rum and canola oil. Mix for 2 minutes until there are no lumps. Set aside.

Make the filling by using a medium-sized bowl to combine the graham cracker crumbs, remaining pecans and 2 tablespoons rum. It will be very thick, which is perfect.

Assemble the cake by pouring half of the cake mix into the Bundt pan, spreading it out evenly. Place a “snake-like roll” of the filling mixture in the center of the cake batter in Bundt pan. Continue the filling all around the center of the pan and then top with the remaining cake batter. Bake for 50-55 minutes or until toothpick comes out clean from the center. While the cake is baking, make the glaze by using a small saucepan to simmer the butter, sugar and rum until it comes to a boil. Remove from the heat and set aside.

Allow the cake to cool 5 minutes and then invert cake onto a serving platter. Brush cake with glaze all over. Continue until all of the glaze is used. Cover and allow to sit for at least 24 hours before serving.