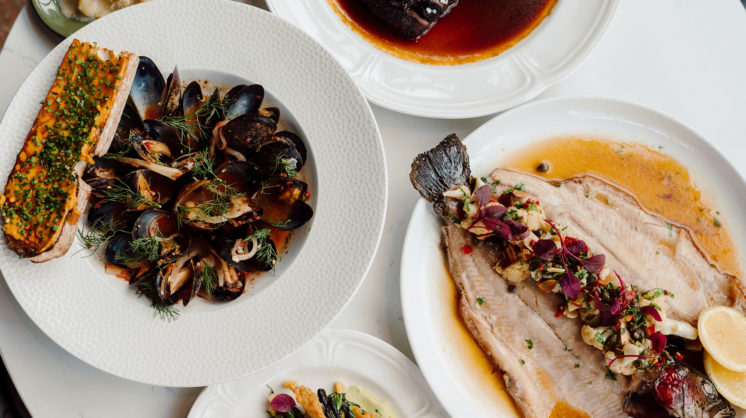 Mary Eddy’ has had two lives so far; the first began in 2016, and the second in October 2021. The original space—part of the 21c Museum Hotel—reflected the repurposing of the old manufacturing facility: expansive, cavernous, industrial, a little cold in spite of the beautiful art on the walls. Really, though, that was the main dining area. The lounge up front was mainly known as a cocktail bar, a holding space for customers awaiting a table, and the home of a huge, intricate, artistic clock. (Still miss that clock.)

The 19 months Mary Eddy’s was closed allowed its team to rethink the layout and the heart of the restaurant. Under executive chef Jason Campbell—now running one of Orlando’s best restaurants—the food was stellar, but the space never made sense, except for the open kitchen. That’s the only thing you’re likely to miss about the new space, and Chef Jeff Patton is a worthy successor to Campbell’s delicious menu. The lounge is now the restaurant, and the cavernous space will become two different concepts, a pool bar and a bodega, later in 2022.

The new Mary Eddy’s, in the words of food and beverage director Kyle Kern, is an homage to the golden age of dining. It’s also a smarter, lovelier, more compact space that helps fill one of the Oklahoma City dining landscape’s pressing needs: a genuinely and unapologetically elegant space for dinner. The genius of Mary Eddy’s new look emerges after sundown, when the lighting, combined with dark woods and industrial touches like the original manufacturing floor pillars—concrete behemoths that somehow manage to blend in— creates a welcoming glow, carving out shadowy niches that feel private in a very public space.

Add one of the city’s best hospitality teams to the mix, and all the promise and excitement of 2016 Mary Eddy’s is renewed. The team includes the aforementioned Kern and Patton, as well as the city’s best working sommelier Eric Berumen as beverage director and an omnicompetent, professional and gracious manager in Jacqueline Callaway. That also provides the restaurant with another rarity in the metro’s dining scene: a concept that excels at service, food, wine, and spirits.

“Our cocktails are in keeping with the golden age of dining focus,” Kern said. “They’re all classic cocktails, but they feature a modern or artistic twist. We also set out to have ‘the’ martini in OKC, and I think we’ve succeeded. Using locally owned and produced Wanderfolk Spirits was our number one option, and so we use its Garden Club gin to create an avocado washed gin for the martini. It adds texture and richness to the cocktail, and we get to incorporate the story of another great local producer into our program.”

Berumen’s by-the-glass wine list is easily among the best in the city, and the focus is low intervention wines from major growing regions, as well as some lesser known areas like Slovenia and Swartland, South Africa. For the varietals popular in Oklahoma, Berumen goes for producers with lower name recognition than the usual suspects, but higher quality with lower price points. It’s an excellent, forward-thinking, current list that doesn’t disrespect fans of traditional varietals.

Breakfast started up again on Feb. 1, and the menu features a proper breakfast sandwich: fried egg, bacon, and cheese on a potato roll. Simple, delicious, classic, and a feature we’d like to see on more menus. The breakfast menu is short and focused, catering to traditional breakfast fans—think eggs, bacon, sausage, potatoes—as well as healthy eaters.

Patton’s dinner menu is the star of this operation, though, and the choices and quality indicate a chef who has found his voice. Patton worked with Campbell before moving to another operation, but after Campbell departed, the restaurant hired Patton as his replacement. The chef, mostly known in the past for his brilliant charcuterie, is talented in many areas, and the showstopper on his menu is the whole trout.

“I love trout, but you don’t see it on very many menus in Oklahoma, and you definitely wouldn’t find it served this way,” Patton said. “This way” means a whole trout fileted and served splayed with roasted cauliflower, capers, toasted almonds, and brown butter. It’s a delicious reminder that we shouldn’t give more attention to freshwater varieties, and that fish served in striking fashion is still fine dining.

The bread service is sure to be popular, but the standouts on the appetizer menus are the steak tartare and the mussels. Patton’s attention to detail and commitment to bold flavors manage to brighten up something as drab as broccolini; crispy cheese helps. The sides’ champion, though, is the oyster mushrooms served with pecan gremolata. It should be the first thing you order,
honestly. The menu is rounded out with steak, pork, chicken, and vegetarian options, and it’s truly impossible to go wrong.

1 Weekend Roundup: May 13-15
2 10 Sushi Joints You Need to Try Now
3 Home and Garden Tour in Historic Miller Neighborhood
4 The Unexpected Mix is Key for OKC Home