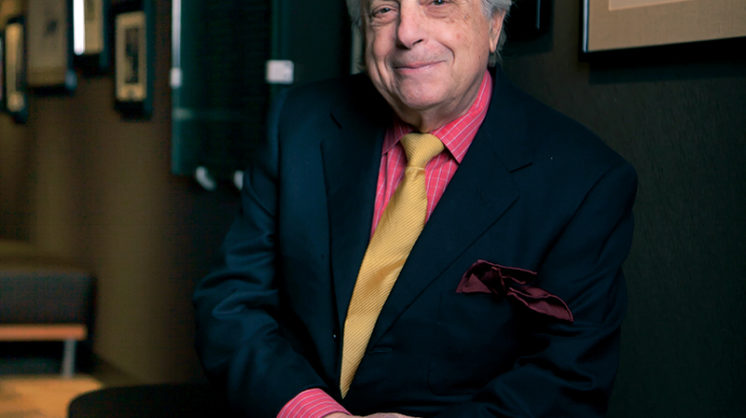 His grandfather, Berty Weitzenhoffer, was an Austrian immigrant who settled in Lexington, Oklahoma Territory, in 1885. The Weitzenhoffers have been here ever since. Young Max grew up in Oklahoma City, attending Edgemere and Nichols Hills Elementary Schools and Casady before enrolling at OU.

“I didn’t really know what I wanted to major in,” he says. “In those days everybody enrolled in the Field House. All the professors were sitting around in their tweed jackets with signs that said ‘English Department,’ et cetera. I looked over and saw this professor in an orange and black Hawaiian shirt. There was a sign that said ‘Drama’ and I thought, ‘Aha! This looks like the best place to go.’ And that’s how I got in the Drama department.”

Weitzenhoffer’s attraction to the stage began when he was eight as the family spent summers in La Jolla, California. Theater-lovers, the family were regular patrons at the prestigious La Jolla Playhouse and he would hang around backstage, fascinated. Every summer, he worked at La Jolla, and by the time he graduated from OU, he was the company manager. He also found time for acting lessons.

“My teacher told me I was always going to be the hero’s best friend. And I decided that wasn’t for me,” he says.

Bypassing opportunities in Hollywood, Weitzenhoffer’s next stop was New York, where he found friends and mentors like producer Morty Gottlieb and actor Alfred Drake. Bernie Jacobs, president of the Shubert Organization, taught him about running theaters.

“He taught me about relationships. He knew every member of his organization and knew about their families. That was extremely important,” he says. “In our theaters (Nimax), we have 200 employees. You’re totally dependent on the people who work for you. It has to be a family, not just a corporate structure.”

“If a show has quality, you’ll find an audience.”

After 30 years in New York, numerous Tony nominations and two Tony awards – for “Dracula” (1977) and “The Will Rogers Follies “(1991), Weitzenhoffer began concentrating more of his efforts in London. He and his partner in Nimax Theatres, Nica Burns, own six of the most important theaters in the English capital.

“They (the English) like the spoken word and musicals,” he says. “If a show has quality, you’ll find an audience.”

During a visit to Oklahoma in 1994, he came up with the idea of establishing a musical theater program at OU. He and Greg Kunish, the head of the Drama School, set up offices in Carpenter Hall. They had no faculty and no students.

“We just went around campus grabbing people,” he says.

For a premier project, Weitzenhoffer brought in actor John Cullum and a Broadway director to present “Jack,” a musical about John F. Kennedy. Students filled in the other roles and did the technical work. This brought wide recognition to the program, which today has become one of the country’s leading musical theater schools.

Since moving back home to Oklahoma in the ‘90s, he’s invested heavily in OU’s arts emphasis. But he’s modest about his long list of accomplishments.

“I’ve had a career being able to do what I wanted to do. I’ve employed a lot of people. And I’ve done a lot of things that a lot of people have gotten pleasure out of. And,” he says, “a lot of it was luck.”