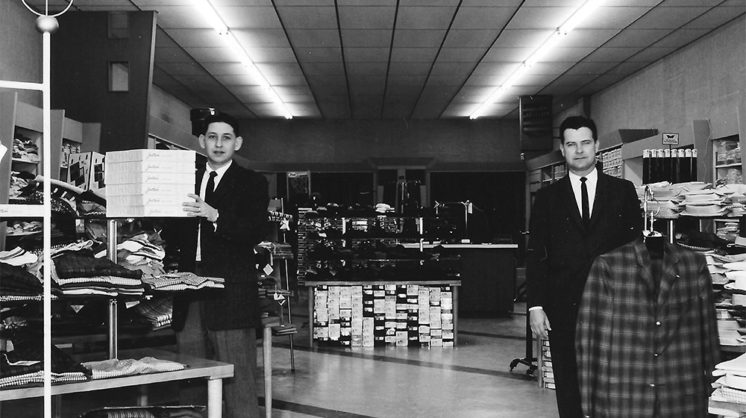 More than half a century ago, Edmond’s traffic was lighter, its population was smaller – the city overall had a different vibe than it does today. But through all its growth and changes, Edmond’s downtown area has remained the heart of the city. Stores such as Anthony’s, Vann’s Bakery and Snyder Hardware have all come and gone, but one constant remains, and that is McCall’s Menswear. Located at 21 S Broadway, McCall’s opened in March 1953 – this month the store celebrates its 65th year in business, making it Edmond’s oldest retailer.

Right after World War II, Morris “Hoot” Gibson graduated with a master’s degree in retail from New York University. He came back to Oklahoma, and went to work for S.K. McCall & Company in Norman.

“My dad had worked in New York for a while, and when he came back to Oklahoma, that’s when he began the partnership with Louis McCall,” says Gibson’s son, Steve. “Dad thought Edmond was an up-and-coming location, but the only space he could find in the downtown sector was an old pool hall. He renovated that, and today we are still in the same location.”

In the early 1980s, Gibson said, his father purchased the entirety of the McCall’s shares and became sole proprietor, branching out into women’s, children’s and juniors’ clothing.

“When we first opened in 1953, men’s styles were very traditional,” he says. “Men wore suits to work, and very little casual clothing was sold. Times began changing, however, and the younger generation was wearing Bermuda shorts and knee-length socks, opting for a more ‘preppy’ look. We have always been rooted in traditional style while keeping up with the modern trends.”

As Edmond grew and the big-box stores started coming in, Gibson remembered seeing many of the locally owned retailers close.

“Those big stores, the internet, over-retailing and family interests have all attributed to the decline,” he says. “At some point, all we will have left are non-local businesses that send all their profits out of town [and] don’t contribute to the tax base.”

McCall’s, however, found a niche among the big stores, and that is quality and tradition.

“A few years ago, one of our customers came in with a navy blue suit he had bought from us in 1953,” Gibson says. “The style was very similar to the suits we had in stock. Today, we continue to be a strictly high-quality menswear clothier with a modern yet traditional style.”

Exceptional service and the quality of their merchandise are the cornerstones of McCall’s business, and Gibson said that is what has kept their customers coming back for 65 years.

“We are an old-style retail store that is totally rooted in customer service,” he says. “We sell quality, we assist in the client’s selections and fit their garments properly. That is important, because our clients are our friends and neighbors we see on a daily basis, and we want them to feel good in their clothes. Edmond has been a wonderful town for my dad to put down our family’s roots, and it’s been a great place for me and my sisters to grow up.”