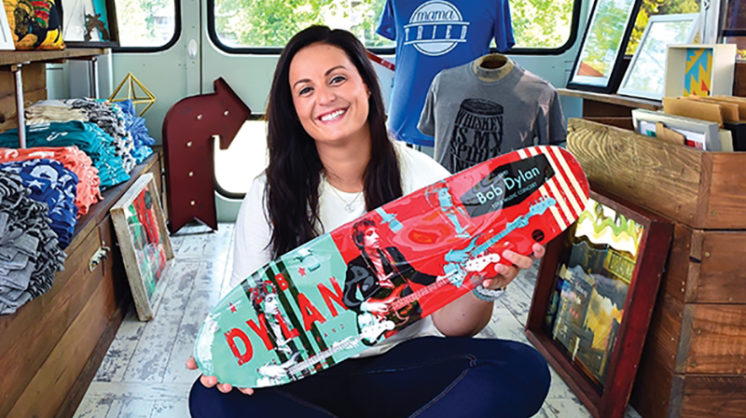 The food truck phenomenon took off in Oklahoma in a way that not many could have predicted. In just a few short years, it’s grown from a novelty into an integral part of a burgeoning street festival scene, providing Oklahomans with not only new culinary and entertainment pursuits, but unique business opportunities, as well.

Midtown’s H&8th, a monthly street festival situated at NW Eighth Street and Hudson Avenue, serves as a stellar example of how Oklahoma can take a common practice and put a unique spin on it. Not only is H&8th one of the region’s most popular street festivals, it’s become one of the largest in the U.S., regularly hosting thousands in what has, essentially, become a mini-village that pops up on the final Friday of each month.

Other food truck-based festivals abound – Edmond’s Heard on Hurd and Premiere on Film Row are two popular choices – and their standard dates have been staggered well enough that those who long for the atmosphere of a pop-up festival can find one on practically any given week of the month.

Food trucks alone can provide the base for any good festival, but the addition of mobile businesses to the mix arguably has built the Oklahoma street festival into its fully actualized self. The ability to walk around, listen to great music and browse through a few businesses – shopping for art or clothes, or playing games – extends the experience into something beyond standing and enjoying good food. 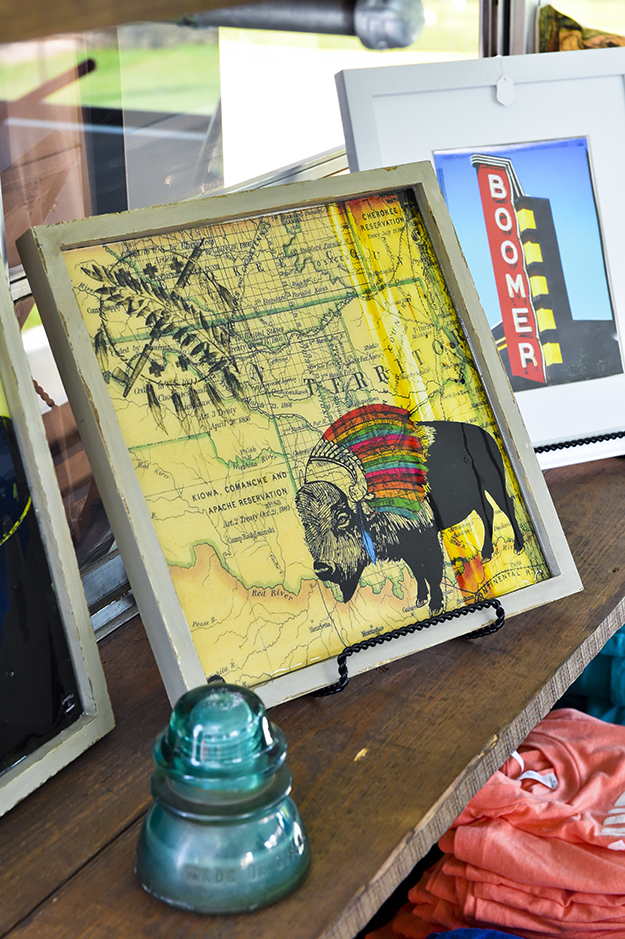 Oklahoma City’s large area and low population density make it difficult for many to experience some of the typical metropolitan benefits, like the ability to walk from your front door to a coffee shop, boutique, eatery or concert venue. Efforts have been underway for quite a while to beef up public transportation and make Oklahoma City more walkable, more amenable to outdoor activity and more district-focused, with some eye toward building more of that into our infrastructure.

But there will always be limits as to how much a city can change, and there’s much about Oklahoma City that’s fine the way it is. The ever-expanding list of street festivals (and their growing roster of mobile businesses) have given some of us a chance to condense our community once a month and get a taste of concentrated urban life, while giving some others a chance to test the waters of small business ownership, in an atmosphere with significantly reduced overhead and a ready-made audience.

The addition of Industry Flea – a booth market where vendors sell everything from vintage goods to old records, stationery or stuffed animals – to the H&8th event added one such opportunity maker, as well as the benefit of yet another chance to shop local, in a micro sense. But other independent mobile businesses have popped up as well, giving a depth to the street festival marketplace that not only illustrates its positive impact on the state’s culture, but possibly cements its status as a new fixture in our metro’s landscape.

We’ve highlighted a few stand-outs here, pop-up entrepreneurs and artists who are helping to build the local movement, and possibly adding to the phenomenon that has helped our wide-spread population feel just a little closer for a few nights a month.

MaKayla Mattingly had been selling her art and T-shirts through booths at local fairs and festivals for several years when inspiration struck: Why not just develop a self-contained vehicle to peddle her wares?

Enter The Struggle Bus, Mattingly’s pale blue gallery on wheels. The moveable shop meant no more laborious breakdown and setup (welcome news for Mattingly’s father, who was helping her do both), and the ability to just pull up to any venue and open the door.

“I actually had the idea for the mobile shop when I visited some friends in Dallas,” Mattingly says. “Dallas has amazing festivals and parks where there are always food trucks and vendors out and about. Lucky for me, Oklahoma City is starting to become an awesome, artsy area much like [Dallas].”

Mattingly is encouraged by the rise in popularity of street festivals, and believes that it bodes well for her business. 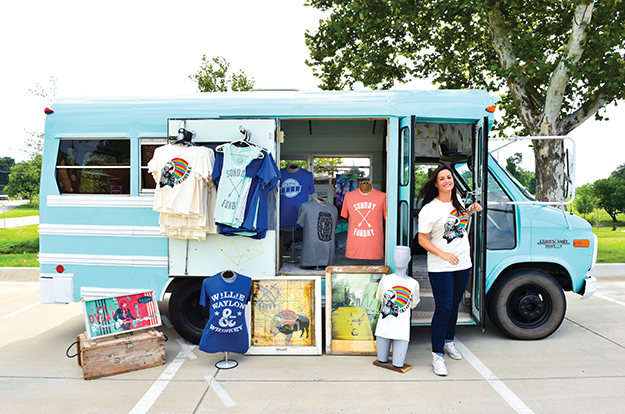 “It’s very exciting to see that my style and mobile shop will fit in perfectly with things like Live! on the Plaza, Paseo Art Walk and H&8th,” she says.

And her style most certainly fits with any gathering of assorted Oklahomans.

T-shirts and other items emblazoned with things like the old Indian Territory map, a dreamcatcher and a buffalo, or a single line from an old beloved song (“Mama Tried”), Mattingly tries to imbue her creations with a state pride that captures, in her words, “the essence of being an Okie.”

Verse supplied while you abide

In 2014, Chad Reynolds and Timothy Bradford wanted to start a reading series, but didn’t want it to be a typical reading series. (You know, only attended by … reading series types. Not that there’s anything wrong with that.)

With an eye toward creating something that would reach the general public, and with a written form that has generally fallen out of vogue (poetry), Reynolds posited the idea of something akin to Chicago’s Poems While You Wait. (Reynolds is a friend of the founder, Kathleen Rooney.) Bradford thought it was a great idea, as did H&8th director Brian Bergman, so Short Order Poems began dispensing verse that year. 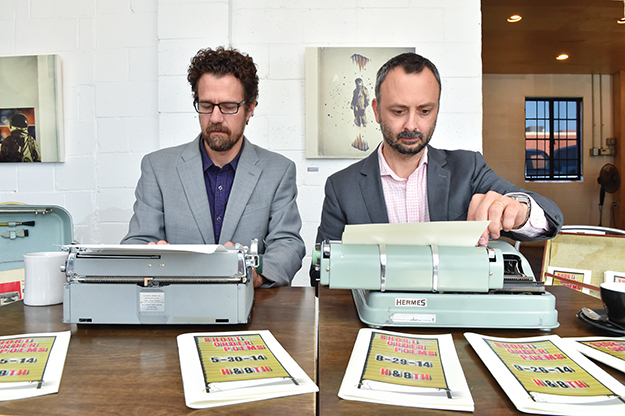 Patrons can visit the Short Order Poems table, fill out a form stating their desired subject matter, and return within 10 or 20 minutes to find a personalized poem, pecked out for them on a vintage typewriter.

The poets have appeared in other festivals – notably deadCENTER and Art Moves – but H&8th is, in Bradford’s words, the group’s “bread and butter.”

“There’s nothing like H&8th,” Bradford says. “The crowd, the atmosphere, the energy and the demand. We and the guest poets write between 40 and 60 poems in four hours, which is pretty amazing.” 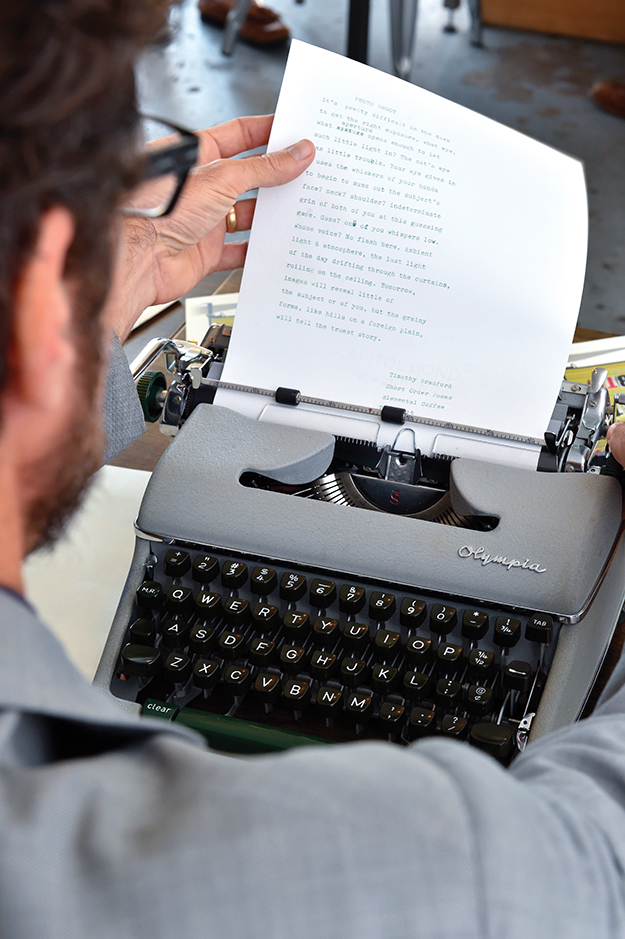 Guest poets have included a number of published and well-respected artists, including Kerri Shadid and Oklahoma Poet Laureate Benjamin Myers.

“Art, culture and the power of words. Plus, we’re directly communicating with our readers about something that matters, often deeply, to them,” he says. “We hope to remind people of the power and play of language. It is meditative, redemptive and joyful, but it requires attention and patience.”

Fashion on the go

Heather Parsons’ Fashion Merchandising degree initially led her into a standard industry position with a designer in New York. Longing for home and family brought her back to Oklahoma; a desire to do her own thing led her to investigate opening her own business; and the results of her research sent her scurrying into a job with an investment firm. But boredom with the button-down world eventually drove her back to her dream, and after a return to school for a Master’s in Entrepreneurship, Parsons felt she had the knowledge and planning skills to take the plunge of becoming a boutique owner. With a twist.

Instead of a brick-and-mortar store – with its significant overhead and dependence on demographics for success – Parsons elected instead to create a boutique on wheels, The Cargo Room.

Eighty-four square feet of charming clothing and accessories brightly lit through a large window and containing a diminutive dressing area, The Cargo Room is a marvel of interior planning holding a wealth of stylish offerings to browse. 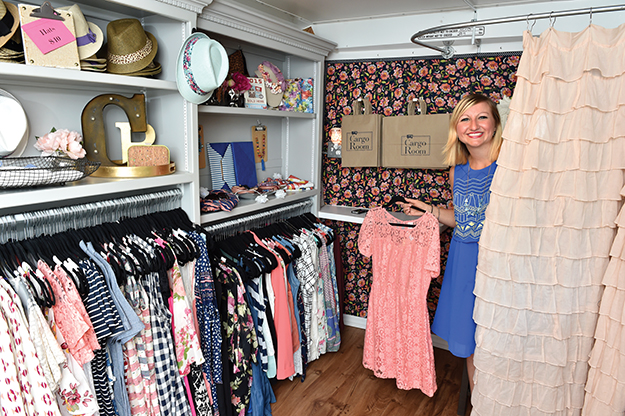 Parsons loves the opportunity to both develop a faithful following, and introduce herself to new customers at every event. She gives partial credit to the food truck boom for giving her the idea of a mobile boutique.

“I looked at the food trucks, how much support Oklahoma has provided them,” Parsons says. “I thought it was a great opportunity for me to do something and get in on it, too.”
As a mobile business owner, Parsons is also grateful for the chance to take part in a new and exciting development in the city’s social and economic life.

“I’m amazed at how much support has been given to this idea, of local, mobile businesses. I think maybe 10 years ago, this wouldn’t have been possible. The direction our city is moving in, the opportunity it’s giving us … I feel very blessed to be a part of it.”

The sight of a large shipping crate with the word ESCAPE emblazoned on it might not seem like something you’d want to jump into, but if you’re looking for a way to add fun to your street festival experience, you should.

A pared-down, mobile version of The Escape, a metro-area live action escape game where different scenarios are housed in rooms, The Escape Crate offers a quicker (15 minutes) and smaller version of its brick-and-mortar counterpart. Two to 4 players can hop in and take their best shots at solving the riddles and puzzles that will allow them to escape the crate – which is fully furnished and air-conditioned, just in case you were wondering. (And yes, they let you out even if you don’t solve the puzzles.)

Built out of an 8-foot by 20-foot shipping container, The Escape Crate represents another facet of the mobile business boom. While the “escape game” craze is one that’s sweeping the nation, The Escape Crate may be one of the first moveable versions, a distinction that The Escape’s marketing director, Bridget Trowbridge, explains came from a realization that their company needed to adapt in a few different ways. 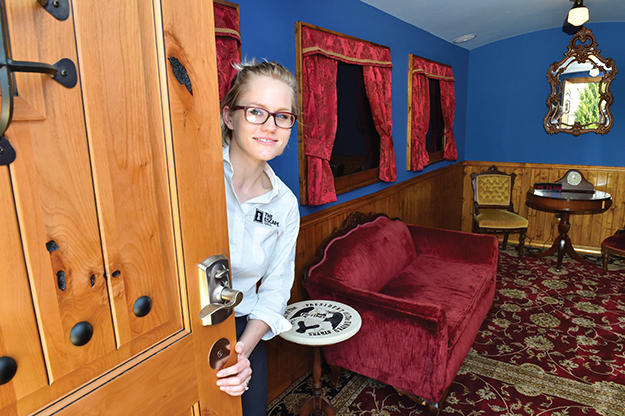 “First, we realized that traditional marketing doesn’t work for our product due to its unusual nature,” Trowbridge says. “People really have to try it to understand how to play the game. This gives people a small chance to try it out without fully committing to a full hour of game play.

“Secondly, we observed the influx of pop-up shops and food trucks, and thought there should be no reason our experience is limited to a store. We wanted to join in on all the festival fun, and it was worth it. We really enjoy the community atmosphere at OKC’s many outdoor markets and festivals,” she says.

“We also recognized that corporate team building, as well as private parties, are a good portion of our guests, and wanted to provide a portable solution to cater to special events. The Crate answered all of our problems, and while it turned out to be a much bigger build than expected, our creative team had a blast developing the game.”

The Crate definitely adds a dose of fun to an already festive atmosphere, and will give your brain a workout in the process. Double win.