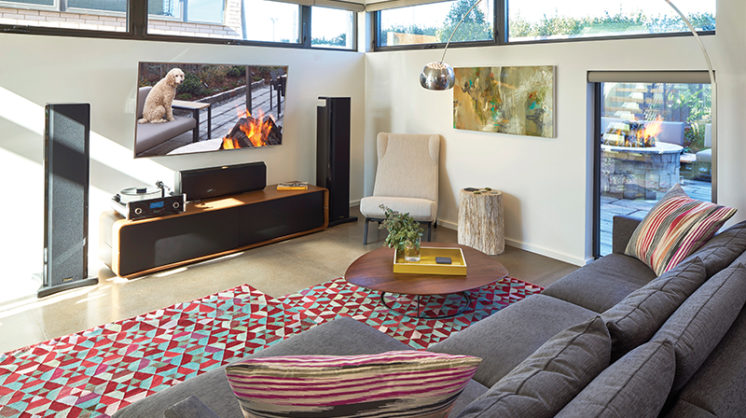 Mike Elder loves his new neighborhood, but he loves his new home even more: a perfectly articulated, modern jewel in the Meadowbrook Acres micro-neighborhood being crafted by OKC developer David Wanzer. The two clusters of modern homes, much like those located in Oklahoma City’s SOSA or Cottage districts, are sure to propagate … at least if Wanzer has anything to say about it. He’s a grand proponent of sustainability and creating community, and the homes he’s building are a testament to his philosophy.

For Meadowbrook Acres newbie Elder, it’s the antithesis of his previous home, and it’s the embodiment of where he is at this moment of his life. Peaceful. Also slightly hyper. Searching for calm, and stripping away that which no longer serves him. Mostly that meant lots of stuff and a great big Country French-style home on a huge lot with a pool to the north of the metro area.

“I was way out there in the country, I’m not married, my kids are grown, and my soul was floating around in a 5,000-square-foot home. I’m 61 now. I wanted a smaller home that I could button up and travel more,” Elder explains. “This home makes me feel relaxed. It’s a 180 from how I felt at the other home, especially in how well I sleep.”

Elder describes himself as very “sciencey” but not very artsy. He has a strong sense of design and knows what he likes but relies on a small tribe of tastemakers to guide him on his interior design vision quest. That group includes his sister Cindy and the designers at the nearby Classen Curve shop BD Home, which has been instrumental in creating the home’s interiorscape. 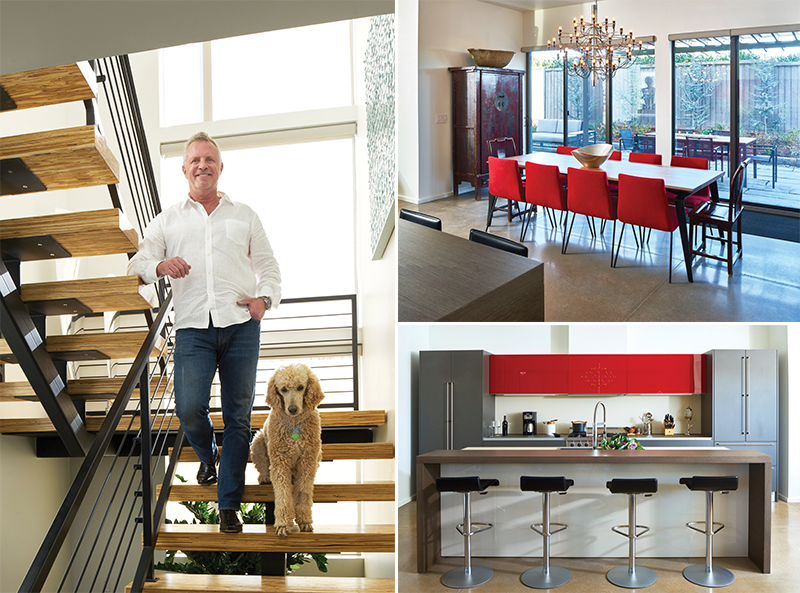 •Mike and his buddy Vegas enjoying the flood of natural light that fills their high-tech, high-style, high-efficiency home.

•Elder’s sleek dining room is a perfect balance of warmth and high style. An antique, Asian-inspired armoire pairs beautifully with a spectacular, willowy chandelier and lacquer-red chairs by Pierre Paulin for Ligne Roset, a French company in business since 1860. The dining table is the Odessa, and features legs angled like airplane wings.

•The kitchen was designed by Scott Pohlenz, AIA, NCARB, of Pohlenz Cucine Moderne in Tulsa. The Valcucine frosted glass countertops and backsplash and Smeg range and oven are from Italy, the Liebherr refrigerator and Bosch dishwasher are German and the Broan vent hood is American. Ligne Roset’s “Pam” barstools anchor the island.

In further pursuit of alternative thinking, Elder attended the Burning Man Festival in 2015. “It was transformative. Of course, my version of Burning Man was very relaxed. I did the 60-year-old’s version.” Just when you think he’s gone ’round the bend, his sense of humor kicks in. “I had to wonder, though, about the carbon footprint of the Burning Man when he was getting burned.”

Elder is an Oklahoma City native and an Eagle Scout. He’s an anesthesiologist and owner of the cosmetic procedure center Advanced Aesthetics. A full-throttle career to be sure, but here, too, Elder is interested in simplifying. “My goal is to reel it in a little and relax,” he says. 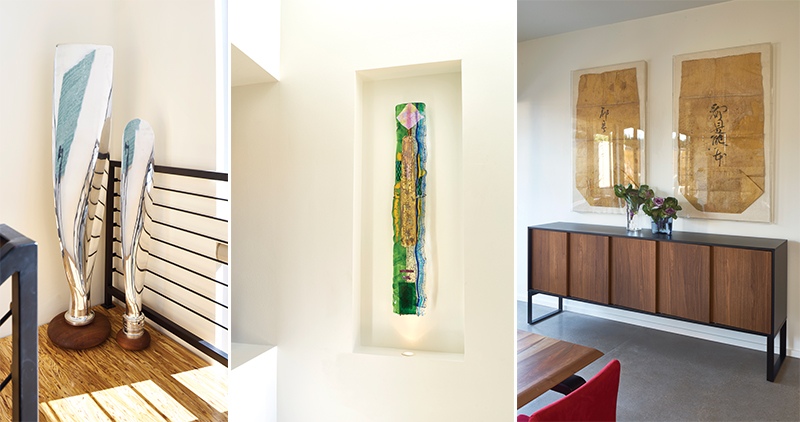 • Silver sculptures on the staircase are artfully reimagined propellers. They’re simple and streamlined, much like Elder’s new home itself. “When I moved in here, I really decided to own fewer things,” Elder says. “It took months to clean out the attic of my other house. I found things I didn’t even know were there!”

• Kiln-formed glass art by Oklahoma City artist Suzanne Wallace Mears illuminates the entryway. Says Mears about the piece, “The theme is tribal, a favorite theme of mine. The totem is a guardian of the home. To protect. Glass is a magical medium to work with.”

• Elder’s love of his family is a constant in his life. Rice bags, beautifully framed, inhabit the dining room wall above a console containing his grandfather’s treasury of genealogy books, some of which are 150 years old. He also still grows his grandmother’s carefully repotted strawberry plants, which still produce berries. She’s been gone 13 years, but her grandson still shares this activity with her.

An avid skier and hiker, Elder spends at least two weekends a month at his mountain retreat in Colorado. He’s recently discovered yoga, and receives private instruction upstairs in a room he’s dedicated to the practice. His favorite pose? Savasana, otherwise known as “corpse pose,” the meditative, restorative, restful pose at the end of each class that allows the body to integrate everything it’s just done. Throughout the home are nods to Eastern spirituality, some overt and some more subtle.

Sharing Elder’s gem of a home is Vegas, the standard poodle, who loves nothing more than spending a day at doggy daycare, then snoozing on the couch all evening, occasionally lifting his head to see if anyone’s eating anything they might be willing to share. It’s a happy life in Meadowbrook Acres for Vegas, and for his human, too. 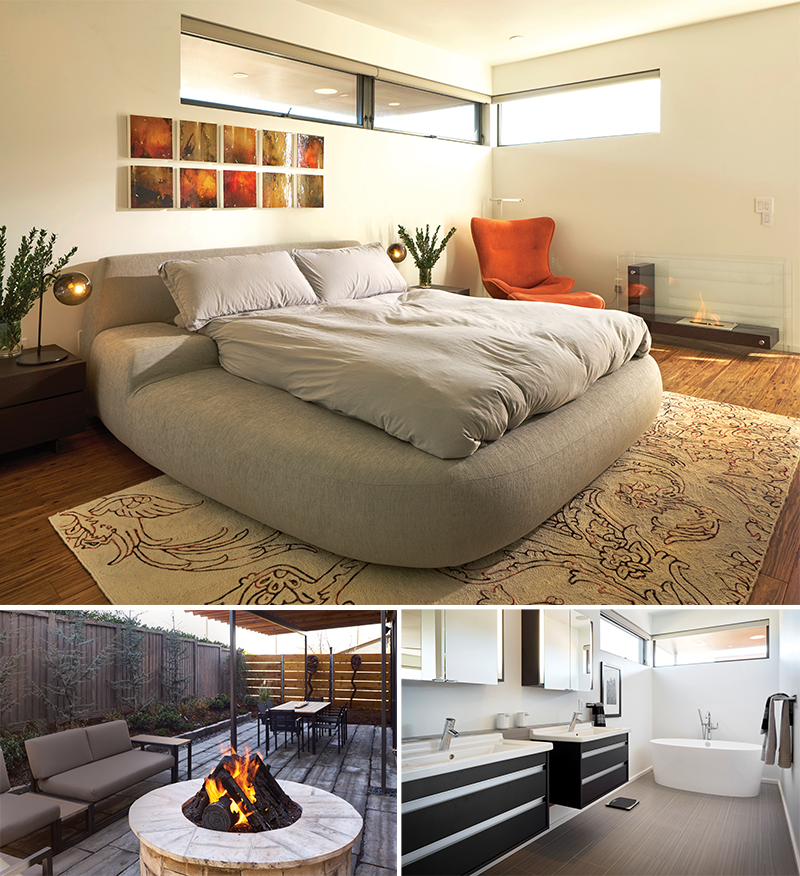 • This bed is one of only two like it in the United States. It’s an extra-long, European mattress to accommodate Elder’s height. The platform is a uniquely organic shape, further softened with a fabric covering. Warm neutrals and a glass-encased freestanding fireplace are modern yet welcoming.

• The master bath is a tranquil escape from the rest of the world with its enormous soaking tub and soft flood of natural light. Banish the scale and its perfection would be complete.

• “Humans need a little fire,” says Elder. His outdoor space contains plenty of seating, plus a fire pit with sculptural logs and more than 500 bulbs to fill the space with a riot of color each spring, installed as part of an exterior landscape design by Heather Popowsky of Neighborhood Gardener.