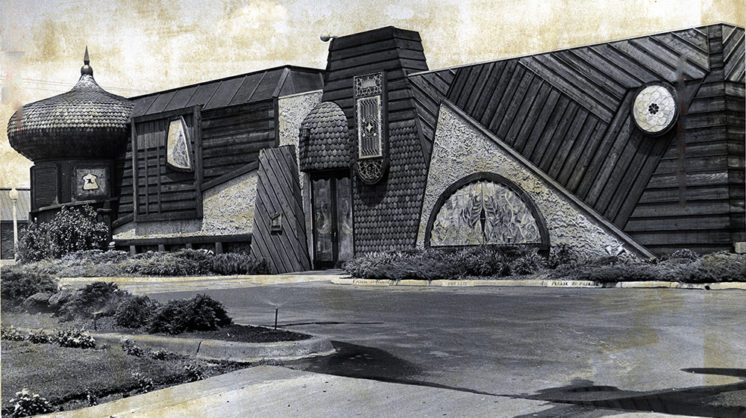 Back in 1976, a new restaurant opened in Oklahoma City that flaunted extremely bad taste, and employed a waitstaff that bordered on rudeness. But it was all part of the charm of Molly Murphy’s House of Fine Repute.

Diners had never really seen anything quite like the restaurant opened by owners Bob and Jeffiee Tayar at 1100 S Meridian in Oklahoma City. A toilet overflowing with flowers greeted guests at the front door, and upside-down flower pots hung from the ceiling. But the pièce de résistance was a cherry-red 1963 Jaguar used as a salad bar.

“We always had such a fun time when we went there,” says OKC resident Carrie Summers-Kaul. “It was completely over-the-top, and I’ve never seen another restaurant quite like it. I remember the sports car salad bar, and for dinner we usually ordered the Bacchus Feast. It was a whole chicken cut in half, and also had beef kabobs and lots of vegetables served family-style. The servers would bring out bibs and put them on us.”

The food was only a part of the whole Molly Murphy’s experience. The waitstaff donned elaborate costumes, and their language and demeanor pushed the boundaries of what was socially acceptable in the late 1970s and ’80s.

“I made the mistake once of asking our server where the restroom was located,” Summers-Kaul remembers. “Immediately, he began yelling, ‘Hey everyone! Carrie needs to go to the bathroom. Does anyone else need to go?’ I was so embarrassed. Then a few girls from my class went with me. When we got back, the server stood up and said ‘Carrie, Carol and Michelle made it to the restroom all by themselves! Let’s give them a round of applause!’ It was all good-natured fun, and something I still remember nearly 40 years later.”

The crowds began dwindling by the mid-1990s, and the end came when a local TV station showed up on-site to investigate the use of restaurant coupons. A fight broke out, lawsuits followed and Molly Murphy’s closed abruptly in 1996. But for a generation of Oklahomans, the memories remain.

“I can still see the waitstaff in their costumes, and remember thinking what a fun place that must have been to work,” Summers-Kaul says. “I told my girls about it, and that they missed out on a really fun restaurant. Time passes so quickly, and while places like Molly Murphy’s aren’t around anymore, at least we have all those good memories. Those were fun times.”