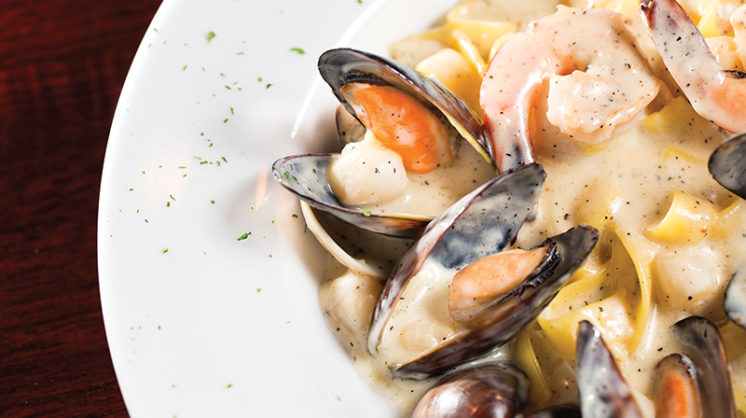 If your high school was anything like mine, the foreign language options were French and Spanish, the end. College was a little more varied – I managed to learn a bit of Latin and German, at least for a while – but when it comes to the Italian tongue, I’m basically Kevin Kline from A Fish Called Wanda, unable to do anything but smile and overpronounce the names of food items. Fortunately, I’m living proof that you don’t have to speak Italian to love the food, and Rachel Foster of Moni’s Pasta and Pizza in Edmond is proof that you don’t have to be from Italy in order to dazzle with its cuisine.

Chef Rachel – who’s from Minneapolis – brings over a decade of experience, including training at Le Cordon Bleu in L.A. to the kitchen, and her husband John is a natural for the front of the house. “She runs everything from day to day, I manage and do the business stuff,” he says with a laugh. Together they’ve brought a fresh energy to the restaurant they purchased from the original Moni in 2014, filling the small space (which is either in Edmond or OKC, depending on whom you ask) with a welcoming vibe and food that approaches the sublime.

Take the Risotto di Rachel – it’s a signature dish, “so I can change it the way I want,” laughs the chef. Its current iteration features spinach and walnuts as a landing bed for a nicely grilled salmon filet, and it’s hard to imagine much in the way of improvement. Or the chicken rollatini, a breaded chicken breast pounded flat and wrapped around a blend of mozzarella, parmesan and basil, served with a mushroom-laced pink sauce (marinara with a dab of Alfredo) on spaghetti. Speaking of sauces, John says the marinara takes about six hours to make, and the Alfredo is outstandingly rich and creamy without being thick; a choice accompaniment to the seafood fettuccine’s shrimp and mussels.

The palpable (and palatable) improvement in flavor that comes with making so much of the menu in-house and to order also carries the side benefit of extra flexibility. The pasta can be gluten-free if you wish, and many ingredients can be substituted or removed – like a lighter shrimp scampi served on a bed of spinach rather than spaghetti. Its unusual orange hue is the result of a little paprika in the sauce. 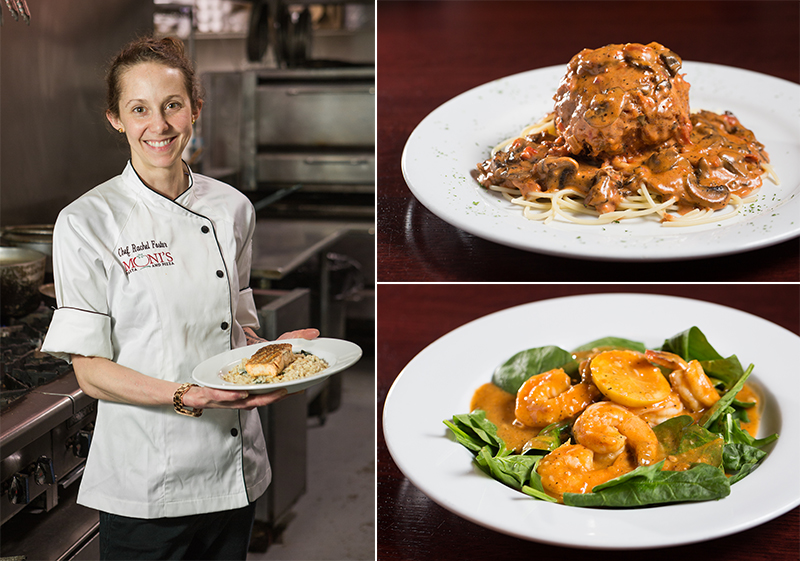 Even the free bread is great: flaky, with a salty crust on top, and the accompanying oil-and-cheese-and-garlic “Italian butter” elevates it to the realm of delectable treat. “I’ve been known to make a meal of it from time to time,” John says. If nutrition weren’t a factor, you could do worse than a basket of bread capped off with a fresh cannoli or slice of tiramisu or limoncello cake. Calories, schmalories.

“We kind of give an upper-scale experience for a lower price,” John says in reference to the restaurant’s consistently positive customer feedback. “My favorite thing I’ve heard someone say is that it feels like they’re in their friends’ living room eating.”

The key to understanding the extra quality in the Moni’s experience might be best summed up by John’s anecdote about one of the menu’s humbler-sounding dishes: the mozzarella sticks. “We used to serve frozen, but it killed Rachel whenever we did, so she spent three months tinkering with a recipe using the house bread.” Yes, the fabulously tasty rolls I mentioned above – when a tray gets made but part of it isn’t served, the remainder becomes the breading for their house-made appetizers. “It takes way longer [now], but it’s worth it,” John says.

“Every time we get something like the mozzarella sticks right, it leaves something else on the low end of the totem pole that we then want to try to improve.” Simplistic as it may sound, it’s that constant desire to better their menu that results in a continuously better menu. If you love to eat Italian, Moni’s is an excellent choice … whether or not you say “mangiare.”

The Moni’s mission of giving a quality experience for less diner investment is going well – in fact, they’re about to outstrip their current space. At the end of this year, the Fosters are planning to expand next door, which means they’ll be able to do something a little special with the exterior space between: a courtyard area with an atmosphere like a Tuscan boulevard. Should be worth taking a tour.