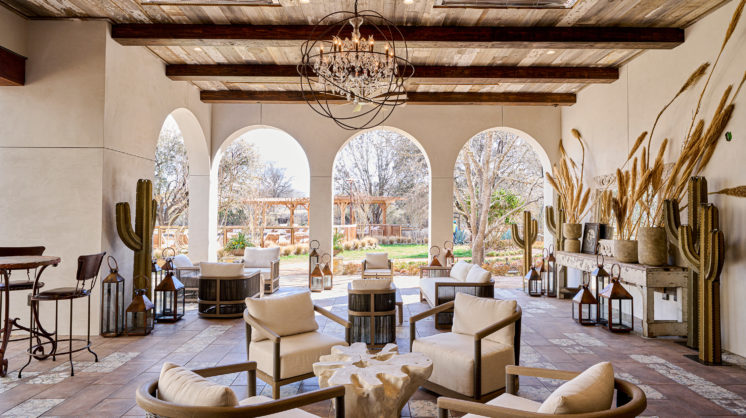 Located in the Fort Worth Stockyards alongside Mule Alley, Hotel Drover unabashedly embraces everything “cowboy.” A longhorn cattle drive can be viewed twice daily just two blocks away — but with so much to savor inside the hotel proper, it’s a challenge to walk away. Thoughtful details echo themes of the Wild West, while every guest experience is fully luxurious.

A six-foot “Drover” cowboy statue signals a visual “Howdy” to guests as they enter; the mixed-metal masterpiece by artist John Lopez reminds us that we’re in Cowboy Country now. The large chandelier above — a tangle of intertwined antlers — also sets the scene. Throughout the hotel, Western-themed traditional and modern art punctuates rooms fashioned with reclaimed woods, copper, steel and native Texas stone. A two-story library in the lobby is filled with Texas-inspired books, alongside a floor-to-ceiling hat display. Saddle up in a cowhide chair, kick up your boots by the fireplace and soak in the views.

97 West restaurant is a highlight of the hotel, serving up favorite vittles like fried green tomatoes, chicken fried steak and Texas gulf oysters. Order the “carpetbagger filet,” a melt-in-your-mouth cut of steak topped with fried oysters — or for more adventurous eaters, the antelope is quite popular. The flash-fried Brussels sprouts and indulgent mac and cheese come highly recommended. And don’t forget the pecan pie, which happens to be fantastic at 97 West as well.

The hotel’s craft cocktails are as tasty as the food, and they can be ordered and sipped throughout the property. If the weather is accommodating, head to the Veranda Bar, circle around one of many firepits or dip into the pool and hot tub under the sprawling oak tree. Hotel Drover’s “back yard” parallels Marine Creek, offering mighty fine views, most suitable for this country retreat.