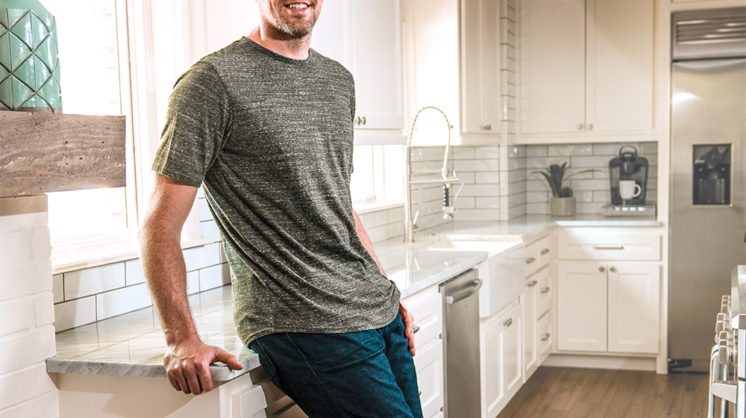 Nick Collison, the longest-tenured member of the OKC Thunder, freely admits he watches perhaps a little more than his fair share of HGTV. “I like ‘Fixer Upper,’ ‘Flip or Flop,’ ‘Property Brothers’ … I also watch ‘Grand Designs’ on Netflix,” he says. The latter is British, often features unique or really challenging design projects and has an extremely loyal audience around the world.

Over the past two years, Collison has collaborated with designer Valerie Helgeson on creating a comfortable, beautiful home that suits his masculine, minimal aesthetic. “In the past, I would view the homes I would rent during the basketball season as temporary,” he says, “but I spend most of the year here, and it became important to me to have a place that is mine. It also gave me a project, and it was something I really got into.”

The home, with its light-filled great room and backyard oasis, is a perfect refuge for Collison, his 11-year-old daughter Emma and their 12-year-old Boston Terrier Morty. It’s also roomy enough for the extended Collison clan to enjoy during their frequent visits to Oklahoma City, and for the holiday gatherings they all enjoy. Collison also keeps a home on Lake Washington in Seattle, where he and Emma spend their summers.

During the intensity of basketball season, Collison is lucky if he gets two or three full days a month to himself, and his home – with its tree-filled lot, sparkling pool, spacious pool house and multiple outdoor living areas – is where he decompresses and relaxes, often grilling meals with fellow teammates. His commute from his front door to the Thunder practice facility is a seven-minute drive. When Emma is in residence, their sweet morning routine is to take a jaunt around the neighborhood, she on her scooter, with her dad and Morty strolling alongside.

Collison began his home search in spring 2015, and focused on historic neighborhoods such as Crown Heights, Mesta Park, Heritage Hills and also Nichols Hills, which is where he ultimately found his home. The 6’11” forward explains, “I wanted a big, open floorplan; small rooms don’t work for me because of my size. I love the historic neighborhoods and the character of older homes, but the floorplans aren’t generally open.” 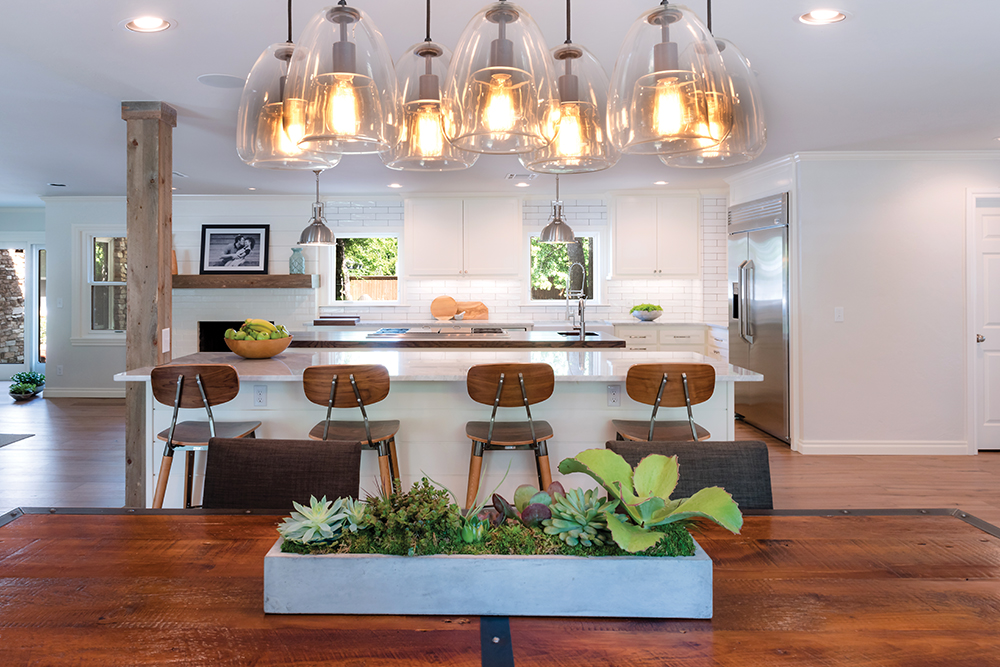 Functional and elegant design in the kitchen and dining room includes plenty of natural materials: Warm woods, dining chairs covered in a subtly patterned walnut-colored fabric and a simple arrangement of succulents co-exist beautifully in the glow of Edison-style industrial light bulbs encased in blown-glass cloches.

This one still required some extensive renovation, but Collison and Helgeson knew it had great potential. The now-beautiful great room was dark and divided by a wall, right down the middle of the space, and the ceiling’s exposed beams were too low for Collison to walk beneath without ducking. Helgeson knew they could take out the wall, remove the beams and create the kind of open space Collison wanted.

The project started in 2015, just as the Thunder season was winding down and Collison was heading back to Seattle for the summer. “Valerie and I kept in touch over Skype and talked sometimes several times a day,” he says. “I used the Houzz app for design ideas, and we looked at furniture on Pinterest. She was great about keeping my vision, but she did talk me out of a few things – which is definitely for the better.”

It was a hands-on project for Collison, whose goals were twofold: to create a living space he enjoyed and to make intelligent design and renovation decisions so that if he decided to sell, the improvements would add value. “I’ve been with the team since day one, and I have had a very stable career, but it’s the nature of this business that things change for people, so making smart decisions is important to me.” 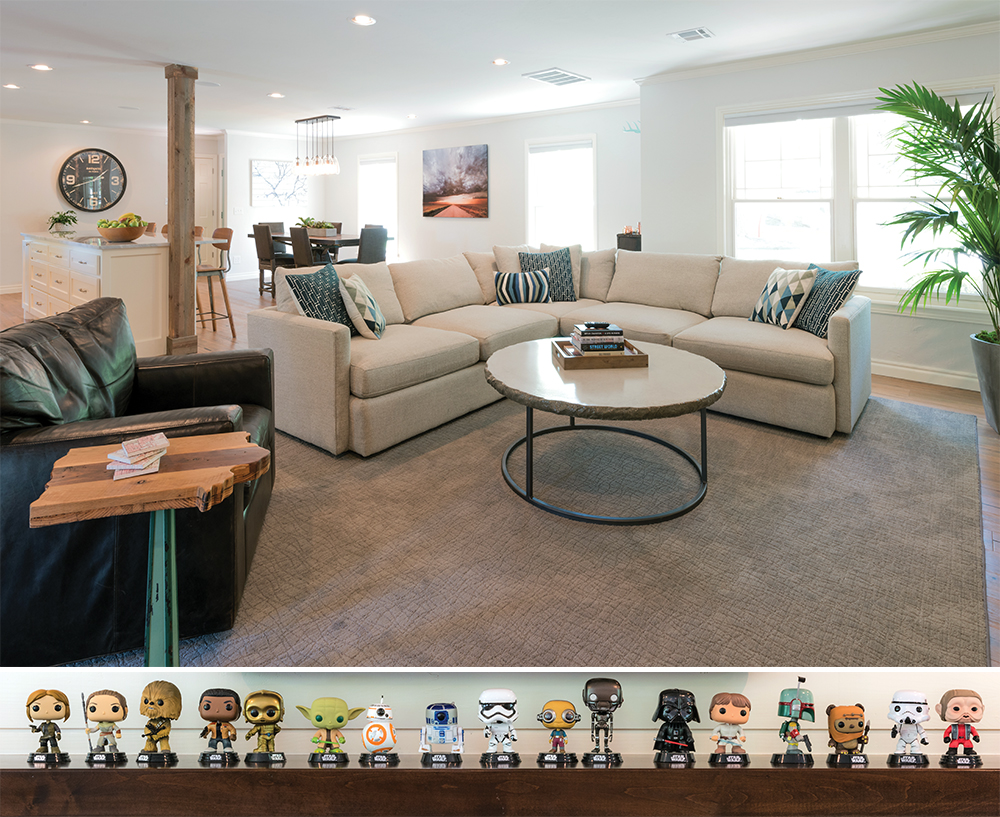 • Knocking out the wall that divided what is now one large, airy space was a big deal. According to Helgeson, the HGTV-savvy Collison was worried about what sort of unexpected challenges contractors might find in the wall, which seems to be a constant plot device on shows like “Flip or Flop.” Luckily, the wall came down without much struggle, and the resulting room manages to strike a balance between being large enough for Collison and fellow teammates to hang out in, and cozy at the same time.

• Thanks to Collison’s Star Wars Funko Pop figure connection, Emma now owns the entire set. They live, logically, in the living room, where they add a bit of whimsy to the space. 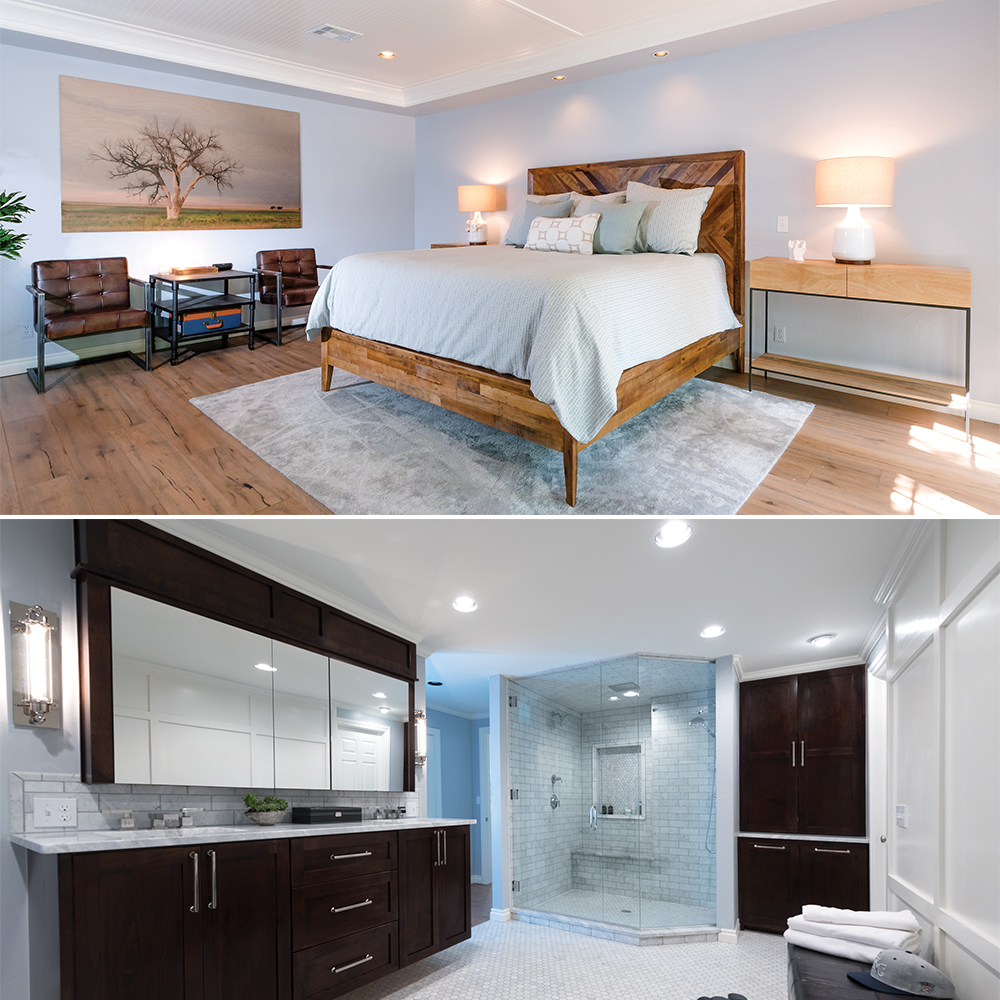 • Collison’s design style is masculine and clean, bordering on minimal. A perfect potted plant here and there, large-scale art pieces and a neutral, natural palette rule in the master bedroom. The dresser was custom built, and is made of reclaimed stockade fence sections.

• Dark wood custom cabinetry and a tailored leather bench anchor a large master suite. Raised to suit Collison’s 6’11” frame, the vanities are constructed so they easily can be lowered, should the home someday become the provenance of mere mortals. Further evidence of Collison’s forward-thinking, businesslike approach to the project: beneath the leather bench is hidden everything needed to install a soaking tub. 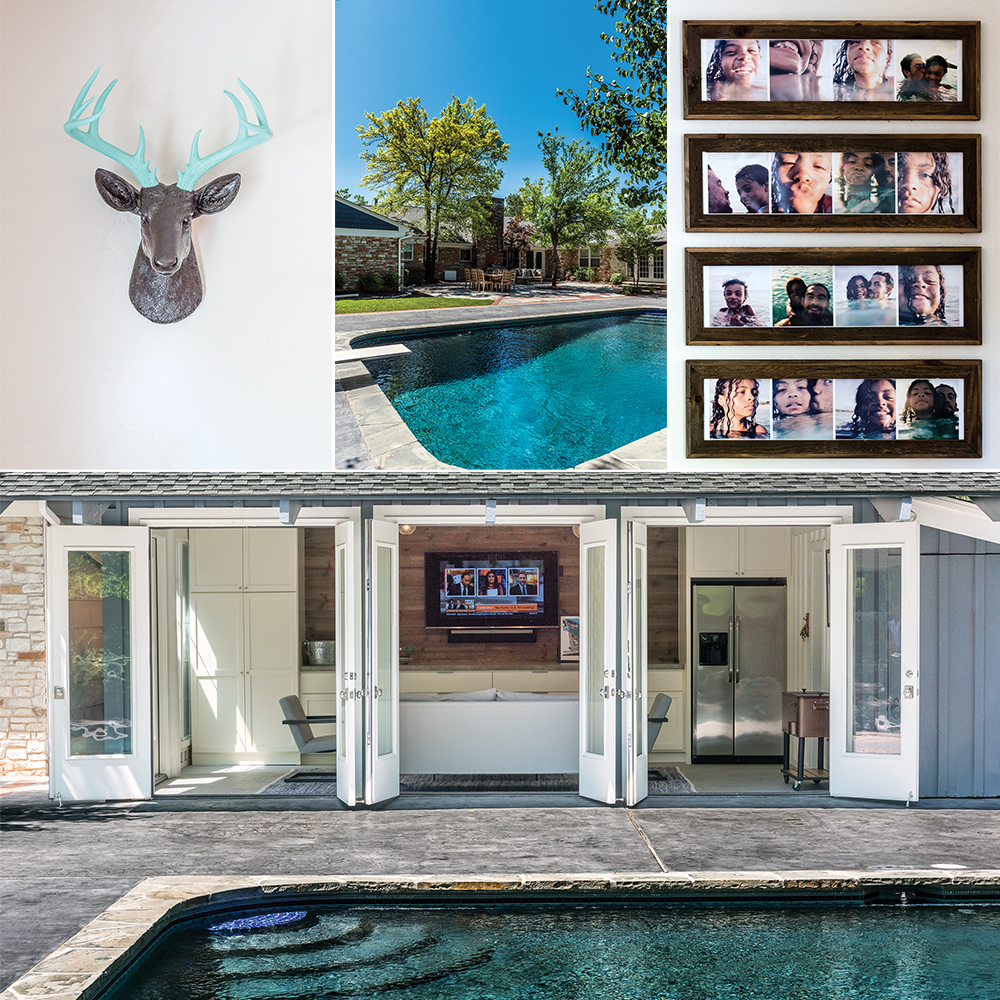 • The home’s spacious outdoor spaces were a huge selling point for Collison, who enjoys the fire pit on cool days and the pool on steamy Oklahoma summer days. Not pictured is Collison’s custom outdoor shower, which he enjoys when weather allows.

• An artful installation of photos of Collison and his daughter Emma is framed in reclaimed wood, and occupies a wall in the great room, adjacent to the master suite.

• When Collison’s extended family is in town for one of their frequent visits, the pool house becomes a kid-friendly hangout for movies and fun, and allows the grownups to enjoy a little respite in the main house. It’s well stocked with refreshments, and its big-screen television and pool-proof upholstery and flooring make it a favorite spot year-round.