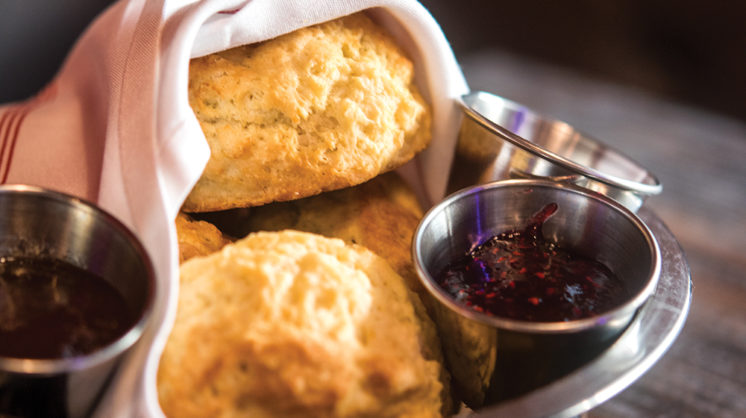 Charleston’s, Pub W, The Garage, Upper Crust, Mama Roja … if you’ve lived in OKC for any length of time, odds are good you’ve eaten at an establishment operated by the Hal Smith Restaurant Group, especially given the number of genres they span, from pizza to outstanding steaks. One of the only areas that’s remained outside their focus has been breakfast … until now. In this darkest month of the year, metro residents have a new reason to rise and shine, thanks to the culinary present that is Neighborhood Jam.

It’s located northwest of Penn and 150th, which is away from the metro’s center but fairly easily accessible to OKCitizens; just take the Hefner Parkway past Memorial and then go east on 150th. Chances are most of the traffic you encounter will be headed toward Jam.

I love the vibe inside – while I was taking notes, my phone autocorrected that to “bike,” which is, oddly enough, also accurate. There’s a lit sign reading FOOD on one wall whose O’s are formed by a bicycle’s tires illuminated with color-changing LEDs. It’s emblematic of their playful, vibrant aesthetic. The interior is big and industrial in form – concrete floors, hangar ceiling, a mosaic of shipping pallets hanging over the bar – but you’re unlikely to notice right away because the yellow wooden chairs, red accents and teal cabinets do good work softening the space. The early sun helps, too: This is a morning-oriented restaurant, so it makes perfect sense to have most of the south and east walls be glass … with glare-reducing screens, of course.

About a dozen stools ring the white marble bar, with easily more than 100 seats at the various booths around the interior, but with plenty of elbow room and space for the staff to circulate. I also really like the design in the long, curving row of booths – like a sine wave with separate tables in each peak and trough, maximizing the number of diners while giving them a feeling of separation from their neighbors, as well as looking cool. 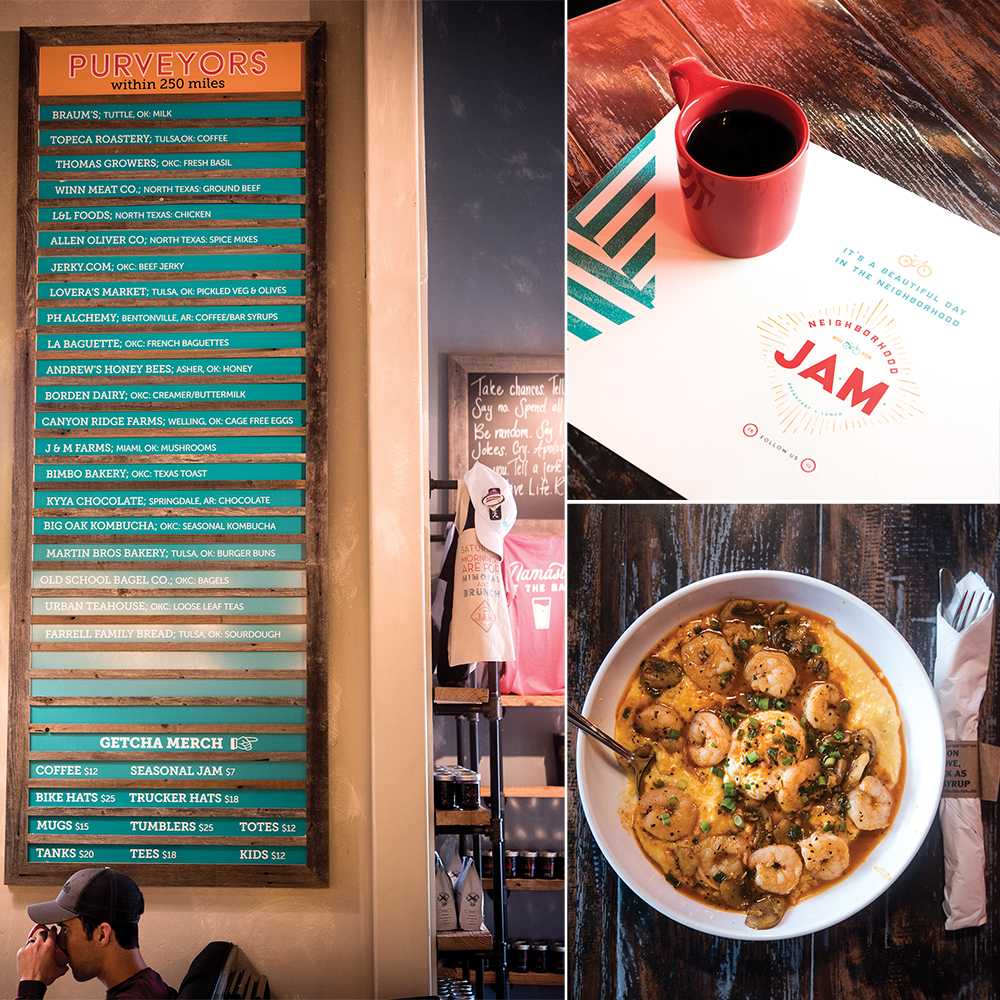 When it comes to the food, variety and quality are the guiding principles: You can get anything from a healthy granola-topped açai bowl to a heap of take-no-prisoners Pineapple Bourbon pancakes; millennial-friendly avocado toast (the balsamic glaze is quite good) to timeless biscuits and gravy and the all-ages mess of hash browns, eggs, bacon and melted cheese called The Heap. I would make an especially strong recommendation for two spicy dishes. The Hot Jam Biscuit features a wonderfully succulent chicken breast that proprietor Michael Kraft said is marinated 48 hours before frying, topped with egg, bacon and cheese and placed in a fresh biscuit slathered in zesty jalapeno peach jam. And if you prefer a fork, the El Jefe is a completely excellent stack of corn tortillas and pulled pork, crowned with poached eggs, pico de gallo, two cheeses and a righteous green chile hollandaise.

I asked Kraft for recommendations, and he rattled off seven or eight dishes starting with the shrimp and grits (which he calls “the greatest thing in the world”), then trailed off and said, “Well, pretty much everything’s good.”

Even the beverage menu is prolific; smoothies, hot teas, juices and more. Try an alcoholic beverage, such as the popular Brunch Punch, or a specialty latte, such as the sarsaparilla-powered Sam Elliott, or combine the two impulses with a Maple Leaf or other coffee cocktail. 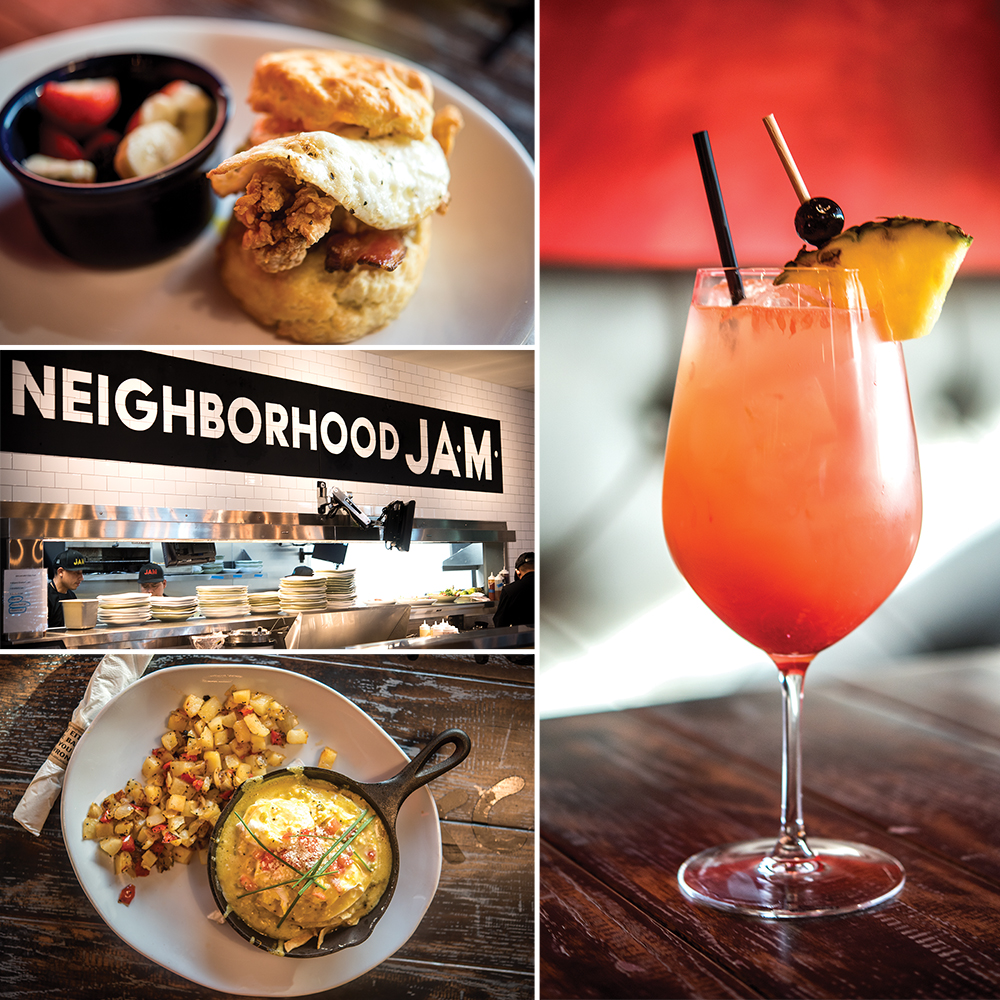 Many of those specialty beverages are enhanced by Pink House Alchemy, a line of small-batch flavored syrups for use in lattes and cocktails. They’re made in Arkansas, and were recommended to Jam by their coffee people at Topeca in Tulsa – it’s part of a huge effort to keep ingredients as local as possible. A board near the entrance proudly displays the results; you’ll see close to two dozen sources within 250 miles for everything from milk (Braum’s) to mushrooms (J&M Farms near Miami).

Kraft has been dreaming of bringing a high-quality breakfast place to OKC since high school – he wanted the metro to have something like the havens devoted to his favorite meal of the day found in other cities (he cited Denver and Asheville, if you’re planning a road trip). It’s taken a lot of work and planning to get this concept off the ground, but so far the response is extremely positive. When we visited on a Tuesday a few weeks after the grand opening, he said, “Yesterday was our shortest day so far, and there was a 45-minute wait.”

So while it might be a little crowded inside, and cold and dark outside, don’t let that keep you from planning a group Jam session. As Kraft muses, “People seem not to mind the wait as much if you give them a reason to wait.” Your hot, fresh, delicious reasons are waiting.