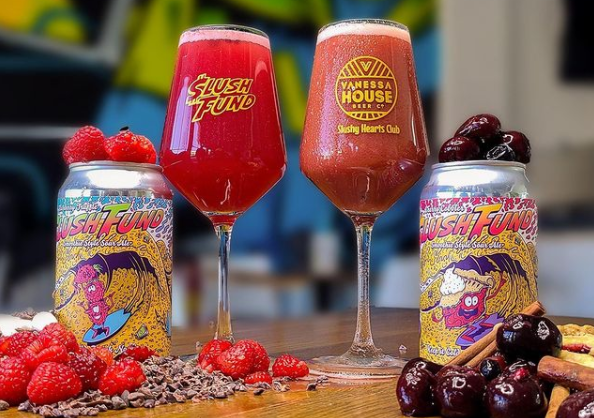 Vanessa House Beer Company is launching its new line of “slushy” beers this week under the Slush Fund name. The first two – Cherry Cobbler and Raspberry Truffle – will be available at the brewery on tap and in six-packs Friday, Feb. 12. The style is a sour base with unfermented fruit added according to the desired flavor profile. The result is a fruit-forward, refreshing beer with enough sour to prevent it from being sweet.

“The cardinal rule of brewing is you don’t send out any product that’s unfermented,” Andrew Carrales, an operating partner, said. “But we also think breaking rules is the point of craft brewing, at least for the purpose of pushing boundaries.”

Unfermented fruit can lead to a secondary fermentation in the can that easily leads to the can “exploding,” or at least the top popping off. The brewers at VHBC have been experimenting with different methods to handle the fermentation issue.

“We’re confident we’ve solved the issue,” Carrales said. “Still, we’re only selling cans here at the brewery for now, because as confident as we are, we’re trying to be appropriately cautious.”

The line will expand to five in March, and then an additional two options will be added in May. Carrales said they plan to keep expanding the line and selling the style “as long as people want to buy the beers.” While the fruit themes make sense for spring and summer, the style also allows for more “wintery” flavors and ingredients.

“I’ve seen a German chocolate cake slush beer,” Carrales said. “It’s just the ingredients that create the desired flavor profile, so really, you can use any combination of flavors you like.”