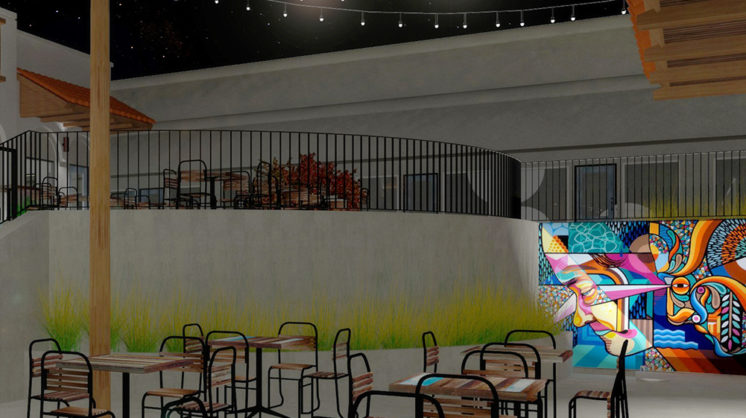 The first new building to open in the Paseo in years offers restaurants, a coffee shop and wine bar, a public courtyard and artistic spaces.

Pueblo at Paseo already has all nine of its spaces accounted for, with businesses such as Scratch Paseo, Craft coffee and wine bar, Herban Gardens, Braid Creative, EB Gallery and Camp Pixel animation and branding set for the new building.

Scratch Kitchen & Cocktails in Norman will be opening a second location at Pueblo called Scratch Paseo – due to open in November – offering cocktails and a sophisticated smaller version of its Norman menu. Herban Gardens on the south end of the building offers consumers non-GMO culinary herbs and produce that are free of herbicides and pesticides; and a breakfast restaurant is also set for the new space at 607 NW 28th and Dewey, west of the Paseo. More details to be announced.

All three restaurants will open onto a two-level courtyard with ample public seating.

The developer behind Pueblo is Jeremy Foraker, who has worked in retail development both in and out of state for more than 15 years. While developing the land he bought several years ago for the Pueblo project, he also worked on the early stages of the Frida restaurant. That design was given the green light by planners earlier this month, and will be built on an empty lot east of the Pueblo.

Foraker has a passion for the Paseo Arts District, which he describes as a “unique place, worth investing in and developing.” Foraker saw there was a demand for space in the area but wanted to stay true to its style – which is ideal for strolling and exploring small businesses and restaurants.

“I developed street parking for Pueblo so I could use the center space of the development as a public courtyard and not for parking; I wanted to leave the courtyard open for tenants.”

He said his vision was to offer studio spaces and drive traffic through food and beverages – and despite a setback in the design, which involved a 10-foot drop, most of those studio spaces are already open for business, such as Braid Creative and EB Gallery (Eric Bloemers Photography.)

The remaining businesses are not far behind, and the new design is already open to the public and ready to explore.