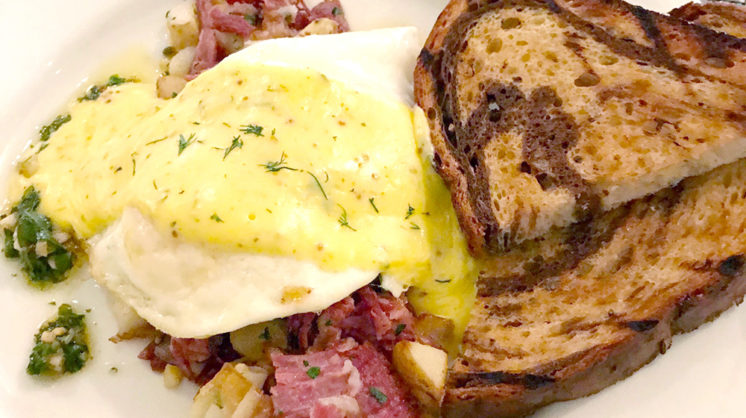 The Skirvin Hotel is one of our city’s most beautiful landmarks, and while its popularity as a brand and source of community pride has long been established, there has been one major problem in recent years.

“The restaurant had slipped,” Luke Fry says about the in-house Park Avenue Grill. Fry, who manages all food service in the Skirvin except banquets and catering, is partnering with executive chef Aaron Miles to revamp Park Avenue Grill’s menus and ambience.

“The Skirvin is a great brand in Oklahoma City, and the restaurant needed to rise to the level of the rest of the brand,” Fry continues.

A food service veteran, Fry has worked as a chef for A Good Egg Dining Group (Red PrimeSteak) and front-of-house manager for Ludivine, so he brings knowledge and experience of both sides of restaurant operation to the task. Three of the new menus rolled out on Saturday, October 14, and a new brunch menu will debut in the near future.

“We wanted to get all the processes down on the new menus before putting together a new brunch menu,” says Miles. “For now, Sunday brunch will have a combination of breakfast and lunch items.”

Minor changes to decor will continue for the next couple of months, but the major one has already been accomplished: moving the breakfast buffet line to the back of the restaurant. Hilton’s corporate office – the Skirvin is a Hilton property – requires that all full-service hotels in their line have a breakfast buffet, but having it in the center of the restaurant communicates more than just the availability of a buffet; it downplays the actual menu.

The major change to the Park Avenue Grill is going to be its dinner, but breakfast is typically a hotel’s busiest meal service, so Fry and Miles have put together a stellar menu. Miles, who is from Milwaukee, brings a different take on food than Oklahomans are used to, but if his corned beef hash with dill mustard Hollandaise is any indication of his skills, we are lucky to have him.

“I got to Oklahoma last year, and I wanted some corned beef hash for breakfast,” Miles explains. “I woke up, went to the kitchen in the hotel, and discovered they pureed the mix and then formed it into a loaf. ‘That’s not corned beef hash,’ I said.”

Miles is serious about cooking, and not just his native favorites. The biscuits and gravy are some of the best in Oklahoma City: fluffy biscuits baked in-house, béchamel gravy with a light touch on the seasoning, and a little bit of sausage. If there is a dish by which Okie cooking should be judged, it’s biscuits and gravy, and our new Yankee chef passed the test easily.

“For dinner service, we want to emphasize the name of the restaurant,” Fry says, “so this is the most dramatic change. We’re focusing on making it a new American grill; it’s supposed to feature the grill.”

To make that happen, Fry and Miles revamped 75 percent of the dinner menu, including the addition of fresh seafood, a dry-aged in-house rib eye and prime rib on Friday and Saturday nights, as well as rack of lamb. Nearly everything is made in-house, including many of the condiments, and vegetarians will also find more than salad choices on the menus.