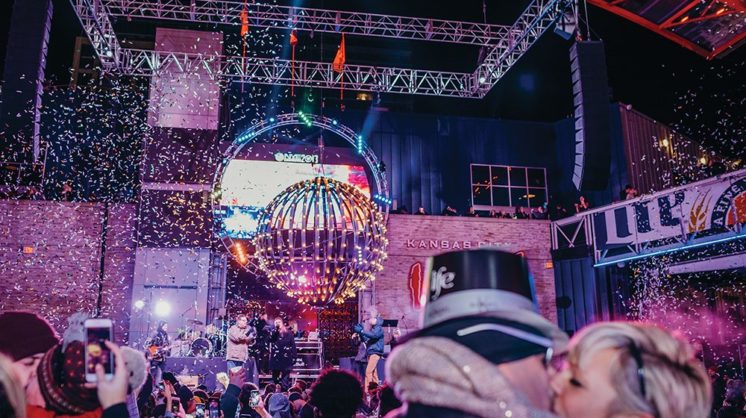 Throughout Oklahoma City, there is no shortage of things to do on New Year’s Eve – including bidding farewell to 2018 among thousands of friends at Opening Night (see page 78). But if the holidays and work life have been overwhelming and you need to escape the 405 for a couple of days, here are a couple of getaways to make New Year’s Eve a memorable one.

Just five hours north of OKC, you can spend your New Year’s Eve exploring Kansas City’s magically lit Country Club Plaza. Although many of the city’s famed fountains will likely be shut off due to cold weather, there is no shortage of beauty in this up-and-coming metropolis that houses the Kemper Museum of Contemporary Art, the Nelson-Atkins Museum and the Nerman Museum of Contemporary Art. Kansas City certainly has a Parisian feel to it, and for the best French food you could ever ask for, head to Prairie Village and dine at Café Provence. Plus, there’s always KC barbeque at Joe’s or Arthur Bryant’s. Stay at the sophisticated, design-forward Fontaine Hotel, located in Country Club Plaza, and get a pass to NYE Live in the Power and Light District. Tickets grant access to 12 bars and night clubs that offer everything from highfaluting champagne toasts and themed parties to wild confetti cannons. 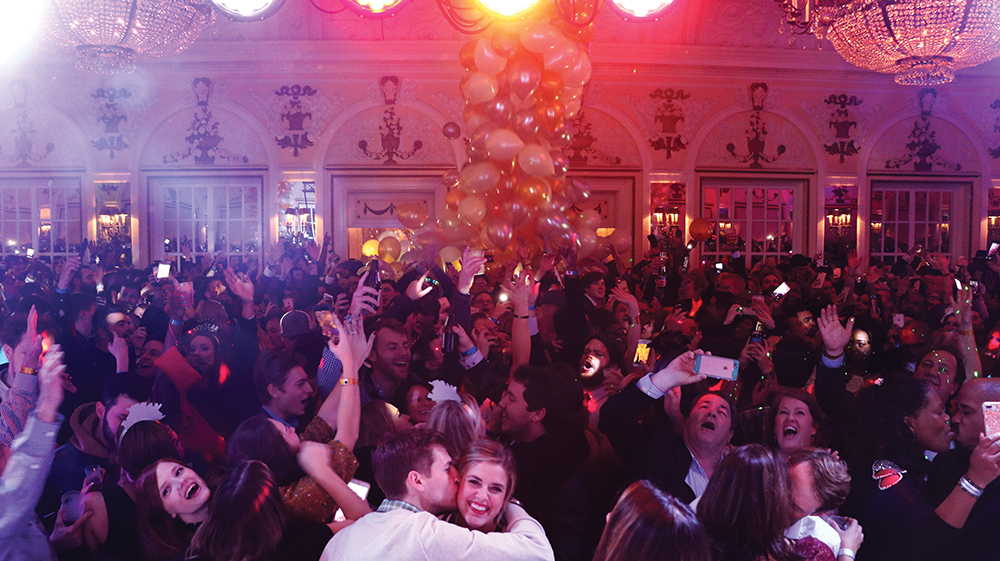 Memphis is one of the country’s hottest destinations any time of year, with its wicked blues scene alongside its signature barbecue style – but at New Year’s, this Tennessee city takes celebration to the next level. Grab some southern food at Rizzo’s and then stop by Old Dominick’s Distillery to try some craft whiskey. Enjoy it, but pace yourself; while their craft whiskeys are hard to put down, it’s gonna be a long night. There’s no place better to ring in the New Year than at the “South’s Grand Hotel,” better known as the Peabody. This elegant hotel goes from historic to histrionic in one of the city’s largest celebrations. This year, The Garry Goin Group and Seeing Red will get the crowd dancing, and DJ Epic will spin between sets. For those looking for something a little more laid back, The Renee Koopman Trio will be performing classics and standards in the Corner Bar. Plus, the Peabody hosts not one but two balloon drops.

A Range of Celebrations

Look out below! Things are dropping like flies, as cities across America see all sorts of things going down – or up – to herald the New Year. Here are some of the most unusual:

The Mount Olive Pickle Company in Mt. Olive, North Carolina, lowers a 3-foot glowing gherkin into a perfectly preserved redwood pickle tank at precisely 7 p.m. EST. That’s midnight Greenwich Time – as official as you can get – and everyone gets to go to bed early!

Bethlehem, Pennsylvania, lowers a giant Peep (the candy made by local/family-owned Just Born, Inc) beginning at 5:15 p.m. – as far as I know, not midnight anywhere.

Raleigh, North Carolina, is known as the “City of Oaks,” so its NYE symbol is a 10-foot, 1,250-pound copper and steel acorn.

Boise, Idaho, uses a spectacular 1,000-pound spud known as the “glowtato” as its obvious choice. It rises at 6 p.m., simultaneously raising money for local charities, and looms 300 feet above the celebrants waiting for its 60-second descent at midnight.

In Oklahoma, Bartlesville takes advantage of the iconic Price Tower by dropping a 4-foot olive from the top into a large martini glass on one of the balconies. 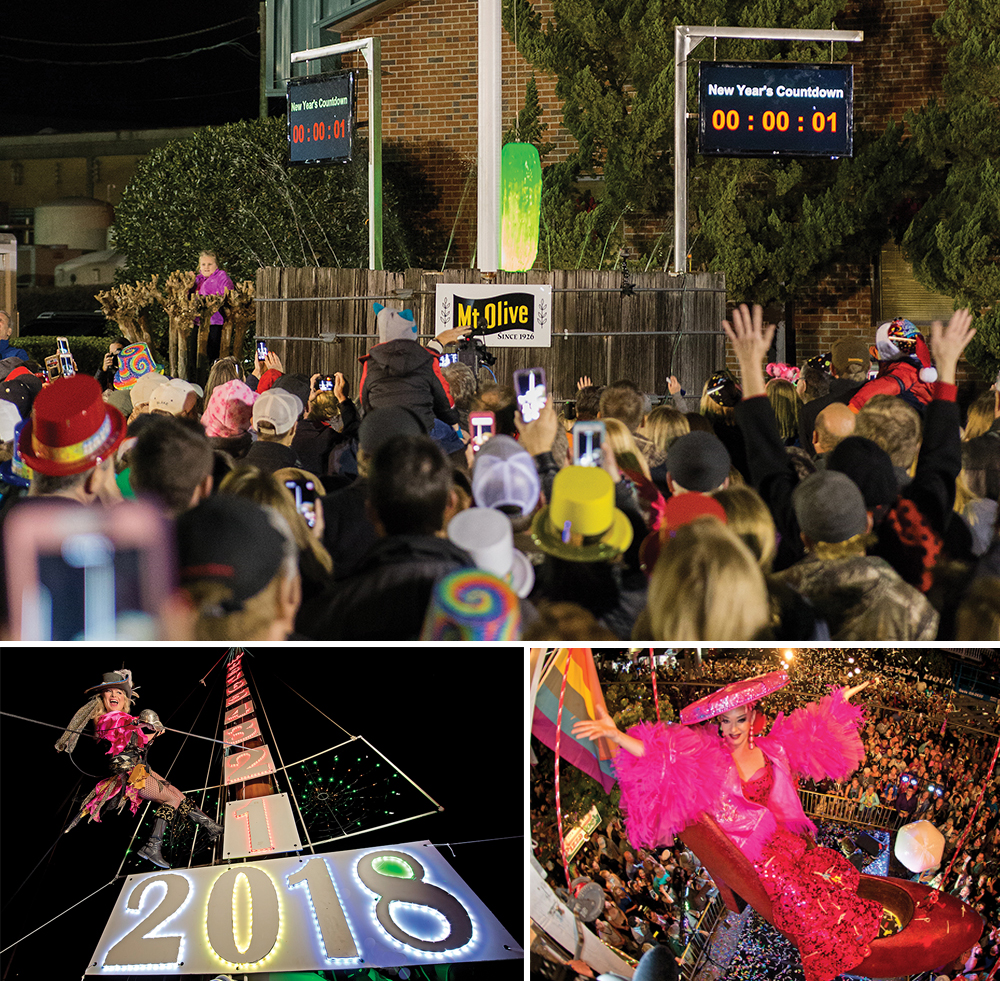 How did this practice get started? The first official time ball was installed atop England’s Royal Observatory in Greenwich in 1833. Every day at 1 p.m., the ball would drop, allowing ship’s captains in port to set their chronometers.

As to the custom of New Year’s Eve observances, New York City was the first to use a time ball. In 1907, a 5-foot (diameter), 700-pound iron and wood ball with one hundred 25-watt light bulbs was lowered from the flagpole atop One Times Square. Although the ball has received a number of upgrades, the drop has only been canceled twice in the century-plus tradition. Today, millions of people around the world watch the glittering Waterford crystal sphere as part of their celebrations.

And many places have created their own traditions. Towns around the country drop everything from mushrooms to Moon Pies, pinecones to possums. Perhaps the winner in the celebration sweepstakes is Key West, Florida, which hosts several drops at different locations on the island: a large conch shell at Sloppy Joe’s Bar, a pirate wench descending from a ship’s mast at Schooner Wharf and a giant lime wedge dropping into a margarita glass at Ocean Key House. But the crown jewel is the descent of a sofa-sized red satin shoe from the balcony of the Bourbon Street Pub Complex. After all, nothing says celebration like feather boas and red satin slippers.