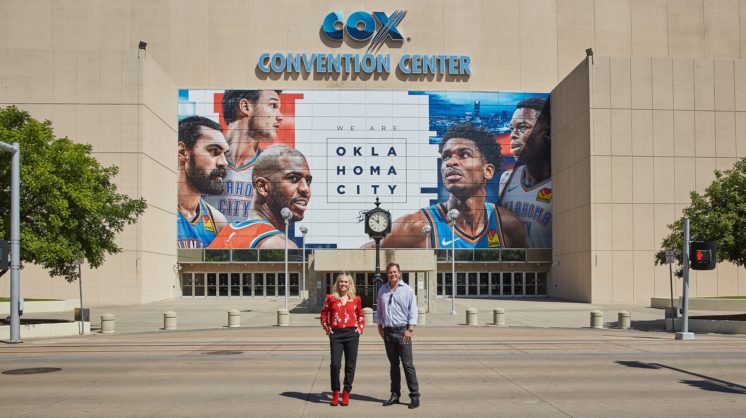 Nearly two decades after graduating from University of Oklahoma, moving to Los Angeles and going on to appear in series such as Fresh Off the Boat, Two and a Half Men and Mad Men,  actress-producer Rachel Cannon, saw a seismic shift in locations for movies and television. In a relatively short period of time, much of the film industry decentralized from California, finding fertile ground in places far away from the Hollywood backlots.

“I was kind of at a place where I was finishing up Fresh Off the Boat, all of the jobs that were coming across my desk were not Los Angeles anymore,” said Cannon, who started Prairie Surf Media with her friend from OU’s Film Video Studies program, Matt Payne. “So, for the first time, in 20 years, everything that was coming across as an opportunity for me was in Atlanta, or New Mexico, or Vancouver, or Australia, or New York. And it kind of just planted a seed for me that maybe there’s an opportunity for me to go back home and raise my kids closer to family and in the place that I loved growing up.”

Cannon and Payne are heading up Prairie Surf Studios, which is converting the Cox Convention Center into production facilities in downtown Oklahoma City. This will include 140,000 square feet of clearspan (space without barriers or pillars) sound stages, ranging from 25,000 to 32,000 square feet. The sheer scale of Prairie Surf Studios will make it the largest ClearSpan film facility in the Midwest.

With a goal of opening Jan. 1, 2021, Prairie Surf Studios has already booked projects for the first quarter. Cannon said their projections for the facility’s first few years are strong due to widespread demand for soundstages once the coronavirus pandemic is under control.

“It’s going to be like the Wild West when the ban lifts and everybody’s able to go back to work … It is going to be people scrambling for stages and trying to get there,” she said. “So, when our news came out at the end of September about the Cox Center, our phones exploded. We didn’t call anybody – it was all incoming calls from production people or people that we knew in the industry asking, ‘Can we see your marketing deck? Like, what are the phases available? When can we get in there, we have 10 shows that we’re trying to shoot.’”

Prairie Surf Studios could spur a significant influx of new film projects for Oklahoma, which is part of a homegrown film and television industry that has seen major growth in recent years. As of November 2020, nearly 20 film and television productions shot in Oklahoma during the last half of the year are in post-production and five are currently filming, including Unbreakable Boy, which is currently using a Bricktown location as its home base and is adapted from the nonfiction book about a special-needs child. And there is more coming, including Martin Scorsese’s adaptation of David Grann’s Killers of the Flower Moon: The Osage Murders and the Birth of the FBI, which will film in northeast Oklahoma in 2021 with Scorsese all-stars Robert De Niro and Leonardo DiCaprio attached.

Jeanette Stanton, deputy director of the Oklahoma Film + Music Office, said that film productions are being attracted to Oklahoma by the state’s Film Enhancement Rebate Program, which currently offers 35 to 37 percent rebates on film and television expenditures incurred within the state. This far exceeds New Mexico’s current 25 percent rebate and is competitive with Louisiana’s 40 percent offer. But dollars are only part of the story. The numbers of on-the-ground film workers, or crew, are multiplying and will only increase with the opening of Oklahoma Film & TV Academy in Spencer, which started offering classes earlier this year.

“We hear great things about crew,” Stanton said, referring to Oklahoma’s sound engineers, camera operators, boom operators and gaffers, all professions that have increased in large numbers over the past 20 years. “We always hear that people are so happy with the crew, and then locations, of course, are way up on the list, because we have 12 ecoregions. The diversity that you can find here is just really unreal. If you want a desert, we got it. If you want a 1920s setting, we have it, and then obviously like modern cities, you can find those as well. I think Oklahoma generally has done a great job of preserving some older architecture and obviously adding new, so those are the top things that we hear and then, of course, incentives just sort of sweeten the deal.”

Stanton said the state is working with a Burbank, California, company called Entertainment Partners that helps direct productions to the state based on all of those qualities.

“They provide a kind of a one-stop shop for the back office work of making films,” she said. “And so they’re always touting Oklahoma, you know, ‘Have you checked it out yet?’”

For film and television production, sound stages are a key factor in offering flexibility for shooting large-budget, long-term projects, allowing interior scenes to be shot near exterior locations. As an example, the CBS series Dallas used two north Texas mansions for exterior shots, Cloyce Box Ranch in Frisco and Duncan Acres in Parker, which was later renamed Southfork Ranch in honor of the series. However, interior shots for most of the series were shot on sound stage in Culver City, California. So, the opening of sound stages in Oklahoma offers a sizable advantage for filmmakers, who will have greater flexibility in how they shoot, and for the state, which can retain more of the dollars spent on production.

Oklahoma City Mayor David Holt has watched the evolution of the state’s facilities since he was chief of staff for former mayor Mick Cornett. During Cornett’s second term, Holt helped the crew for the 2007-2010 TNT series Saving Grace acquaint themselves with the show’s Oklahoma City setting. However, production requirements kept actual shooting in Oklahoma City to a bare minimum. As a result, series stars Holly Hunter and Laura San Giacomo could be seen in episodes talking and eating from Johnnie’s Charcoal Broiler bags with the Los Angeles-adjacent San Gabriel Mountains in the background.

A decade after Saving Grace shut down production, it is entirely conceivable that the series, which was created by Oklahoma-born writer and producer Nancy Miller, could have avoided requiring such suspension of disbelief by filming on Oklahoma City sound stages like Prairie Surf and Green Pastures studios.

“We never got to shoot anything with that accuracy, because they just said it was too expensive,” Holt said. “But this was before the state film credit which would have helped with those costs, and now we are able to present to them these ready-made facilities and soundstages.”

One of Holt’s goals is to have Oklahoma City rival strong industry hubs like Atlanta, Georgia, which is not only the production location for the longtime A&E series The Walking Dead,  but also hosts the FX animated series Archer, which requires only production facilities, not locations.

“I’d say it’s an industry that’s ripe for growth and ripe for encouragement in our community,” Holt said. “This Cox Center facility has sort of fallen into our laps in a way, because we didn’t even build it obviously to be a film production facility and we didn’t build a new convention center so that we could have a film production facility in our old convention center. I mean, all of these things are happy coincidences. But once you have the right people around the table envisioning what this could be, It all makes sense and it has presented a great way to pursue growth in this particular industry. It’s really just a kind of an easy win for us.”