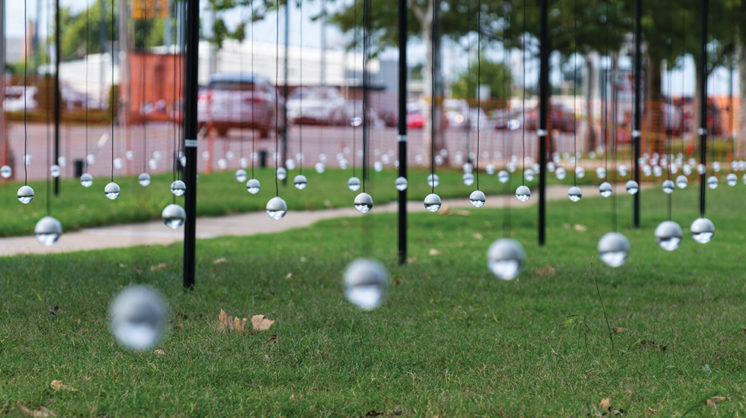 A new exhibition on display, a newer one in the wings, a new facility in the works and a new executive director overseeing it all – considering the organization’s commitment to modern creativity, there’s no better time than now for Oklahoma Contemporary Arts Center.

If you’ve been along Broadway through Automobile Alley recently, you’ve seen artist Erwin Redl’s installation “Whiteout,” a grid of 550 suspended LED bulbs that turn off and on in a series of moving patterns that interact with nature in Campbell Art Park. It’s also a scintillating way to draw attention to the immense construction project that’s currently underway: a 50,000-plus-foot collection of gallery spaces, classrooms, theater, sculpture park and much more that will carry the organization into the future in dazzling style. It’s scheduled to open in the fall of 2019, and fundraising – including a capital campaign and events such as the ArtNow gala (coming in January, but an exhibition of included works begins at the current facility Nov. 16) – is well underway.

Executive director Jan Taylor, who took over from Donna Rinehart-Keever in October, enthuses, “It’s a special time for Oklahoma Contemporary! Whiteout is now illuminating Automobile Alley, and ArtNow 2019 is about to brighten the fairgrounds. And, of course, we’re preparing to celebrate our 30th anniversary with a move to our new facility at NW 11th and Broadway. The greatly expanded offerings for adults and children will include quality art classes and camps, and exhibitions such as Whiteout will be our calling card. We know the Oklahoma City community and beyond will be very excited, as well.” Visit oklahomacontemporary.org to learn more.