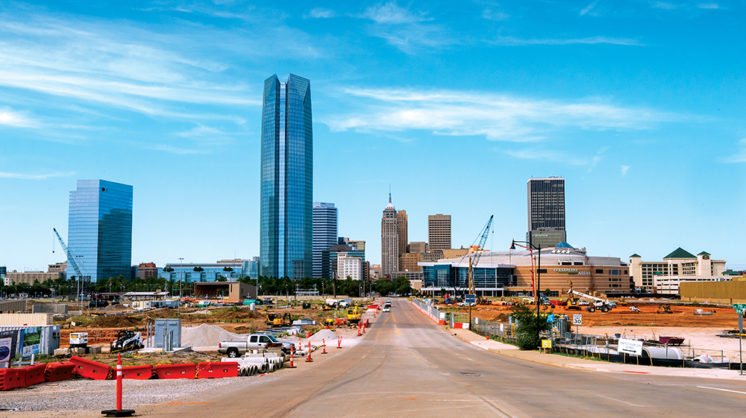 When Laura Massenat opened Elemental Coffee in Midtown in 2011, Hudson Avenue was still a one-way street. For decades, conventional thinking about traffic patterns in downtown business districts had been that a network of one-way streets provided the best means of dumping people into and getting them out of the central business district at the beginning and end of a workday. While that is an efficient system for work, it doesn’t provide a sufficient level of flexibility for people to live, eat and play conveniently in the same space. 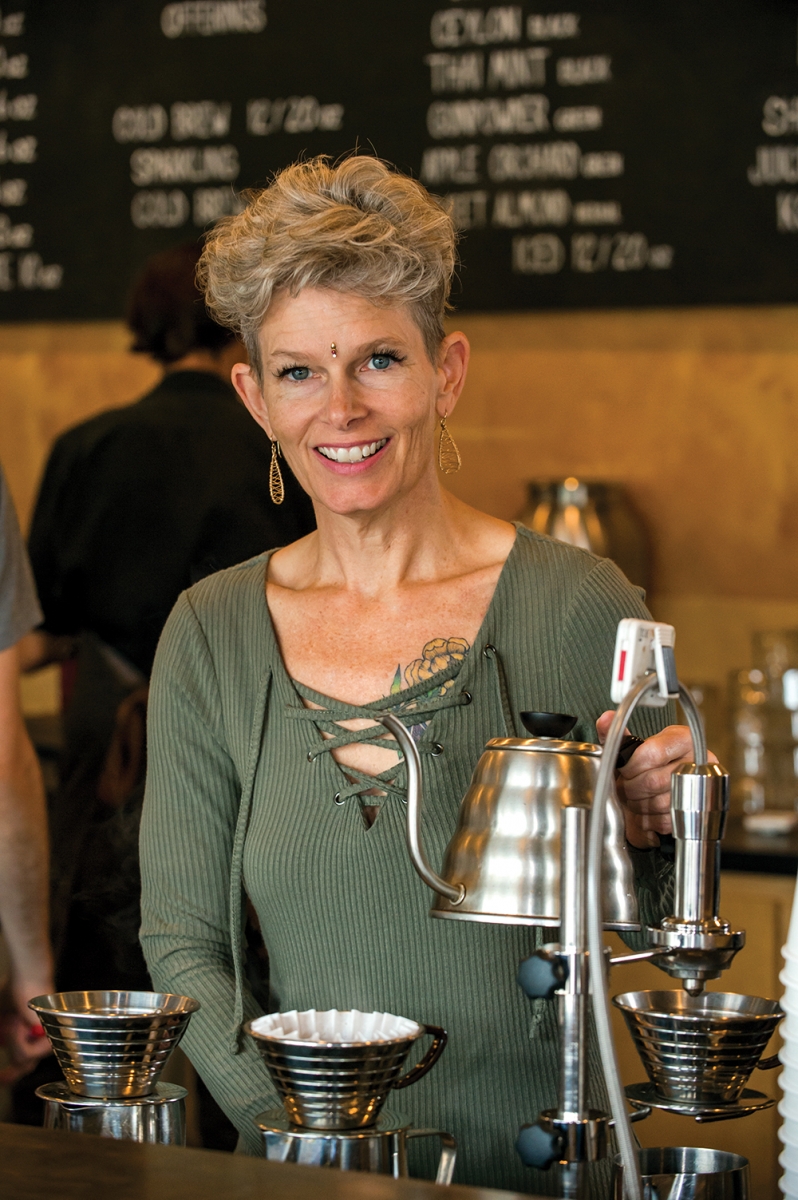 The City of Oklahoma City converted the Midtown streets to two-way in 2008, but the downtown roads had to wait until 2012. The city planners consulted with Jeff Speck, author of Walkable City, before the directional changes were made – and fortuitously, they followed Speck’s advice. Not only did the changes not cause the feared gridlock that more traditionalist thinkers had predicted, they also created a more livable, walkable downtown, a move that spurred further development in the urban core.

Using Spaghetti Warehouse as the pioneer, it’s easy to track the redevelopment of downtown. The now-defunct Italian eatery opened in November 1989, and it truly was a lone outpost in what was a cluster of abandoned warehouses in the quintessential blighted urban district. Four years later, everything changed, and as we celebrate the 25th anniversary of MAPS I this year, it is difficult to remember Bricktown being anything other than Bricktown – even for those of us who remember places like Dopey’s Playhouse and the red-tailed hawk that lived on the fourth floor of Tapwerks, where it hunted pigeons unfortunate enough to fly through the broken windows.

MAPS for Kids followed in 2001, and MAPS 3 in 2008, and both pushed the urban core closer to a livable, not just workable, context. The wave of openings in Bricktown after the passage of MAPS I, including The Mantel and Tapwerks in 1999, was followed by a crucial step in 2000 with the formation of Downtown OKC, a nonprofit organization tasked with overseeing the Business Improvement District that now includes all the downtown districts: Arts District, Automobile Alley, Bricktown, Central Business District, Deep Deuce, Film Row, Midtown and Park Plaza.

Midtown was already starting to show growth when Elemental opened; Stella Modern Italian and McNellie’s were on the scene, as was Prairie Thunder Bakery. The original Elemental roastery was on Main Street west of Penn, but Massenat wanted a more central location so they could showcase the craft and provide a level of coffee education for the city. Being on one of the main downtown thoroughfares meant catching a portion of the downtown workforce during morning drive time.

“We chose that location because we loved the building, and we liked what was starting to happen downtown – Ludivine, Cadence Yoga – and we originally envisioned a large enough number of customers in the central business district to support an urban coffee shop,” Massenat says.

The density wasn’t sufficient at the time, though, and Massenat quickly realized she would have to adjust to the reality of the market, which meant adding a food component (see sidebar). Converting to a counter-service restaurant proved to be the decision that turned Elemental into the community hub it has become. In fact, Elemental is a microcosm of sorts for the urban core: the move to the center of the city, the service for an initial commuter customer base, a decision to make the concept more conducive to staying longer, the use of community tables to foster, well, community.

Living and working in the core, for many people, means interacting with Massenat’s coffee shop. Walk in on any weekday and you’ll see a mix of customers – people who live, work or both in the core – reading, talking, working, eating, writing and networking. It is where downtowners come to see their neighbors, and it’s where they come to get things done, even if that merely means passing along news (or gossip) and encouragement.

Elena Hughes, an operating partner in Elemental, said that the shop and the entire core feel like a small town. “The feeling is everywhere you go down here,” she says. “Walking, riding your bike, dining in restaurants, at a neighborhood bar or even when shopping, you’ll see someone you know, and they actually don’t go out of their way not to say hello – something you regularly see in big cities.”

We talked to people who live and work in the core, as well as those who help shape what the urban core looks like, and we compiled short lists of favorite things from several of them. The answers were strikingly similar, and among investors, developers and real estate agents, we found people who are excited about the energy downtown. The city has held its breath in the past few years, wondering – sometimes silently, sometimes in whispers – when the energy would dissipate, when we’d return to being some old form of ourselves. Given our conversations for this story, that moment won’t come soon, and perhaps never. 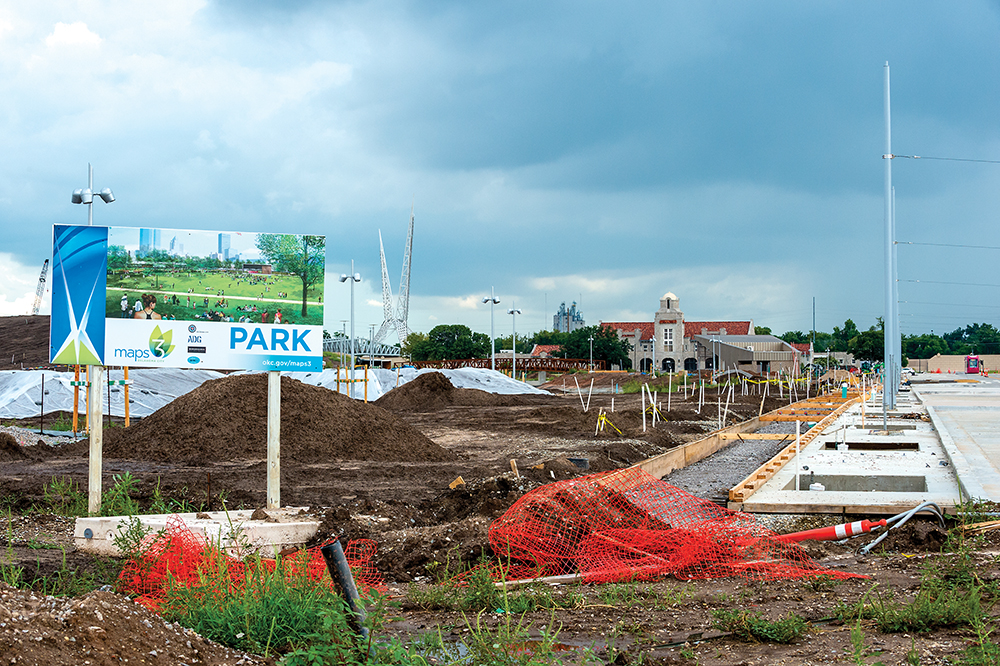 Tim McKay is a real estate broker with ARA Newmark Oklahoma, the firm responsible for overseeing the sale in the past few years of the Metropolitan apartments, Avana Arts District apartments and Sycamore Square (now The Haven), among others. McKay has been personally involved in the shift in investors’ perspectives about OKC.

“Seven years ago, Oklahoma City was still kind of a secret to outside investors,” McKay says. “The perspective now is very positive. We’re seeing sophisticated, well-capitalized groups looking here, and in many cases it’s because of job growth and the cooperation between private and public sectors that attracts them.”

That cooperation is best seen in the MAPS initiatives. Oklahoma City residents voted in favor of temporary tax increases three different times to spur development and improve the city, especially the urban core. McKay said outside investors noticed and responded.

“I’m tempted to say that MAPS is 100 percent of the reason they’re investing here, but that’s a stretch,” he says. “The number is high, though.”

As for the foreseeable future, McKay is “bullish” on investing in the core. The construction of parks, gardens, entertainment options, restaurants and other amenities has only made the center of the city more attractive to companies that build and sell apartment developments, and McKay said he sees more for-sale properties changing hands in the core as outside companies see Oklahoma City’s potential. 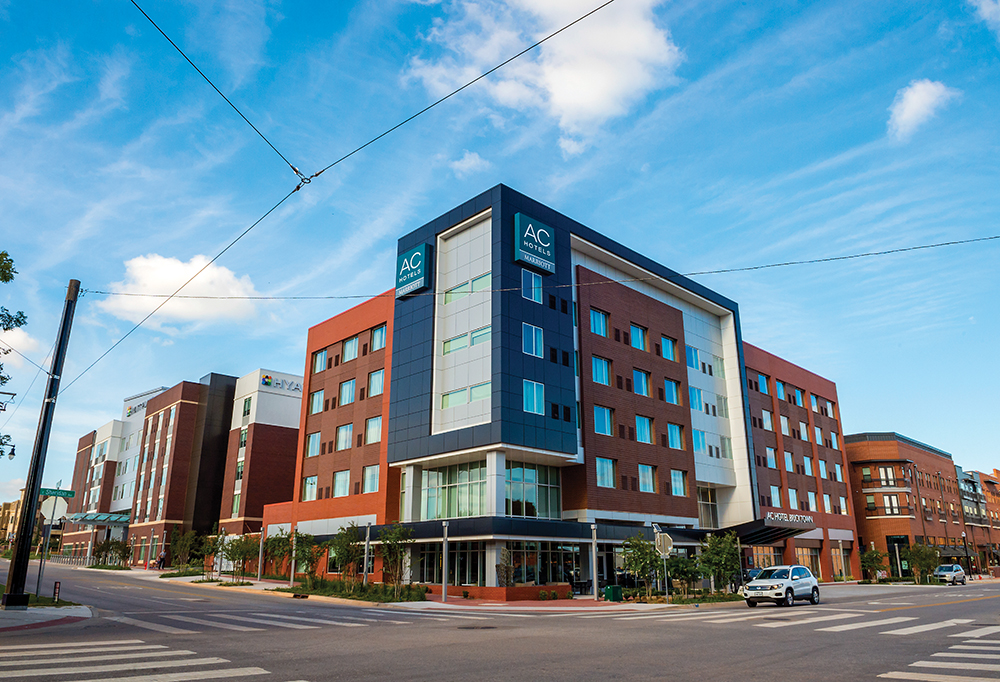 If things go according to plan, the number of hotel rooms within the area will increase from the 3,025 available at the end of July to nearly 5,500 by 2021. Those numbers are for the urban core only, not other hotel-dense stretches such as West Memorial and South Meridian. Mike Carrier, president of the Oklahoma City Convention and Visitor Bureau, said that there are currently 2,366 hotel rooms in some phase of development, including the plans for the Omni Hotel, which will have more than 600 rooms when completed.

However, he did say that there are some signs of slowing in this sector. “We had a couple of hotels that were supposed to start construction within the past 12 months, and they’ve delayed those projects. We think they are making sure the projected numbers will hold.”

Carrier said that the Omni Hotel, which will be the new convention center hotel, and the Autograph Hotel – currently underway at First National Center – are definite, and the number of rooms at those two concepts is causing other developers to consider whether they should be aggressive in the short term.

“It takes time for new developments to absorb into the economy,” Carrier says. “We don’t really know exactly how long, but we will have a better sense of the numbers in the next year to year and a half.”

After redevelopment of an urban area begins, growth tends to come in predictable phases. Gentrification pushes out marginalized people, locals invest in the newly gentrifying area, early successes breed interest in the larger metropolitan area, which spurs more locals moving to the area, and this is followed by a move toward real estate density; apartments, condos, restaurants, bars, shops and other businesses take advantage of the low price of real estate ahead of the cost-per-square-foot increases that come with success. 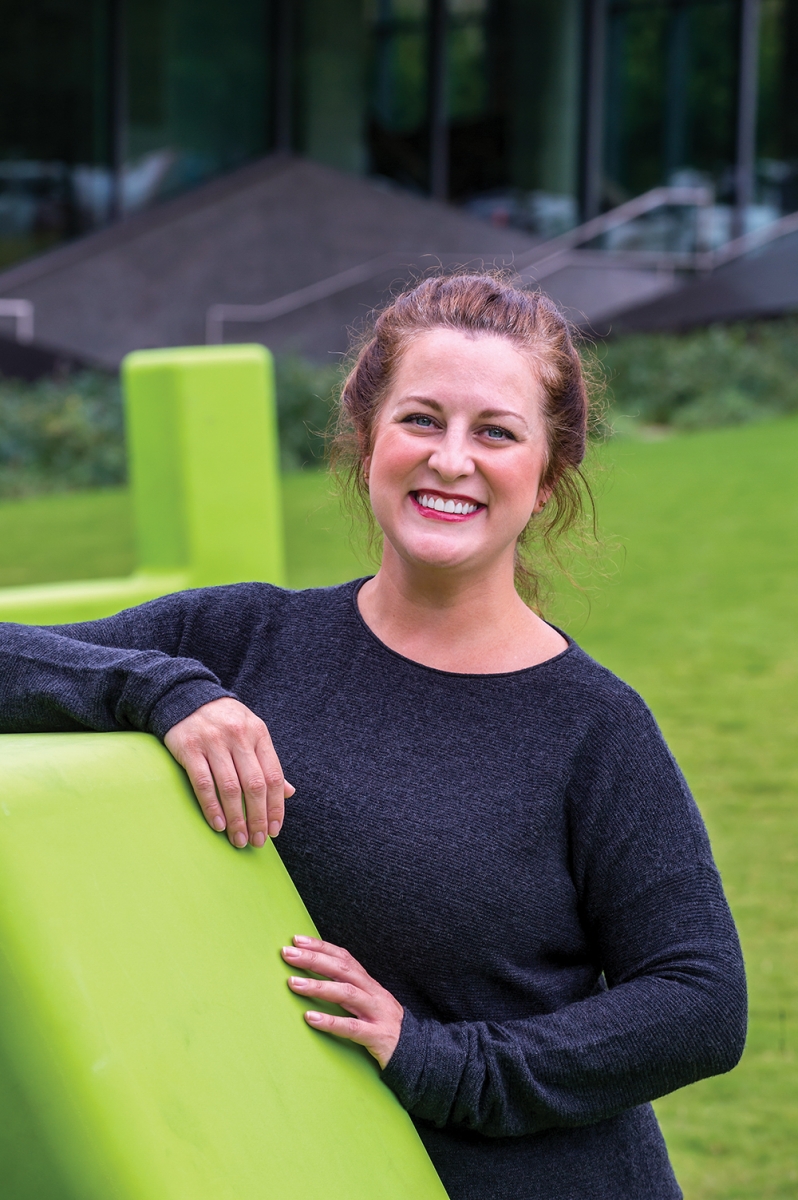 When done well, redevelopment eventually leads to outside interest in the form of regional and national brands. Oklahoma City is clearly in this phase now, and locals in the core have feared that outside investments will blunt local investment and involvement in their living space, creating a more generic set of options – think more Starbucks instead of Elemental, Subway instead of Café 7 and Claire’s instead of Black Scintilla.

Jill Brown DeLozier, vice president of Downtown OKC, said the businesses moving to downtown within the next year are a mix of local, regional and national brands.

“Most of the new retail and restaurants coming to downtown this year are locally owned,” she says, “and most of the corporations coming here – like Hogan Taylor and Global Payments – have national clients and other regional offices.”

The core is even attracting local businesses from inside the city itself. Echo Energy is a local firm on the Northwest Expressway that is moving its operations and 100 employees into the Parkside Building. 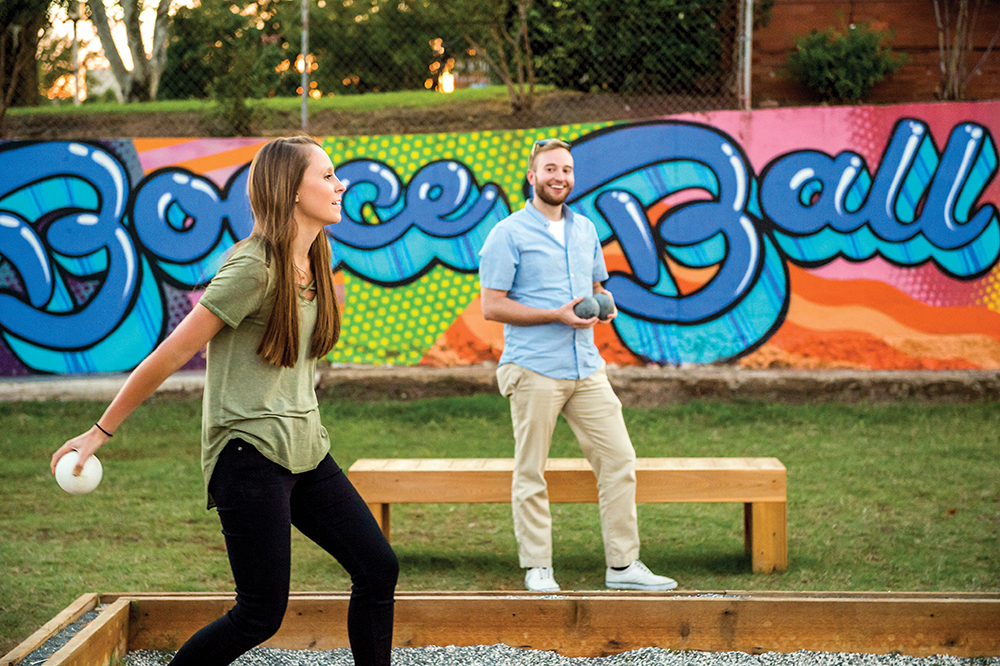 “They chose to move downtown because it’s clear that the city is investing in itself with new public transportation options and amenities like parks, sidewalks, trails and recreational activities,” Brown DeLozier says.

The beauty of a downtown space is that it condenses a wealth of amenities into a walkable, or at least “scooterable,” space. Brown DeLozier said companies that are trying to attract young talent are focusing on the urban core because they want their staff to be able to relax, eat and have fun where they work. For young professionals, especially the ones you see zipping around downtown on Bird and Lime scooters now that the Great Scooter War is winding down, the choice to live, work and play in the same space is a strong incentive toward recruitment and retention. 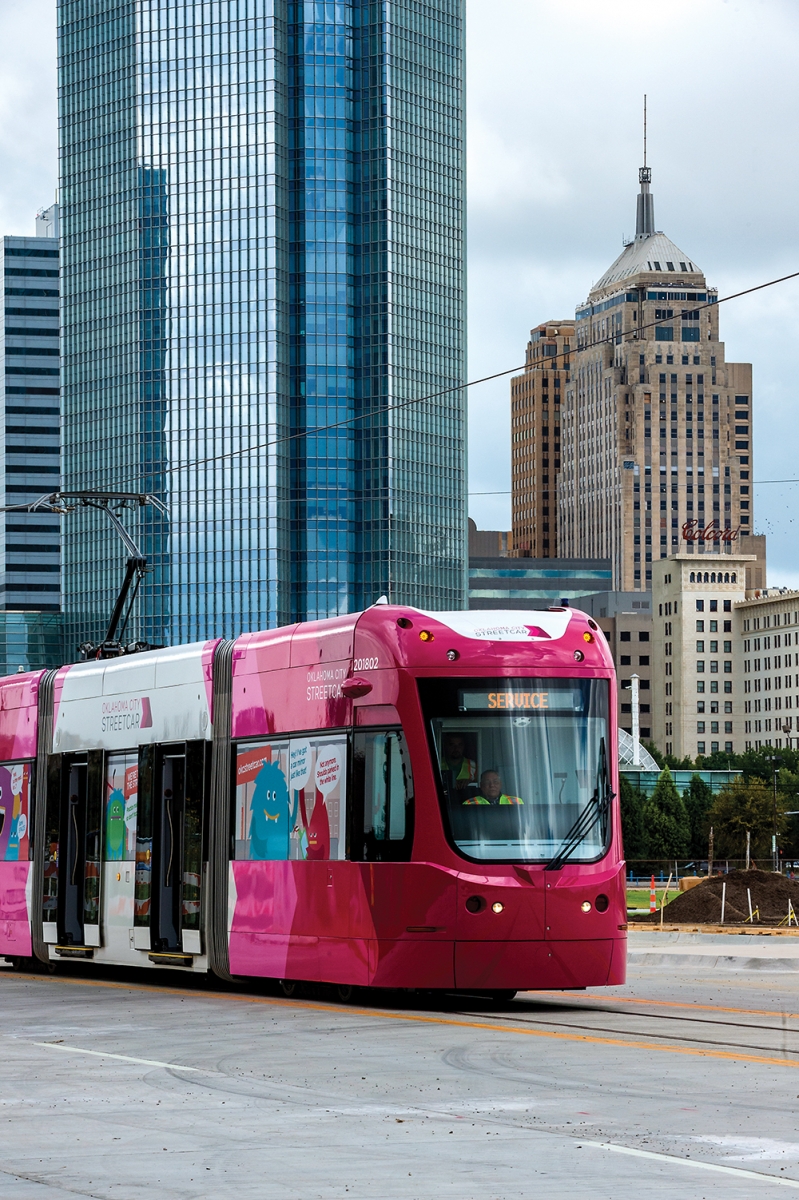 The streetcar is coming. Like it or not, and there are plenty of detractors, the construction will likely be completed in October. Kristen Torkelson, the streetcar construction communication liaison – and even she laughs when she has to say the whole title – said the goal is to have both routes operational by the end of the year. In fact, Embark is testing the downtown loop as this issue goes to print.

One of the benefits of the new transportation options, including the much-loved and much-hated scooters, is that Bricktown finally has a chance to be part of the larger downtown scene. While it’s often been consigned to the “tourist district” heap of options, Bricktown is home to dozens of local businesses, and the addition of a streetcar loop will finally make those options more accessible to residents of the core. The addition of 350 apartments at The Steelyard will also make the district more residential, even as it becomes more transitory with the addition of still more hotels.