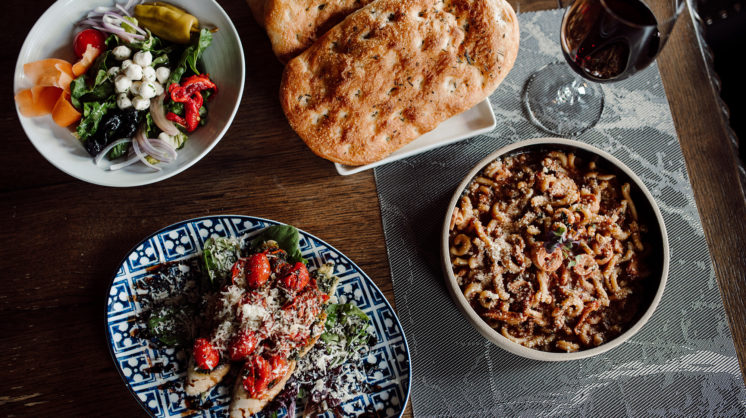 Enis Mullaliu arrived in the U.S. in 2000, a refugee from the Kosovo War. He and his family had sought asylum in the U.K., and eventually – with the help of Catholic Charities – made their way to Edmond, Oklahoma. Mullaliu, who owns Piatto Italian Kitchen at 2920 NW 63rd St., said his family and his cousin’s family were the first Kosovo refugees in Oklahoma.

“I was almost 18 when we got to Edmond,” Mullaliu says, “and I started working at Denny’s right away. I’d been a server in England, so food service was what I knew.”

Denny’s was a short gig, and Mullaliu soon moved into the local restaurant scene, with gigs at Vince Orza’s Pepperoni Grill and Coach House. The latter set the trajectory of his career in hospitality. With one brief exception, he worked for and with Chef Kurt Fleischfresser from 2004 until he bought the operation that is now Piatto in 2019. Previously, it had been Meat Market Refectory and Union Wood Fired Grill.

Buying a restaurant in a building with a history of failed concepts is always iffy, and COVID didn’t help. (We have reached a point where all statements about COVID should be assumed to be understated.) Thanks to his relationship with Fleischfresser, Mullaliu secured the services of executive chef Rolyn Soberanis, a 2007 graduate of the Coach House apprenticeship program.

The team seems to have come up with a strong formula for success in a building with a history best described as rocky. Mullaliu has long been one of the best front-of-house professionals in the state, as evidenced by the fact that he was Fleischfresser’s first call when Vast came looking for new management. And Soberanis can really cook, as is evident in his octopus and bone marrow dish that is one of the best bowls of pasta in Oklahoma City.

In terms of aesthetics, Piatto is now an amalgamation of previous concepts. Mullaliu has tweaked the interior in positive ways, so that much of the old casino-esque vibe is gone, and the place is spacious enough to seat diners comfortably during a pandemic and still have room to spare for private events.

The large bar is the first thing diners notice, and it is worth noting that the cocktails are the best we’ve tried at an Italian restaurant. The genre is known for going all in on wine, and leaving cocktails as an afterthought. Not at Piatto. House-made limoncello is the heart of three concoctions, including the delicious Italian Mule. The by-the-glass wine list is all Italian, but the bottle list features popular domestic choices.

Soberanis describes his kitchen as 98-percent scratch. Only two things aren’t made in-house, and one is a gluten-free pasta. All other pasta is made fresh in Piatto’s kitchen, as are all the sauces. The focaccia bread is actually a bit of a hybrid – a delicious, fresh-baked hybrid – that the kitchen at Piatto developed in house. The pride in what Soberanis does shows in the marvelous attention to detail, from the Moroccan olives on the Italian salad to the bone marrow compound butter in the casarecce and octopus dish to the perfectly fluffy, flavorful gnocchi.

If you’re going to make a concept work in a building where concepts haven’t before, great food is a must, and Piatto delivers. The restaurant is a testament to what two salty food-service veterans can do when they apply an abundance of talent, experience and determination.