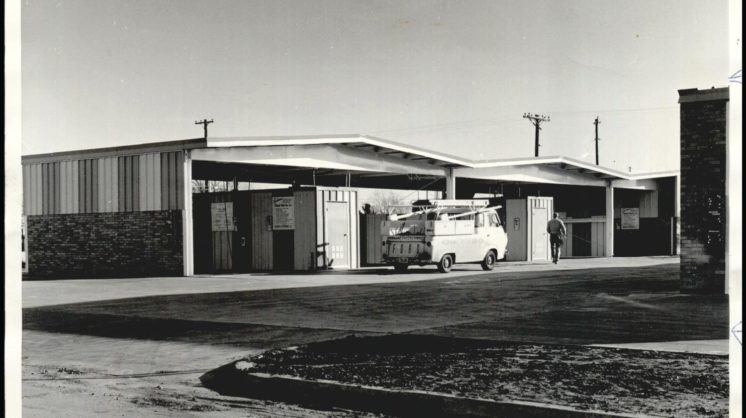 Photo Courtesy of The Oklahoman

Someone has written something snarky in the cake of dust on your car, like, “Wash me!” So, dutifully, you drive up to a car wash, swipe your card, and wait for a pleasant voice to say, “You may now enter the car wash.” Ninety seconds later, you have a car that’s been washed, waxed, and buffed dry.

It’s a 20th-century invention that rivals space travel and microwave ovens. And it’s due—at least in part—to two guys in Ardmore who launched the world’s first coin-operated car wash on Thanksgiving Day in 1962.

Inventors Jack M. Thompson and Travis Harris met in the late 1950s when Thompson, then a salesman of coin-operated laundry equipment, took a fishing trip to Texas. Harris was the boat operator, according to an account in The Daily Ardmoreite.

Although neither of them had formal training, each shared an entrepreneurial spirit and a love of nuts and bolts—literally. Thompson was the son of an Ardmore lawyer and a serial tinkerer. Harris had been a farm boy who, like most farm boys, learned how to repair anything remotely mechanical by the time he could hold a wrench.

That day, on a boat in the Gulf of Mexico, the two hatched their ideas for revolutionizing industry. The first invention was a coin-operated hair dryer that could be installed in laundromats across the country. That one apparently didn’t see much success. But the coin-operated car wash that followed was an immediate sensation.

“A total of 60 cars went through the one stall that day,” reporter David Smith wrote in a 1963 article in The Daily Ardmoreite. “The men began tooling for production immediately at their plant at Hwy. 70 and C. St., NE.”

Customers were given use of the stall for 25 cents for 5 minutes. Washes typically clocked in at 10 minutes per car.

They also launched the daring but innovative idea of employing self-service gas pumps at each car wash, which, based on the tepid response, proved to be 15 years ahead of its time.

In the years that followed, the coin-operated car wash became so successful in Oklahoma that in 1965, Goodrich Industries launched a national training center in Norman for owners of coin-operated car washes—a nerve center for car wash innovation and research, according to a Jan. 31, 1965, report in The Daily Oklahoman.

“Elvin R. Goodrich, Oklahoma City, president of the parent company, said the state was chosen for the center because of variable weather conditions, ranging from sub-freezing temperatures to hot, humid climate,” the article said.

Although the first car wash is said to have opened in 1914, followed by the first automated car wash in 1946—in where else but Detroit— the coin-operated car wash captured the consumer’s appetite for do-it-yourself service that today has become a staple of commerce.