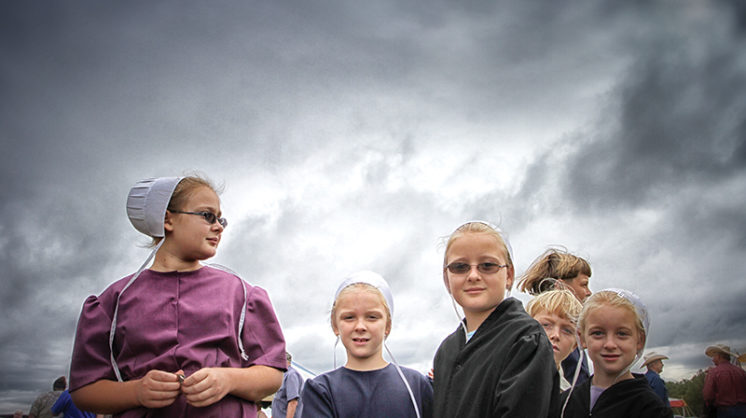 First off, I totally could have won the 2016 Women’s Skillet Throw in Chouteau.

When the announcement went out in the park’s Horsin’ Around Corral for pan-throwers, I figured since I wasn’t Amish, I wasn’t qualified. Which is a shame, because I had been a discus-thrower in high school and have been waiting for someone to ask me to hurl an item ever since.

Still, it’d be fun to see. So I bided my time while contestants gathered, checking out the tables offering woodworking and ribs and pies for sale. I realized too late: you didn’t have to be Amish to enter.

The tattooed and bouffanted and bedazzled skillet-tossers far outnumbered the handful of contestants wearing bonnets and ankle-length dresses. Each took a turn selecting a frying pan from a pile of old cookware. The crowd oohed and ahhed at the tosses, and shrieked in delight as some rolled a few feet. Others careened out of the corral, causing spectators to duck. None of the throws were the stuff of legend.

If only I’d known that all were welcome. But it was a lesson learned: With the Oklahoma Amish, never assume.

In a culture known for rejecting modern lifestyles and technology, from cars to zippers to television to education past eighth grade, visiting Oklahoma’s fall Amish fundraising festivals was enlightening. Both events thrive by welcoming visitors of all stripes, from the completely non-Amish to traditional Amish to the I-didn’t-know-Amish-could-do-that-Amish.

At Black Buggy Day in Chouteau and the older Amish School Auction in Clarita, the Amish were far outnumbered by “the English,” non-Amish friends, neighbors and curiosity seekers. 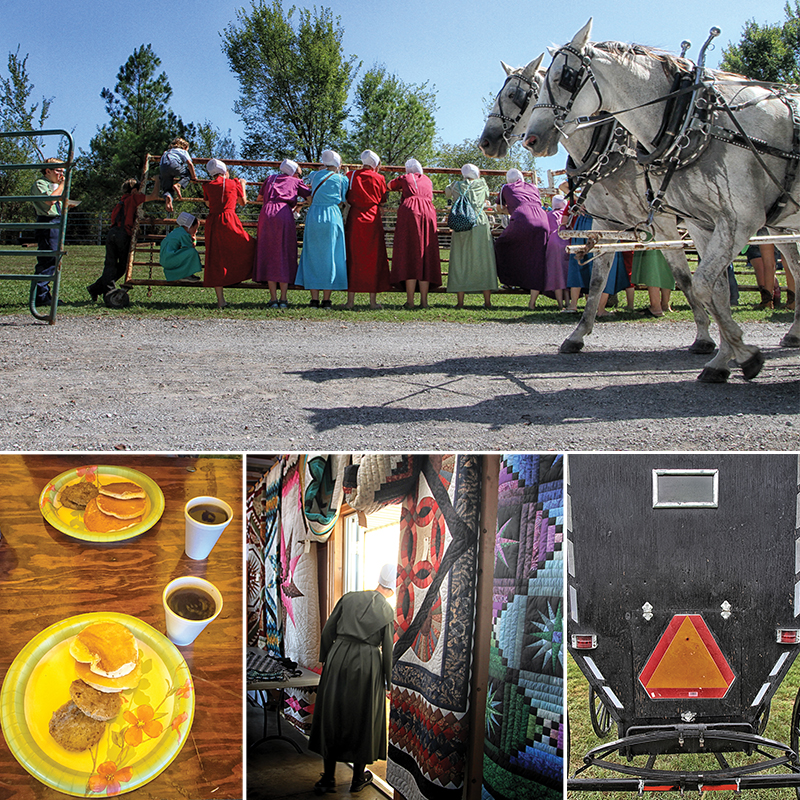 In case you have a romanticized idea that Amish life resembles the movie Witness, know that there are no slow-motion hayfields waving your way into the festivals. No solemn line of black buggies. No soft-focus horses pulling plows.

Beginning soon after dawn, a parade of cars and mostly trucks turns off State Highway 31 near the decidedly unromantic fields north of Clarita. Parking is $5.

At the open-air breakfast, the smell of pancakes and sausage wafts over the grounds. After paying $7 for all-you-can eat, you pass through the line with a paper plate and choose a seat at one of the long tables. Awaiting you is not fresh creamery butter, but a bucket of Parkay and a bottle of Aunt Maple’s Original Syrup, purchased in bulk from Aldi. Aunt Maple’s top three ingredients: high fructose corn syrup, corn syrup and water.

But the sausage is delicious, shipped down from the Yoder Farm in Kansas. Friendly Amish women circulated between the long tables, asking if anyone wanted seconds and thirds.

Outside the breakfast tent, auctions are held across the grounds like a 10-ring circus. Items range from antiques and livestock to old playground equipment and a buffalo robe. There is a battered tuba. Old paintings. Three miniature ponies with saddles. A rusty bike. A set of dishes. A live peacock.

Clarita’s signature event, the quilt auction, features more than 100 colorful quilts and weavings, hand-sewn by Amish seamstresses. The opening work, done in an intricate Japanese fan design, fetches $1,000 to kick off the packed house that featured more spectators than bidders.

Away from the auctions and food booths, the vendors channel an arts-and-crafts-meet-“Duck Dynasty” vibe. Items such as lawn ornaments, cutting boards, grill accessories and rattlesnake-hide keychains cut in the shape of Oklahoma ($10 apiece; two bucks more for the ones with a rattlesnake-skin ball) are interspersed with Amish-made wooden rockers, gliders and dining sets. Confederate flags flap in the wind, along with variations of the yellow Don’t Tread on Me flag, silhouettes of a star and AR-15 carbine with “COME AND TAKE IT” and professions of allegiance to colleges and football teams. 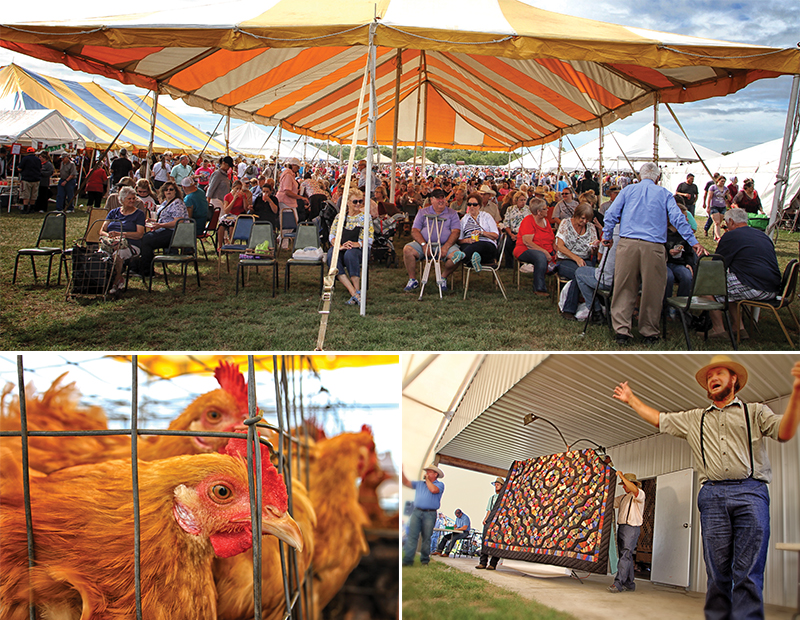 The next weekend in Chouteau, near the entrance to Black Buggy Day, the Highway Ministry Riders out of nearby Pryor manned a tent marked by the sign “Bikes Blessed Here,” near their membership banner from the Christian Motorcyclist Association: Riding for the Son. Another group, perched on a pickup by the tractor pull, was raffling off chances for a gun safe.

An Amish girl watching the tractors looks down, distracted, and checks her cell phone. An Amish boy by the pony rides pulls his wooden gun on me, squinting down the barrel and whispering pow pow pow. An Amish man, in traditional broad-brimmed hat and long beard, drives a battered Ford 1100 tractor around the park, towing kids behind him in a chain of 10 plastic barrels cut in half and mounted on wheels. Some of the Amish teens wear reflective wrap-around sunglasses. One drinks a can of Coke.

The mashup of old and new and evolving expectations illustrate that modern Amish want “not the right to remain the same, but the right to change at their own pace and in their own season.” Scholar Garrett Epps notes: “They remain irreducibly other, stubbornly themselves. We have tried and failed to absorb and Americanize the Amish – and we should be grateful that we failed.”

I remain grateful, as well, that the skillet throw will be featured again at next year’s Black Buggy Day. This time, I’ll know that I’m welcome.

The news out of Oklahoma’s Coal County in the spring of 1995 was so startling, it made the front page of The New York Times: “Some Amish to Use Tractors; Those Opposed May Move.”

The Clarita enclave of Old Order Amish had established a foothold in Oklahoma in 1978. Amish farmer Chris Yoder moved from Ohio to the unincorporated town of about 200 people, and purchased the old Rice farm. Others followed.

The Clarita Amish kept to the traditional Ordnung, the code of conduct for a way of life: no motorized vehicles; no divorce; no military service; no television or radio; no education past eighth grade; modest, home-sewn clothing; hats and suspenders for men; prayer bonnets for women; no jewelry; beards for married men, like the patriarchs of the Bible.

But after years of farming the rocky, hard-scrabble Oklahoma land, the community of 26 Amish families voted to break with tradition … at least a little. Tractors would be allowed in the field.

Raymond Miller, a minister and farmer, told of their dilemma: “We farmed with horses for the first couple years. We really all tried. Well, with good horses, we could plow two acres a day, and you plow 10 acres … it’s just a completely different ball game than what we had back East. The reason we agreed to go on and use the tractor ourselves, own the tractor, was so that more of our young people can stay on the farm and raise the family at home.”

After the vote, the Amish who disagreed with allowing tractors, fearing the abandonment of traditional ways, moved back north to more conservative orders. 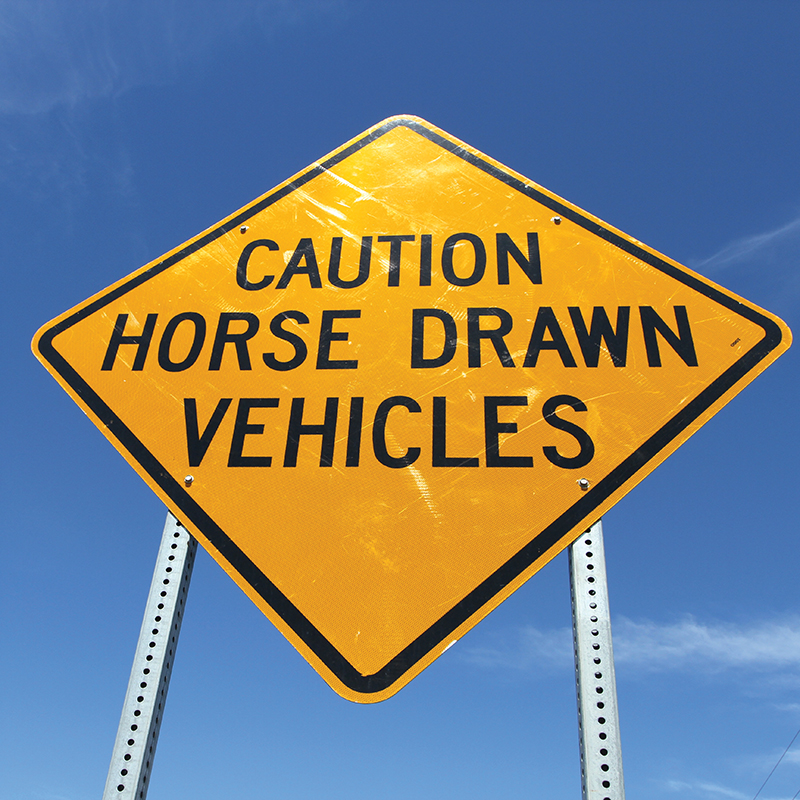 “The Amish do not consider technology evil in itself, but they believe that technology, if left untamed, will undermine worthy traditions and accelerate assimilation into the surrounding society,” says Donald Kraybill, senior fellow emeritus at Elizabeth College’s Young Center for Anabaptist and Pietist Studies. “The Amish seek to master technology rather than become its slave.”

Two new Amish communities, both formed by a handful of families in the state during the past six years, are in the towns of Welch, in Craig County near the Kansas-Missouri border, and Westville, in Adair County near the Arkansas border.

Oklahoma’s oldest and largest Amish community is in Mayes County, in and around Chouteau, population 2,100.

Founded in 1910, and now with four church districts and a combined membership of more than 600, the Chouteau Amish have allowed tractors for years despite the fear that rubber tires might take them far enough away that they would forget where they belonged.

Decades later on the Chouteau main drag – home to thriving businesses such as the Amish Cheese House and the Dutch Pantry – farm tractors park in front of stores as the farmers drive into town for errands. The horse-and-buggies are saved for Sundays.

The Amish are descendants of the 16th century Swiss Brethren Anabaptists, who sprang from the Protestant Reformation. The Anabaptists, or “rebaptizers,” believed in voluntary baptism of the faithful, irking Protestant and Catholic authorities by baptizing not infants, but consenting adults.

In 1693, escaping persecution in Switzerland, Jakob Ammann formed a distinct group of followers – the Amish – in France, where he stressed New Testament teachings and outlawed fashionable dress and the trimming of beards.

The first Amish immigrants to the United States settled in Berks County, Pennsylvania, in 1736. The numbers of U.S. Amish have jumped from an estimated 6,000 before World War I to more than 300,000 today, thanks to large families where nearly all of the children opt to become baptized into the religion as adults. Converts are allowed, but rare.

The first Old Order Amish families in Oklahoma Territory came from Kansas in 1892, on Land Run parcels near Thomas in present-day Custer County. The last Old Order Amish left Thomas in 1960. The community had voted to use tractors in 1937, and eventually embraced electricity and automobiles before evolving into the Beach Amish-Mennonites. Another group of Kansas Amish moved to farmlands near Watova in Nowata County in 1931, but abandoned the settlement in the middle of World War II.