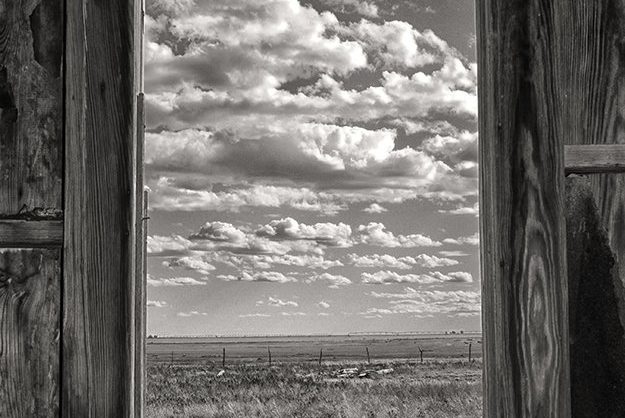 The shed is long gone, collapsed and consumed by the soil of the far western Panhandle of Oklahoma. The sand has settled or blown away. The parched tenant farm itself has been absorbed by a larger operation, made green through irrigation and indistinguishable from the miles of fields that surround it.

But the legacy of the historic photograph of a farmer and his two sons leaning into the wind of the Dust Bowl, hurrying across the drifts past a ramshackle shed, remains. The image was taken by Arthur Rothstein in April 1936, one year after the epic storms of Black Sunday, and published that month in newspapers across the nation. The family fleeing the storm has become one of the most recognizable moments of the 20th century.

Writing for The New York Times in 2009, documentary filmmaker Errol Morris noted: “It’s an iconic photograph. It’s a photograph that will be around for a long, long, long time, and captures something so powerful … In the ’30s it was a plea for help; now it is a story of triumph over adversity. It is how we have come to see an entire era.

When first published – 77 years ago this month – the names of the farmer and his sons were not included in the caption: “Farmer and Sons Walking in the Face of a Dust Storm, Cimarron County, Oklahoma, April 1936.” They were everymen, caught up by elements beyond their control. 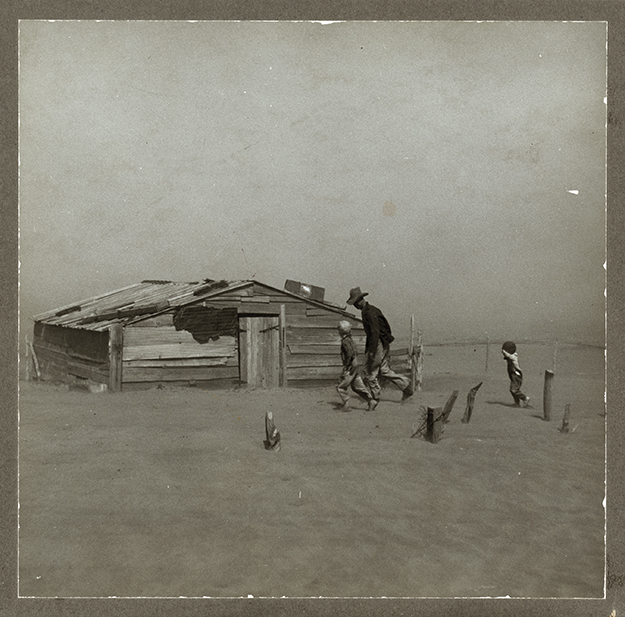 The components of the image have long since faded, returning to the Oklahoma dust. The shed. The fenceposts. Even the father and sons themselves, buried near one another beneath the prairie not far from where the photograph was made. But a legacy of true grit lives on in the family it immortalized: The Cobles of Cimarron County.

The farmer, Arthur Coble, started his life June 10, 1896, in Sailor Springs, Clay County, Illinois. He was the fourth of eight children, and oldest son, of William Allison Coble and Mattie Ellen Armstrong Coble and moved to Oklahoma with his family soon after statehood. Arthur was mustered to fight in World War I out of Guymon in 1918, but Armistice Day arrived before he had a chance to ship out. He married schoolteacher Mable Kelly in Boise City on May 14, 1927. By the time Rothstein visited their farm nine years later, the couple had four children, all born on the land: Ona Ozzelee, Milton Garth, Darrel Arthur and Beverly Ann.

Darrel, the little boy in the photograph, was asked two years before he died about growing up in the Dust Bowl. “Ah, it kind of scared me, best I can recall,” he said with a chuckle. “I thought maybe the world was coming to an end, I didn’t know.” Why would he stay rooted in a place where day-to-day survival was such hard work? “It’s just home. Dad always says, ‘Anybody ever come out here and wear out two pairs of shoes here, they’d never leave.’”

Arthur and Mable Coble’s family lived on rented ground, six people in a three-room house. The sand drifts blocked the door of the shed in the Rothstein photo, so baby calves were hoisted out of the wind and into the shelter by lifting the sheet of tin like a trap door. 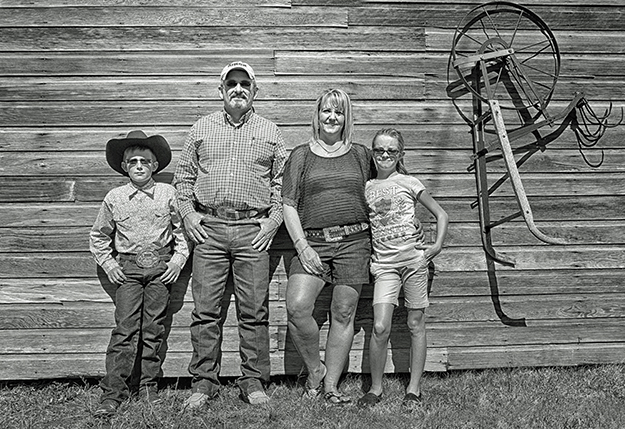 As adults, the brothers would make light of the hard times. In the 1970s, Darrel recounted, “During the storms, we’d eat in bed. Less dust.” Their house did not get indoor plumbing until 1947, after World War II. In the meantime, Milton said, “We took our Saturday baths in a galvanized tub behind the kitchen stove, with walking water. You had to walk to get it.”

Whether because of the lingering effect of years of trying conditions or just a string of bad luck, much of the Coble family died young. Arthur died of pancreatic cancer on November 16, 1956, at the age of 60, and was buried three days before Thanksgiving. Milton – his oldest son, striding beside him in the photograph – was plagued by bleeding ulcers, dying October 24, 1973, at age 43. The youngest child, Beverly, was found dead at age 41 on December 9, 1976, with heart attack listed as the official cause of death. Darrel was felled by heart problems on November 19, 1979. He was 46. Ozzelee, the oldest, perished February 1, 1981, trapped in a fire in her mobile home. After outliving her husband and all four of her children, Mable Kelly Coble was laid to rest in 1984 at the age of 83.

In an interview with Bill Ganzel in the 1970s, Darrel said some of Arthur’s family had done well in California and offered to help the Cimarron Cobles move out of the Dust Bowl. “They said they’d pay his way out to California, the whole family, but he said he wouldn’t go. He was just a hard-headed Coble, I guess. He was pretty independent. I just imagine he thought that if it was going to be somebody else’s money, why, he wasn’t gonna go, period.”

Darrel, the toddler in the photograph, left Cimarron County in 1952 for a four-year stint as a Marine sergeant during the Korean War. On leave back home, he met teenager Clara Lawrence. Their son Lloyd recounts: “Dad flipped her a dime and told her to call him when she was older.” They married after Clara turned 19, on September 23, 1956, and raised three sons – Keith, Charles and Lloyd – and a daughter, Tracey. Over the years, the family worked their 190 acres, 12 miles west of the old rented place, while Darrel also held outside jobs over the years for the county highway department, at the helium plant in Keyes and as the driver of a propane truck. 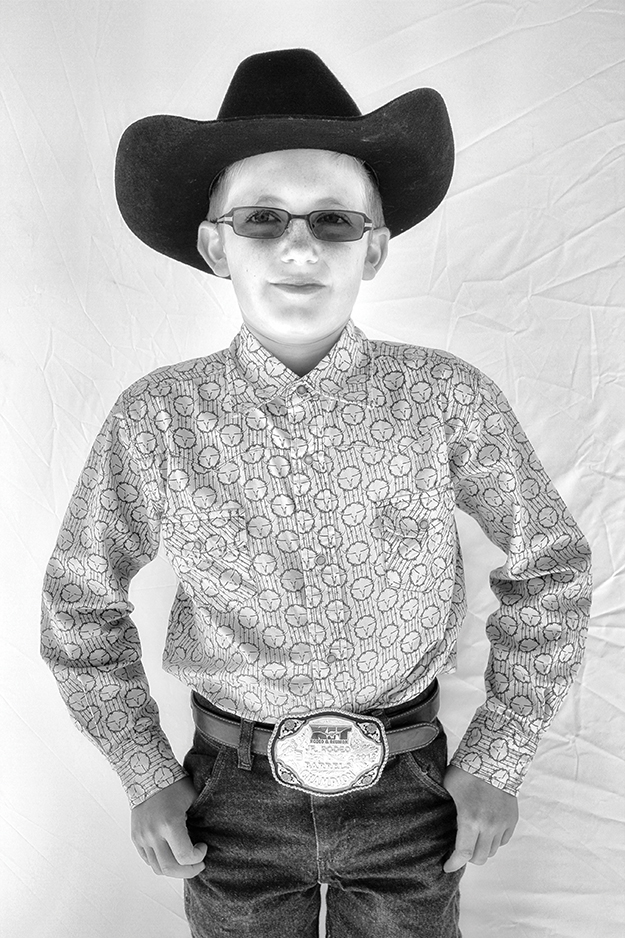 Only Lloyd has stayed in Cimarron County with the next generation of Cobles. He has opted out of farming and lives in town, a superintendent for the Oklahoma Department of Transportation. In September, he will celebrate 20 years of marriage with his wife, Valerie, whose nail and hair salon is by the Loaf ‘N Jug in Boise City.

Just before their 20th wedding anniversary, in 1976, Darel and Clara Coble were surprised by another pregnancy. Their fifth child, Austin Trevor Coble – his name inspired by the novels of Louis L’Amour – was born prematurely and died Feb. 25, 1977. He is buried near his parents and grandparents in Bertrand Cemetery, southeast of Felt.

Their markers are of simple granite, with Coble etched atop. Arthur and Mable’s names are carved in pink granite with flowers blooming, right and left, in the upper corners. Milton’s gravestone has a similar design, with the name and birthdate of his wife, Martha. Widowed just after her 40th birthday, she will turn 80 this September and never saw the point in remarrying, because she’d never find another man as good as Milton.

Of the graves of the men featured in the photograph, only the marker for Darrel and Clara is different.

Centered at the top of their gray headstone, just above the uppercase COBLE, a sepia-toned photograph is inset into the granite. It is of a little boy rubbing sand from his eyes and chasing after his family in the Oklahoma dust. 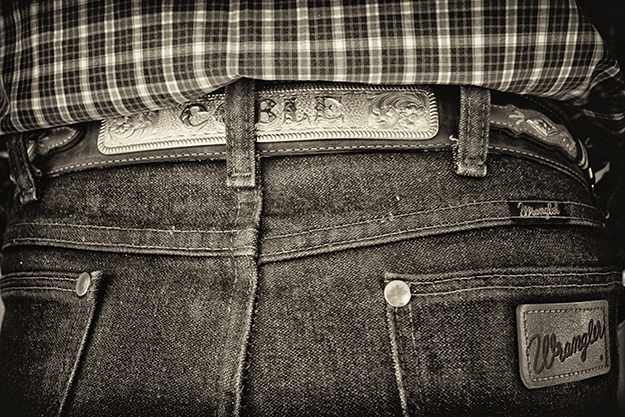 At the time 21-year-old photographer Arthur Rothstein from the federal Farm Security Administration stopped by a dusty Cimarron County plot of land that day in 1936, Arthur Coble and his sons were out on the parched land digging fence posts. Rothstein’s contact sheets show a series of images of the farmer and his older son working, with the younger boy playing in the sand.

The last photo of the roll – with Arthur and his oldest boy, Milton, striding together in synchronicity and Darryl, not yet 3, scurrying behind to catch up, shielding his eyes from the sand, nearly indistinguishable from the half-buried fence posts – is so theatrical, possessing such artful composition, that a cabal of doubters have claimed it must have been set up.

The Coble family and Rothstein always have been adamant that it was a documentary moment, a split second from years riding out the Dirty Thirties.

On the 25th anniversary of the photo, in a LOOK magazine spread from October 24, 1961, Rothstein remembered: “I was about to get into my car when I turned to wave to [Coble and his two sons]. And I looked and saw this man bending into the wind, with one of the boys in front of him and another one behind him, and great swirls of sand all around, which made the sky and the earth become one. And I said, ‘What a picture this is!’ and I just picked up my camera and went ‘click.’ One photograph, one shot, one negative.” 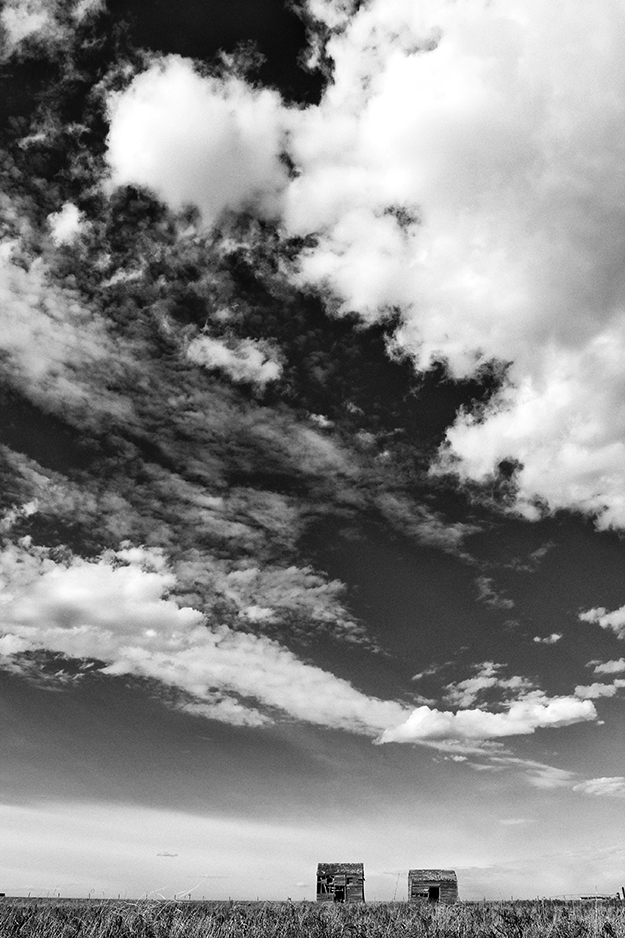 In an interview with the Smithsonian Institution’s Archives of American Art on May 25, 1964, Rothstein spoke at length about the image and its importance:

When my picture of the dust storm was printed widely, over and over and over again, it made people realize that here was a tragedy that was affecting people – it wasn’t just affecting crops, but it was affecting people – the relationships between the dust storms and the migrations of people out of this part of the United States and the way it was affecting them individually. This photograph had a great deal of influence on people in the East, for example, who had no contact and no sense of identity with this poor farmer walking across the dusty soil on his farm in Oklahoma – it gave him a sense of identity. And it helped me put a lot of these soil-conservation practices in, and provide legislation for soil conservation to remedy these conditions.

In the beginning, it was a record; after that it became a news picture, it then became a  feature photograph, eventually it became a historical photograph, and now it’s considered a work of art in most museums. It’s a picture that went through a kind of evolutionary process all by itself. It has a life of its own.