Oklahomyths: Home of the Dome - 405 Magazine 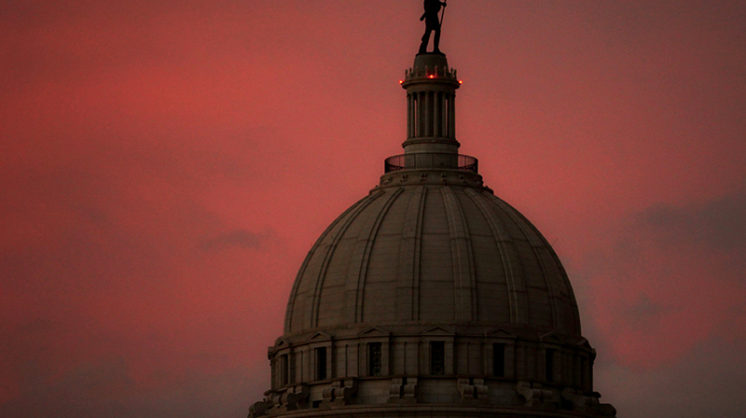 Ask a random Oklahoman about the Capitol – the building that houses our state government – and if they don’t mention oil wells or Ten Commandments or “American Ninja Warrior,” or make reference to its current architectural disrepair, odds are good they’ll say something about the dome. It was the subject of much discussion when built, well after the building itself, but did we really need one to avoid the ignominy of being different than other states?

THE CLAIM: The original State Capitol building, completed in 1917, 10 years after statehood, went without a dome for almost a century – the only statehouse in the nation without one.

FACT CHECK: Eleven U.S. state Capitol buildings do not have a dome: Alaska, Florida, Hawaii, Louisiana, New Mexico, New York, North Dakota, Ohio, Oregon, Tennessee and Virginia. It’s 12 if you count Nebraska, whose Capitol is surmounted by a 400-foot tower that has its own diminutive dome on top.

HOWEVER:  Oklahoma is unique in that it was the only domeless Capitol to have had a dome in its original blueprints, designed by Solomon Andrew Layton. Construction on the $1.5 million building, inspired by classic Greco-Roman architecture, began July 20, 1914, and concluded on June 30, 1917; as money grew tight and World War I dragged on, the dome was ruled superfluous. In advance of the state centennial, private funds were raised for the project – which came with a price tag of $21 million, 14 times more than the original building – and construction on the long-awaited dome began in 2001. The addition was dedicated the next year on Nov. 16, Oklahoma Statehood Day.

So the Sooner State’s seat of government now has a distinguished-looking chapeau. Economic concerns being what they are, however, the recently proposed addition of a reflecting pool and arch (at an estimated $28.5 million) may not be in the cards. Although Hawaii’s citizens got its Capitol a pool …