On the Road Again: The AAA Glidden Tour Returns - 405 Magazine 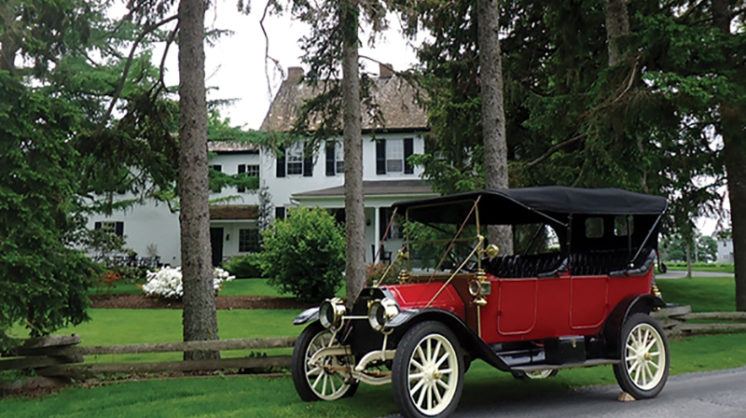 On June 23, 1910, 15 cars rolled into Oklahoma City as part of the Seventh Glidden Tour. The tour was an endurance race across the U.S. to showcase the reliability of automobiles.

Just eight years before, the American Automobile Association formed, and they started the tour in 1902 in hopes of increasing the visibility of what were then relatively new and rare machines.

In a picture published in The Motor World, an enthusiast magazine of the time, the automobiles are shown lined up in front of Acme Sign Manufacturing Company directly across the street from where wagons are hitched. The picture captures the contrast of horse-drawn vehicles – the “workhorses” of the time – alongside the novel machines that would make them superfluous.

For the first time since 1910, the Glidden Tour is coming to Oklahoma. The tour will feature antique automobiles from all over the country, plus a few international cars as well. Cars must be at least 25 years old to qualify as antique. Technically, the 1970 AMC Gremlin or the 1979 Ford Pinto hatchback are antiques by that standard, but the car collectors who are part of the Glidden Tour have their sights set a bit higher.

Eighteen of the 250 or more expected cars on this year’s tour are over 100 years old. The oldest is a 1903 Cadillac, built at a time when the cars still looked very much like a horseless buggy. Twenty-eight manufacturers will be represented. The participants tend to focus on automobiles made before World War II, and all the cars are pre-1943. The cars must be “historically correct,” a requirement that allows for modifications available the year the car was manufactured, like the boat tail kit Cadillac offered for a few years beginning in 1931.

The cars will be in Oklahoma from August 30 through September 4, and the public is invited to view the cars at lunch each day. They are typically trailered at night, so the lunch stops will provide the best viewing. On Wednesday, September 2, the cars will be parked in Automobile Alley for the viewing, and a three-block stretch of Broadway Avenue will be closed off for the event.

The Tour will visit Blanchard, Edmond, El Reno, Guthrie, Hinton and Norman. Red Rock Canyon will be the longest day trip for this tour. The day trips include optional activities for the participants as well as the lunchtime viewings. Jeff Lytle, tour chairman for the 70th Revival AAA Glidden Tour, chose the route. He said maximum speed limits for the roads have to be 45 miles per hour.

“I think I drove about 4,000 miles while I was mapping out the route,” Lytle said. “Some of the cars can’t reach speeds of 45 miles per hour unless they’re going downhill, so we go in small pods instead of one long, slow procession.”

Lytle said the tour started as a “fun run” in 1904, but a point system was added later, and the tour was a competition for many years. “There were nine starting points on the East Coast the first year,” he said. “The cars were making their way to the St. Louis World’s Fair.”

As difficult as it is to imagine now, the nation was locked in a fierce debate about the efficacy of the automobile as a reliable means of transport. This situation was not made easier by various governments’ attempts to write legislation for the cars.

“England had a law that anyone driving a car had to be accompanied by someone on foot carrying a lantern,” Lytle said. “The laws were odd wherever there were automobiles. They were so new and people did not know what to make of them.”

For those of us who grew up in a nation with a developed Interstate highway system, our most frequent complaints are about potholes or traffic congestion. However, the Tour is much older than the Interstates … the roads that existed in 1910 were usually somewhere on the spectrum ranging from dirt road to buggy trails.

“Part of the problem in convincing people that automobiles were reliable was that there were no good roads at that time,” Lytle said. “The roads were awful; railroads were actually smoother.”

The tour ended in 1913. From 1914 to 1945, there was no Glidden Tour, but Harvey Firestone and Henry Ford revived it in 1946 at the urging of James Melton, a singer who was very popular in the pre-WWII era. The revival corresponded with the 50th anniversary of the automobile. The tour has run every year since it was revived, but it seldom gets west of the Mississippi River.

Joanna Cooper is a Tulsa resident who has been participating in the tour since 1998. She is also
the past president of the Antique Auto Club of America – one of the host organizations – an elected position she held for three consecutive three-year terms. (The Tour is hosted in alternate years by the AACA and the Veterans Motor Car Club of America. This is an AACA year.)

“When I was president, I had to remind people that we do have regions on this side of the Mississippi,” Cooper laughs.

“The trailer queens are totally restored; they are driven briefly for show and then trailered,” she said. “I prefer drivers.”

Cooper will have two cars in the Tour, one of which is a 1930 Model A. Before he passed away, she and her husband amassed a collection of 25 antique cars. This year, she has friends flying in to drive one car, and she and her daughter will be in the second.

The cars are surprisingly durable – perhaps a nod to an age before planned obsolescence. Lytle said Joe and Betty Swann, two Tour participants, left East Pennsylvania on May 29 in their 1912 EMF touring car. They intend to circumnavigate the U.S. this summer.

That a 103-year-old car is actually capable of touring the entire U.S. is remarkable. That it must be done at speeds below 40 mph, more so.

The Swanns, Cooper and Lytle – in his 1929 Model A 4-door touring car – will all be at the Automobile Alley event, as will Steve and Blanche Gordon, a couple participating in their 49th Tour. At every lunch stop and during the downtown event, visitors will be allowed to vote on a People’s Choice Award recipient. Votes cost $2, with proceeds going to support the Oklahoma Literacy Coalition, a 501(c)3 organization with many community-based literacy programs around the state.

At the end of the Tour, the winner will receive the Glidden Trophy. It goes to the car with the most average drive time as logged on time cards that all participants fill out daily. The system is an unusual one, but Lytle said participants have embraced the system. The Glidden Tour is no longer an endurance test, after all. One hundred and five years after their last visit on the Tour, automobiles are woven deeply into the daily needs of most Americans.