On the Trail of Bonnie and Clyde - 405 Magazine 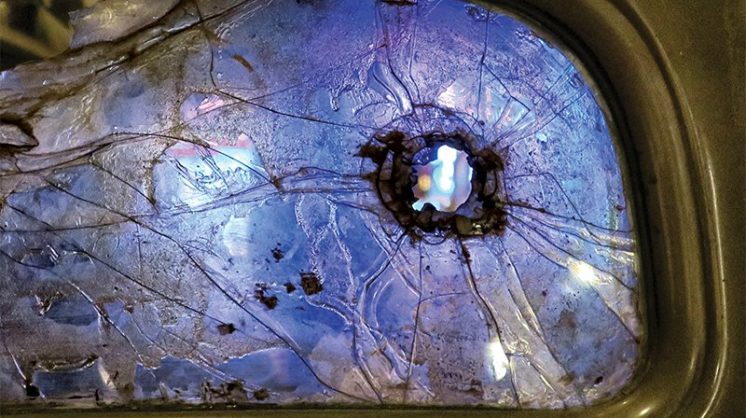 The most famous death car in America sits under plexiglass in a smoky corner of a tired casino on the California-Nevada border, 2,500 pounds of bullet-riddled automotive muscle infused with sex, violence, hysteria, celebrity and lawlessness: the Death Car of Bonnie and Clyde.

The Ford Deluxe V-8 rolled off the assembly line in February 1934, making its way from Michigan’s River Rouge assembly line to a dealership in Kansas, where it was purchased for $785.92 in March 1934 by Jesse and Ruth Warren of Topeka. In the first six weeks the Warrens owned the car, they drove it slowly to break it in, putting 1,243 miles on the odometer. On the last Sunday in April, Mrs. Warren parked the car in their driveway and left the keys in the ignition. When she next looked out the window, it was gone.

She reported the car stolen. It was spotted the next day on the side of the road near Ottawa, Kansas, heading toward Oklahoma. By the time police arrived at the scene, all that was left were the tracks of new tires and discarded cigarette butts.

The car reappeared 25 days later, on Highway 151 near Gibland, Louisiana. It bore an additional 7,500 miles on the odometer, more than 160 bullet holes and the dead bodies of the most infamous outlaw couple in American history: Bonnie Parker, 23, and Clyde Barrow, 25.

In an era of Pretty Boy Floyd, Ma Barker, Machine Gun Kelly and John Dillinger, Texas-born Bonnie and Clyde captured America’s imagination. From the depths of the Dust Bowl and the Great Depression, they showed that sometimes — at least for a little while — people might get ahead by breaking the rules. They were young, good-looking and in love. The cops couldn’t catch them. They lived life on their own terms.

Their legend grew thanks to an undeveloped roll of film left behind after they fled a garage apartment hideout in Joplin in the midst of a shootout. On April 15, 1933, the photographs were developed and sent out on the newswire: The nattily dressed duo were hamming it up, reveling in their gangster life, posing with guns by one of their stolen cars, with Bonnie chomping on a cigar and Clyde lifting her aloft.

With the film were poems written by Bonnie. Her The Story of Bonnie and Clyde concludes:

They don’t think they’re too tough or desperate,
They know that the law always wins;
They’ve been shot at before,
But they do not ignore
That death is the wages of sin.

Some day they’ll go down together;
And they’ll bury them side by side;
To few it’ll be grief
To the law a relief
But it’s death for Bonnie and Clyde.

The Bonnie and Clyde who starred in the newsreels shown before feature films starring fictionalized bad guys Edward G. Robinson and James Cagney became folk heroes to many.

“They always dressed perfectly, wielding guns in a deadly manner, cooly evading capture against all odds,” former speaker of the U.S. House of Representatives Jim Wright recalled as he remembered his childhood in Oklahoma and Texas. “It was a very romantic existence we felt they must enjoy. And even if you did not approve of them, you still would have to envy them a little, to be so good-looking and rich and happy.” 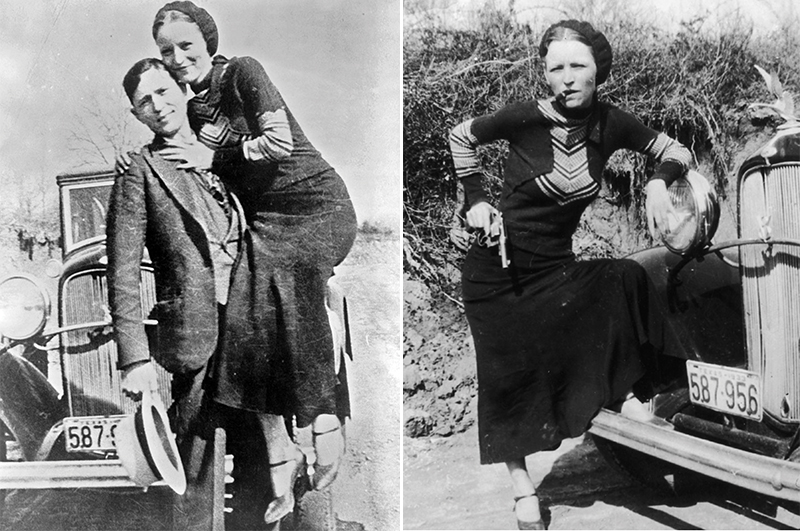 In reality, the gang lived hand-to-mouth, robbing fewer than 15 banks in the course of two years, sometimes hitting the same one more than once, with takes as low as $80. Clyde and his associates mostly hit out-of-the-way grocery stores and gas stations, stealing cars and bonding them, sometimes even shaking down vending machines for food money.

The duo was both demonized and celebrated. Author Jeff Guinn, looking back from the 75th anniversary of the rise of their celebrity, explained: “True, they robbed banks and shot it out with lawmen, killing some in the process. But in 1933, bankers and law enforcement officials, widely perceived to have no sympathy for decent people impoverished through no fault of their own, were considered the enemy by many Americans. For them, Clyde and Bonnie’s criminal acts offer a vicarious sense of revenge. Somebody was sticking it to the rich and powerful.”

On July 7, 1933, the gang broke into the National Guard Armory in Enid, Oklahoma, and stole five Browning automatic rifles, 46 Colt .45 automatics and 10,000 rounds of ammunition. Armed to the teeth, Clyde sawed off some of the barrels and stocks, and had three 20-shot clips welded together to create a 60-shot “banana clip” for what he called his “scattergun.”

As their firepower and list of their victims grew, the public that had adored their exploits began to have second thoughts. The last straw for many was the 1934 Easter Sunday murder of two motorcycle cops near Grapevine, Texas. One of the gang members killed patrolman E.B. Wheeler, and a panicked Clyde then felt obliged to fire on the second officer, H.D. Murphy.

It was Murphy’s first day on the job. He was two weeks away from his wedding. His grief-stricken fiancée wore her wedding gown to the funeral.

Suddenly, public opinion turned against them. The formerly dashing outlaws came to be seen as cruel and cold-blooded.

The gang fled from Grapevine up through Oklahoma, and machine-gunned Constable Cal Campbell of Commerce five days later, triggering a multi-state manhunt. Enraged Oklahoma law enforcement turned out in force, joined by officers from Kansas, Missouri and Arkansas. The front page of the April 6, 1934, editions of The Oklahoman reported: “Convinced that Clyde Barrow, fugitive killer, and his companions will seek to ‘back track’ into Ottawa County under cover of darkness, scores of officers guarded highways and bridge heads near here Friday night. From four states came operatives of the federal department of justice.”

A posse led by Texas Rangers tracked the gang for 15,000 miles, relying on tips and hunches in an era before police radios and federal law enforcement.

The posse finally caught up with them on May 23, 1934, as Bonnie and Clyde drove down a back road in Louisiana to meet an old gang member, who had betrayed their location.

The next day’s front page of The Oklahoman announced that “Barrow, Slow on Draw, Dies with Girl Pal,” noting “Fifty bullets from the guns of old-time Texas rangers and country sheriffs Wednesday ended the murderous career of Clyde Barrow and his savage gun-woman, Bonnie Parker … The officers gave the bandits the same medicine they had meted out to their victims in more than a dozen fitters and raids against the law in which 12 men were killed. In many of the fights, Bonnie Parker stood side by side with her outlaw associate and shot it out with the officers, each time successfully until today.”

When word spread of the outlaws’ demise, onlookers flocked to the site of the ambush. Bonnie’s purse was stolen, and a woman with scissors cut off pieces of Bonnie’s dress and her blood-soaked hair, to sell as souvenirs. Officers guarding the scene were overcome by the crowd, and historian E.R. Milner notes that the coroner worried that “nearly everyone had begun collecting souvenirs such as shell casings, slivers of glass from the shattered car windows and bloody pieces of clothing from the garments of Bonnie and Clyde. One eager man had opened his pocket knife, and was reaching into the car to cut off Clyde’s left ear.”

The car and the bullet-riddled bodies within were towed to the town of Arcadia, Louisiana which swelled in size from 2,000 to 12,000 within hours. Movie magazines were found at Bonnie’s feet, and Clyde’s saxophone and sheet music were stashed in the trunk with an arsenal of weapons.

The death car was padlocked into a garage for safekeeping and, when the curious crowd nearly pulled off the building’s doors to be able to view it, was moved to an area with a tall chain-link fence. The families of Bonnie and Clyde claimed their bodies, and the Parkers insisted that Bonnie would not be buried beside Clyde. Today, they rest in separate Dallas cemeteries, under sim-ple gravestones.

As the headlines telling of their rise-and-fall yellow and fade, one relic of the heyday of Bonnie and Clyde remains.

After years of changing hands, most recently for $250,000 in 1988; after years of traveling to sideshows and state fairs; after years of promoters shooting up the driver’s side of 1934 Ford V-8 Deluxes to claim that theirs is the real Bonnie and Clyde car; the most famous death car in America remains encased in plexiglass in a smoky corner of Whiskey Pete’s casino in Primm, Nevada. It’s guarded by two gun-toting mannequins near the front of the official Bonnie and Clyde Death Car gift shop, selling hats, beer mugs, T-shirts and keychains for your very own life of crime.

“We Just Shot the Devil Out of Them”

The posse that ambushed Bonnie and Clyde at 9:15 a.m. May 23, 1934, comprised six lawmen, two from Louisiana and four from Texas, who lay in wait after receiving a tip from the father of one of their former gang members. In the publicity that followed, at least two different versions of the trap were put forth:

“Each of us six officers had a shotgun and an automatic rifle and pistols. We opened fire with the automatic rifles. They were emptied before the car got even with us. Then we used shotguns … There was smoke coming from the car, and it looked like it was on fire. After shooting the shotguns, we emptied the pistols at the car, which had passed us and ran into a ditch about 50 yards on down the road. It almost turned over. We kept shooting at the car even after it stopped. We weren’t taking any chances.” – Ted Hinton, Dallas County Deputy Sheriff

“We just shot the devil out of them. That’s all. That’s all there was to it. We just laid a trap for them. A steel trap. You know. Bessemer steel, like gun barrels are made of … They both reached for their guns, but were kind of slow. Seemed like they must have had cramps or something. They were just too slow.” – Frank Hamer, Texas Ranger 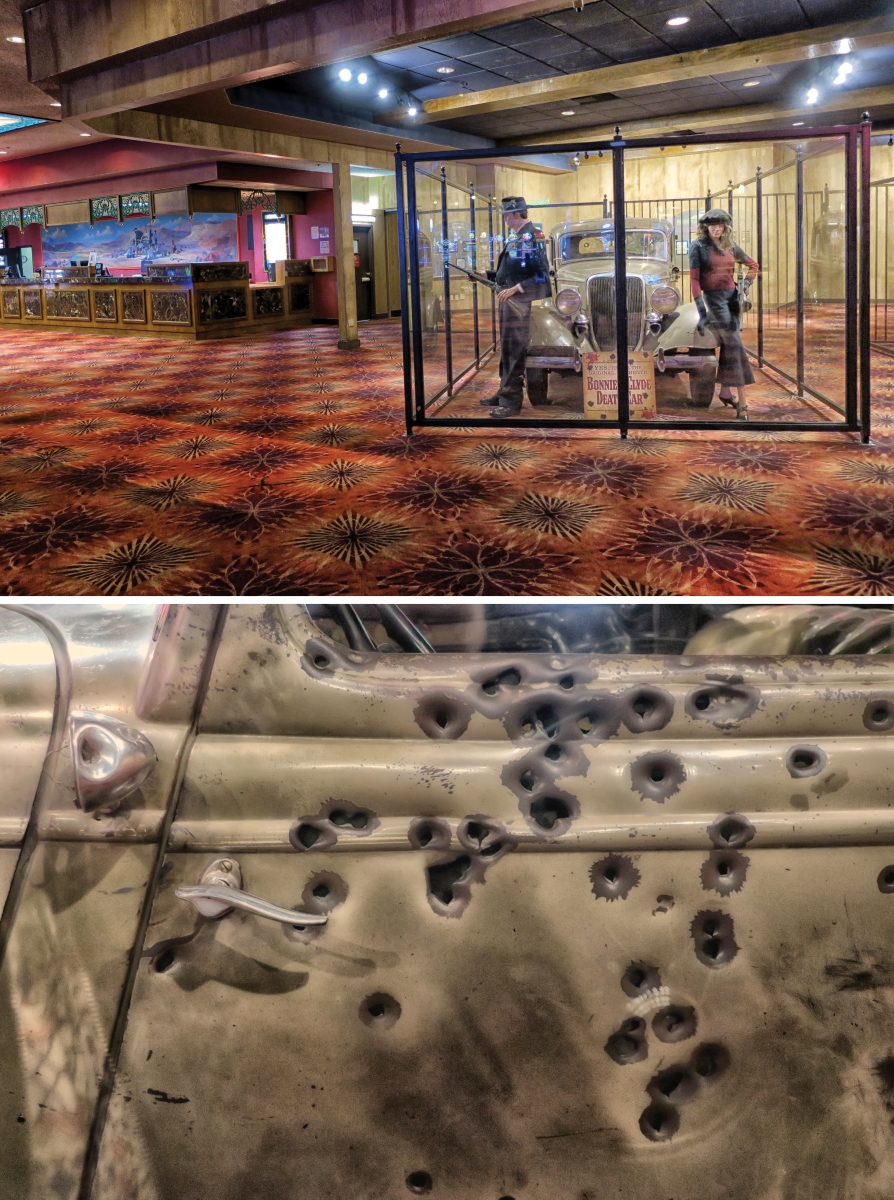 Killed by the Barrow Gang

Of the 13 killings attributed to the Barrow gang, nine were of lawmen. The first and last were felled in Oklahoma.

Atoka County Deputy Eugene Moore was gunned down in Stringtown on Aug. 5, 1932, when he and Sheriff Charley Maxwell approached a car outside the dancehall, where a bottle of moonshine was being passed around. Maxwell took seven bullets, but survived. Moore was killed by a single bullet from a .30 caliber Stevens automatic rifle. The 30-year-old father of three was one of 12 children of Lemuel Capel Moore, a legislator of the Chickasaw Nation.

The 13th and last known killing by the gang came on April 6, 1934, when Ottawa County Constable Cal Campbell was shot in the heart outside Commerce, when he and Police Chief Percy Boyd investigated a car that had been stuck in the mud. The 63-year-old Campbell died instantly; Boyd, who survived being shot in the head, was taken hostage and released in Kansas after being told by Bonnie that the photographs of her posing with the cigar were meant as a private joke, and that she disliked being called a “cigar-smoking gun moll.” She asked Boyd to tell the public that she only smoked cigarettes, and declared “nice girls don’t smoke cigars.”