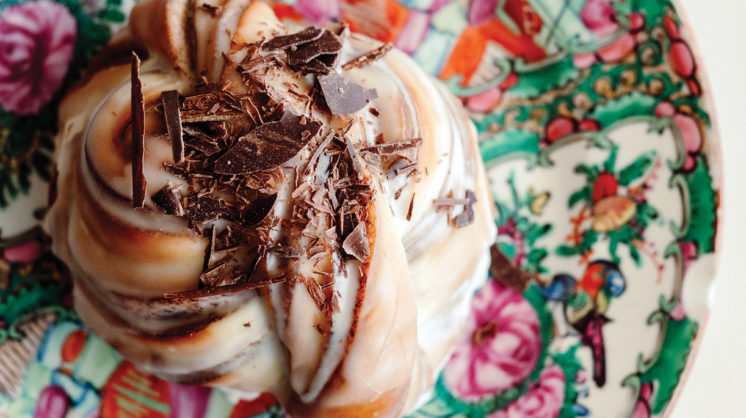 The modern babka, as exemplified by Trisha O’Donoghue’s chocolate version at Quincy Bake Shop, is a massive improvement over the 19th century invention of Jewish mothers and grandmothers in Europe. Those babkas were often just leftover challah dough, a bread mostly notable because it contains no butter, and the originals were likely smeared with jam or other sweets, rolled up and baked.

Over time, that simple treat turned into the braided loaf made famous by Jerry Seinfeld in a 1994 episode of the eponymous NBC sitcom. In fact, more than a few food historians credit that episode — in which Jerry settles for a cinnamon babka rather than chocolate and is relentlessly mocked by Elaine (Julia Louis-Dreyfus) for his choice of the “lesser babka” — as the reason babka has reached such a level of cultural familiarity.

The only reason it really had a chance to rise to that level of notoriety, though, was the eventual inclusion of butter. The original version was typically made with palm oil, so the finished product would be thin and flaky, bordering on too dry every time. The addition of butter brought the bread closer to brioche and dramatically increased its richness, which was then aided by chocolate — a tweak from the mid-20th century.

When O’Donoghue attended culinary school in Chicago, she encountered babka for the first time, but Chicago has no tradition of the braided loaf form. “They had rolls instead of loaves,” O’Donoghue said. “Since Oklahoma City didn’t really have a lot of experience with babka, I decided to go with the roll.”

Her roll is a combination of the same technique used to make Scandinavian cardamom buns — a complex overlapping of strips of dough to mimic braiding — with the addition of butter and chocolate. It’s a thoroughly modern rendition, with important ties to the traditional roll. To facilitate quicker cooking, many home cooks would slice the loaf before baking, making a more simplified form of the pastry but with beautiful swirls of color and spice in the finished product.

“I like the braid in the loaf, so I decided to do a roll form that replicated that effect,” O’Donoghue said. “The cardamom roll was a perfect template.”

O’Donoghue said that Quincy will be following another modern trajectory with its babkas. Beginning in the early ’00s, modern Jewish bakeries — those that started popping up in the ’80s and ’90s on both coasts — started experimenting with different ingredients beyond the traditional cinnamon and chocolate. Quincy will have a peppermint version for the winter holidays, hazelnut, chocolate-orange and other variations. For now, it’s easy to find O’Donoghue’s delicious chocolate babkas daily at 1235 NW 38th St. inside the Bradford House Hotel