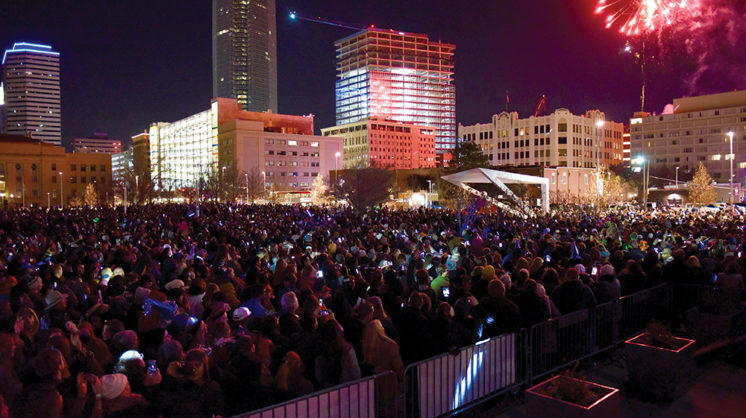 Tick … tick … tick … that’s the sound of time running out on 2018, and OKC is getting ready to kick off the new year with a boom. Music, magic, live entertainment, fancy beverages for adults and a truly colossal fireworks display are waiting in the wings as we approach Opening Night.

Think of it as a casual get-together in which tens of thousands of people fill Bicentennial Park and the surrounding streets to laugh, listen and be merry from 7 p.m. until midnight. The Finale 5k is open to runners of all skill levels, followed by performances on nine stages from The Allie Lauren Project, Edgar Cruz, Orquesta D’Calle and more. Children’s area? You bet. Photo booth? Yes, indeed. A magic show by Joe Coover, off-the-cuff comedy from OKC Improv and a Broadway revue from Lyric Theatre are in the cards, as well – and starting at 9 p.m., headliners Take Cover will begin rocking out to some retro tunes in a crowd-moving countdown to the magic moment.

By the way, this year’s festivities will for the first time include the New Year’s Cheers beverage area, serving up wine, beer and champagne in a heated tent so guests of a sufficient age can pop in for a quick one while traveling between event venues. Slainte!

As the final seconds of 2018 slip away, all eyes will turn to the Opening Night ball, all set to rise to the sky and trigger one of the state’s largest fireworks shows to celebrate a fresh calendar.

A wristband gets you access to the whole shebang (the 5k and adult libations are extra, of course) – for locations, pricing and more information, visit artscouncilokc.com, and get ready to greet the future.