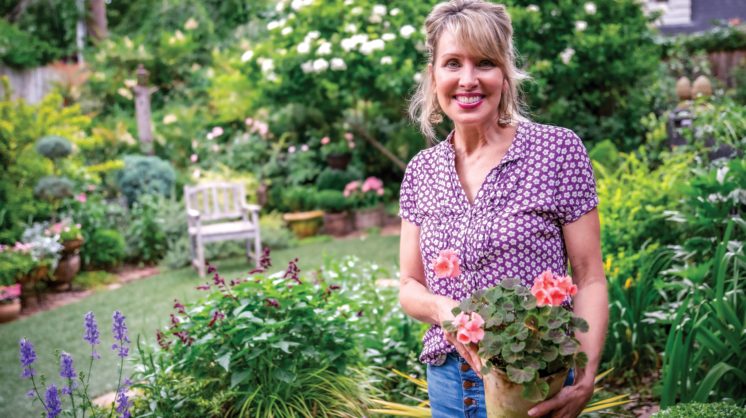 “I try to be an evangelist for a garden-centric, outdoor focused lifestyle in Oklahoma,” says Oklahoma garden guru Linda Vater. As the verdigris dream-scape that is her Crown Heights backyard unravels before me like chapter one of a fairytale, one thing is certain: When it comes to being “garden-centric,” Linda Vater doesn’t just try. She breaks the mold. Vater humbly identifies as a garden writer and designer, but she is far more than that. Using various media –from news spots on KFOR and spreads in Southern Living to her website lindavater.com and Instagram feed (@potagerblog), where she reaches more than 60,000 followers daily with helpful and inspiring videos and photography – Vater is a pioneer when it comes to backyard beautification.

When Vater bought her Crown Heights home, the backyard consisted of little more than scruffy grass and a redbud tree that could have benefited from a handful of “Peanuts” characters surrounding it and singing a tune. Where most would have seen sparsity, Vater saw potential. “Landscapes are now expected to be productive as well as ornamental,” she says. “Experiential, not just visual. Lower maintenance. More personal and about outdoor living, not just gardening.”

Personal outdoor living sounds good to us – and whether or not you have a green thumb, the space behind your home should be ground central for enjoying yourself this summer. So we put together a few suggestions, from gardening to grilling, for making the most out of your own little section of the great outdoors.

Vater’s backyard is, as she said, about living. She blurs the lines between indoor and outdoor living spaces and rather than just an open “yard” plan, each section of her yard feels like its own secret garden. “I want my yard to feel like it has multiple rooms,” says Vater, and this yard does. A dining area, multiple seating areas and an edible garden are all worthy spots to sit down with your favorite book or to simply take a load off and smell the … everything. Vater believes that outdoor entertaining is best enhanced by embellishments such as string lighting, fire pits, water features, cut flower gardens and outdoor kitchens. 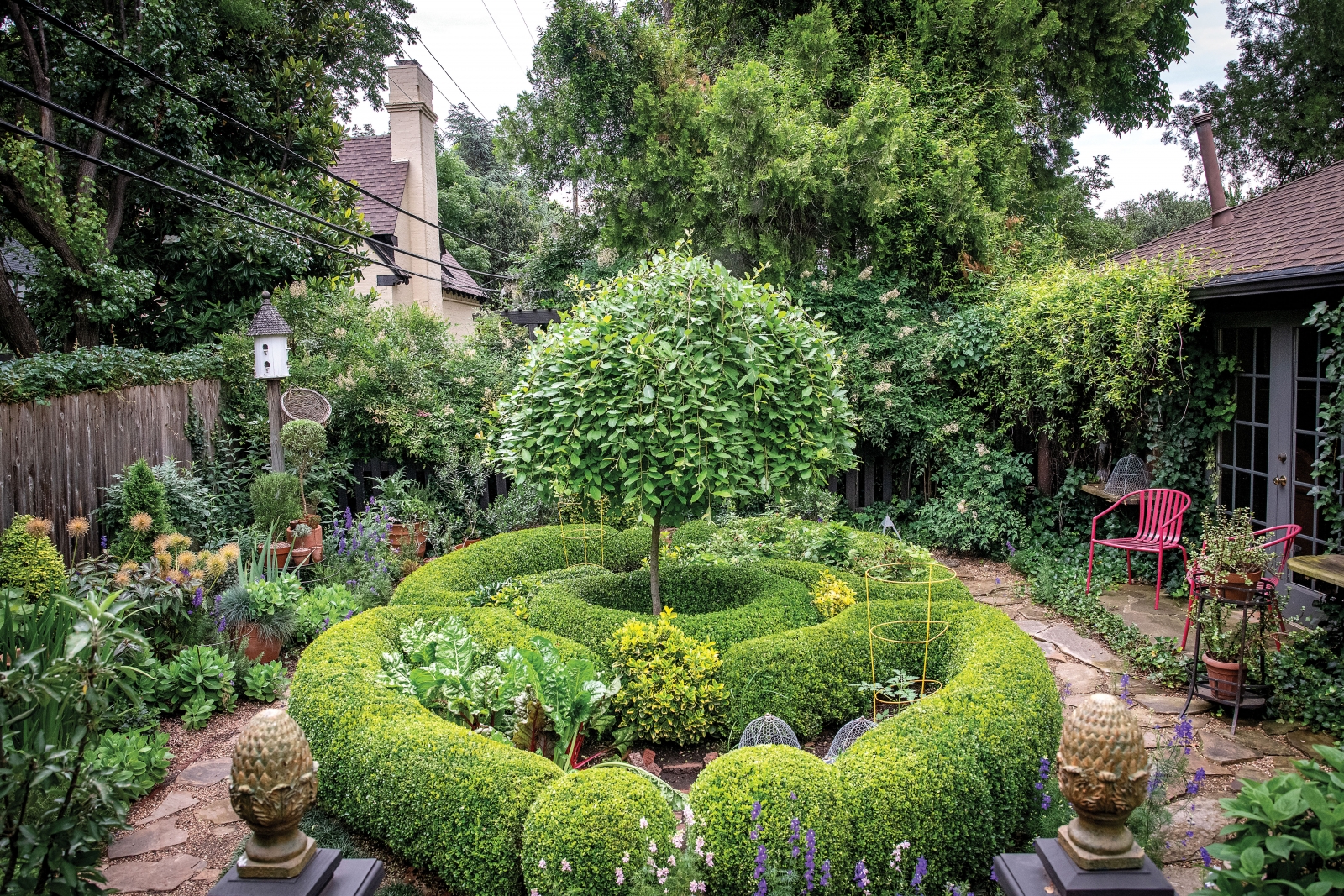 Not only does she have an eye for gardening, Vater sees the value and importance in making sure that you have a back yard that speaks to you. “As we become more and more tech dependent, interfacing and experiencing and communicating with the outdoors is more important than ever,” she says. “For our mental health, for leaving a legacy for future generations, for educating ourselves about how nature works and how we influence it, for enhancing our daily lives and creating beauty in our worlds.” 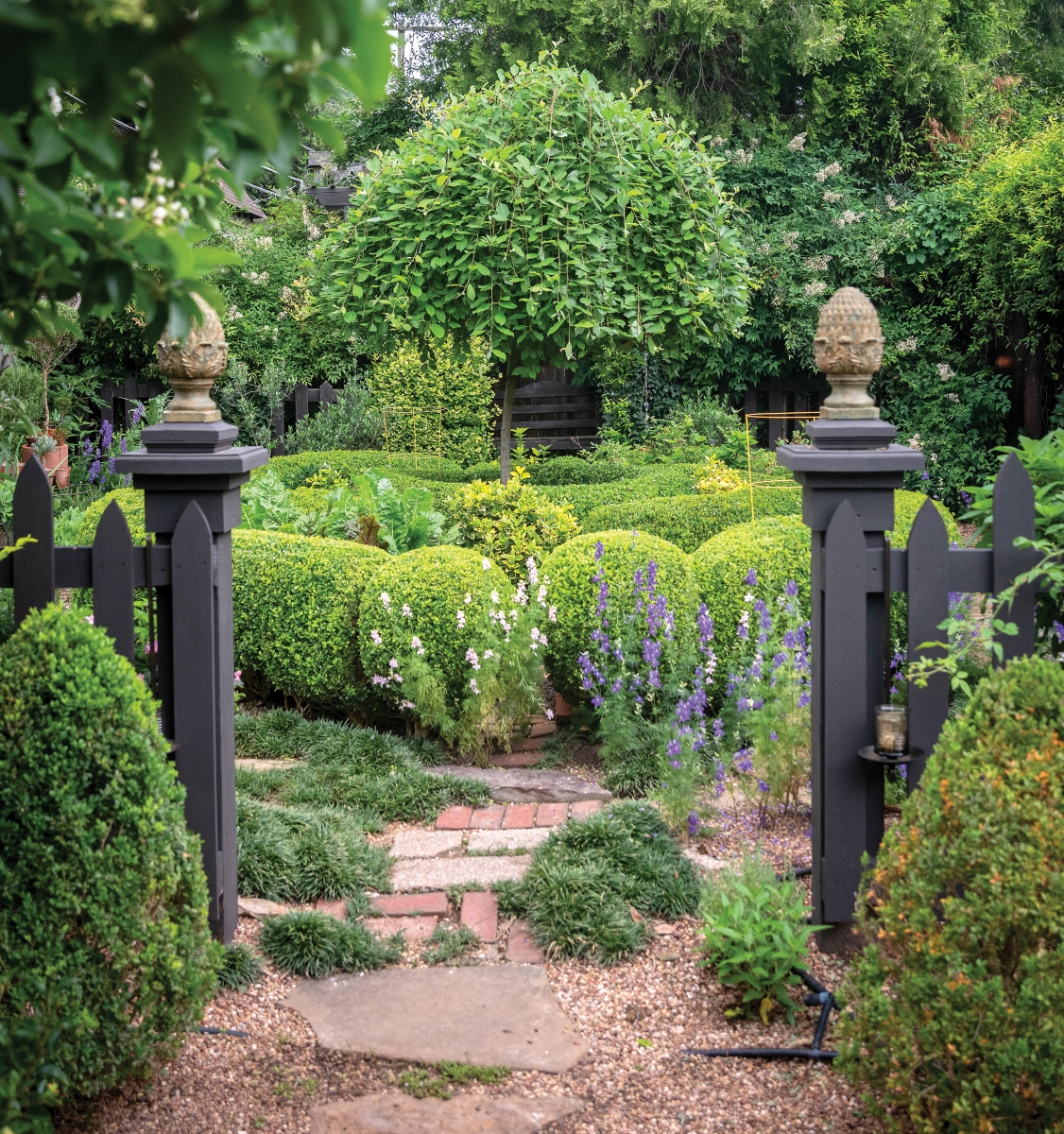 Vater also puts an emphasis on organic, sustainable, earth-friendly gardening that reuses, recycles and repurposes in order to minimize waste. “Small space gardening leaves a smaller carbon footprint overall,” says Vater. She said that one way to do this is using turf and gravel instead of grass – a sentiment with which Brendan and Carrie Parker of Oklahoma City’s Always Greener agree. The Parkers started installing turf backyards in 2011, and were lucky to do a backyard a month when they started. Since then, though, turf as an alternative to grass has exploded in popularity. In 2018, Always Greener did 64 yards and large spaces, including playgrounds, putting clocks and common areas – and their business continues to thrive. And while “turf” is their business, it’s what people do around the turf that really gets exciting. “It’s becoming very common practice to keep things a bit more minimal when it comes to gardening and backyards,” says Brendan Parker. “For example, alongside our work we’ve seen some incredible implementation of gravel, rock, cactus and succulents that create a very appealing aesthetic.”

According to the EPA, the average American family used 320 gallons of water daily, with a third of that going to “outdoor usage.” Of that percentage, more than half is used to water lawns and plants. Basically, Americans use 50 gallons of water a day on lawns and ornamental plants. Landscape and yard design companies such as Tim Lloyd’s Echelawn are experimenting with better ways to address yards, including with grassless yards and indigenous plants.

“We have combination gardens and beds at our house,” Lloyd says. “We mix ornamental with edible, and the plants work together. Since they’re mostly indigenous, they require less water than many ornamental plants.” 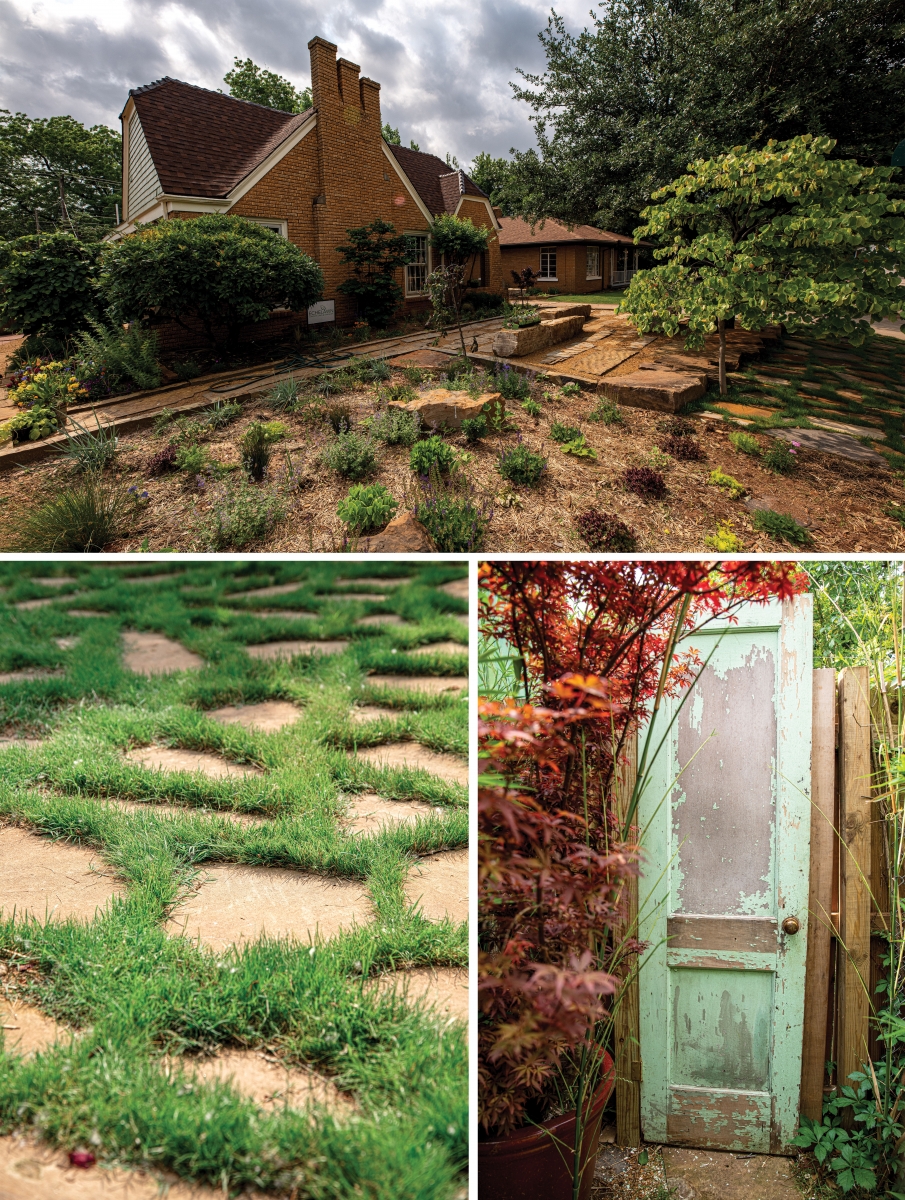 That includes popular trees such as the Chinese maple, which are notorious water hogs. Instead, Lloyd recommended native redbuds, which are also beautiful, and he plants fruit trees that grow well in Oklahoma: peach, apple, plum and apricot. He’s even planted fig trees, which aren’t indigenous but are hardy.

“The trick in Oklahoma is getting the non-indigenous varieties to survive the first two to three years,” he says. “If they get through that, they have a chance.”

As for the mixed gardens, there is one caveat: “Be careful about your plant mix. You don’t want your kids foraging next to poisonous plants.”

Lloyd said the company is seeing an increased interest in grassless lawns, too. Mowing in the Oklahoma heat is miserable, and with water conservation growing in importance, Oklahomans are looking at stone, rocks, crushed granite and other options for creating yards. At her SoSA home, Lea Morgan dedicated half the yard to replicating an outdoor landscape from her childhood home near Black Mesa: rocks, sand plum bushes, wildflowers and prairie grasses have a wild, British garden feel, if British gardens were designed in the Panhandle. 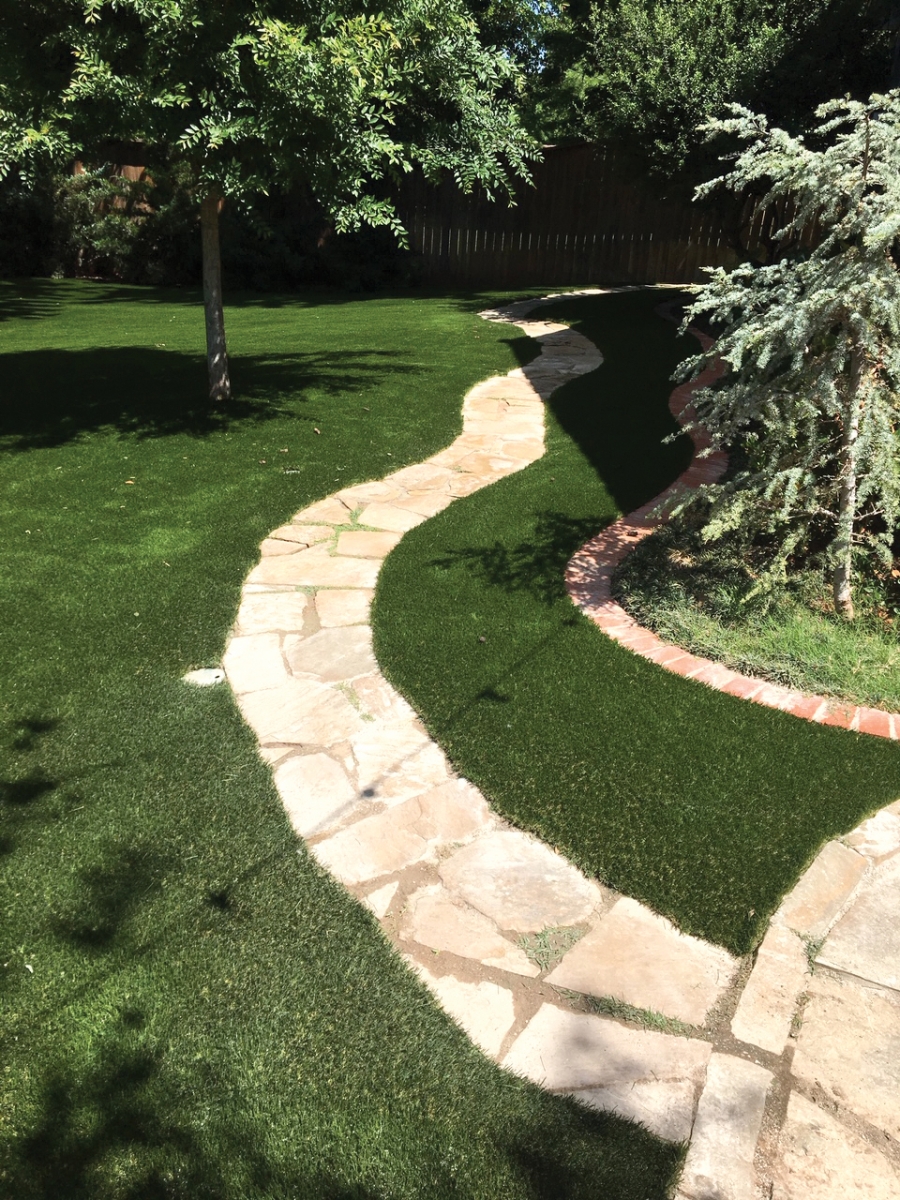 Using raised beds in a backyard can make gardening accessible to more people. Echelawn makes “starter kits” for raised beds, and Lloyd said the advantages include accessibility for people with age-related issues or back problems who still love gardening.

“You can basically raise the beds high enough that no one needs to bend over or kneel to tend the beds,” Lloyd says. “There is, of course, more cost incurred with more soil, but it’s very doable for people who love to garden.”

Echelawn sells cedar beds in a range of sizes, and Lloyd said the wood is an excellent choice because it’s naturally rot-resistant and it looks beautiful. “The most important consideration is not using treated wood,” he says. “Those chemicals can leach into the soil, and you don’t want your family exposed to some of the chemicals they use for treating wood.” 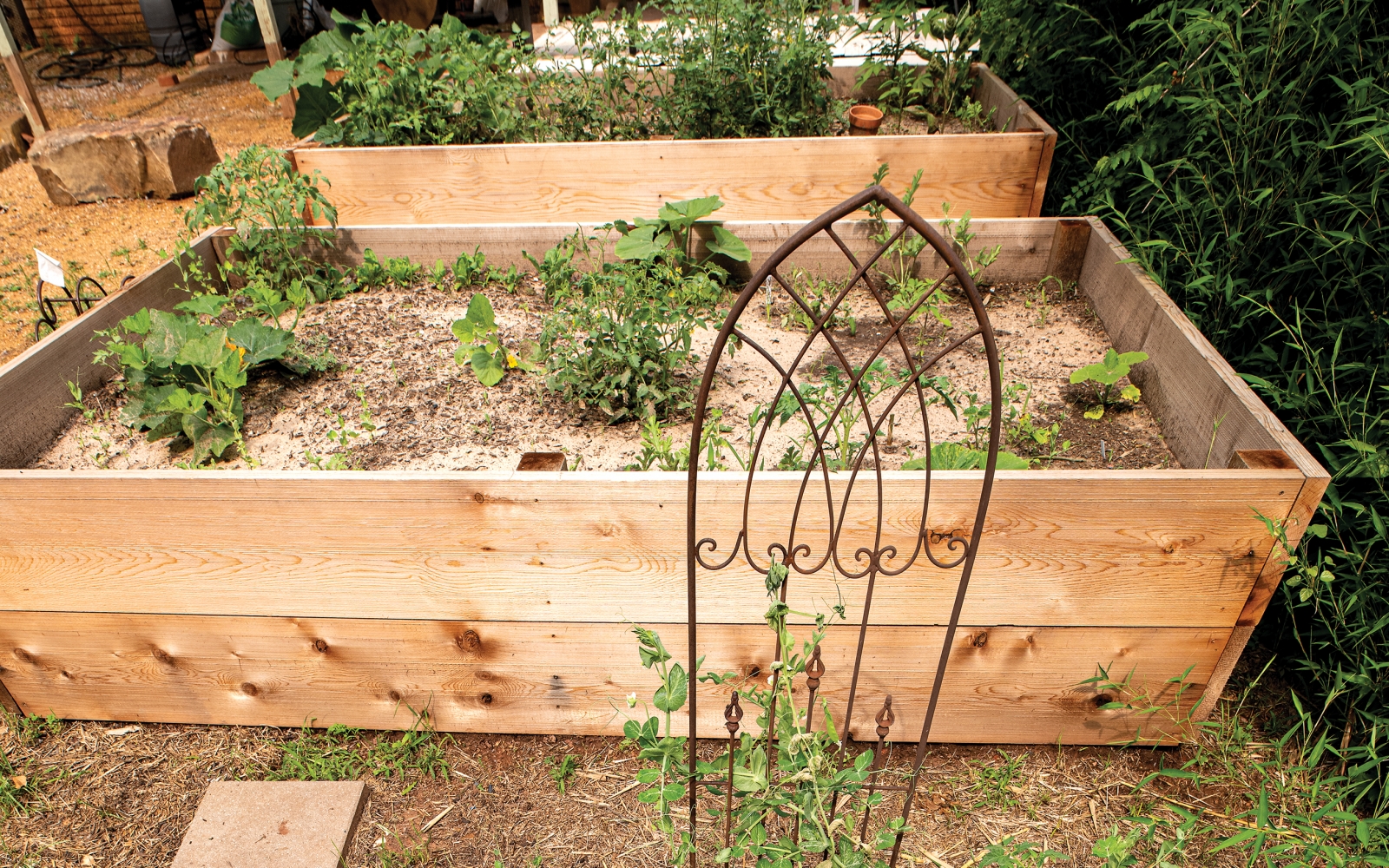 In addition to physical benefits, raised beds also make it possible to simply place a tarp over the box seasonally, or even to take a break from gardening for a while. Ground-based weeds and grasses such as Bermuda don’t thrive in boxes, either, and boxes can help prevent plant damage due to snails and slugs, as well.

“Moles will find a way in, though,” Lloyd says ruefully. “You can use chicken wire at the base of the soil, but they still seem to get in.”

Lloyd recommended buying rich mix compost from Fertile Grounds or rich mix soil from Murphy Products in Stockyards City. Buying good soil from one of these companies, he says, highlights the other benefit to raised beds: “You don’t have to till the ground, ever.”

A shortcut to grilling greatness 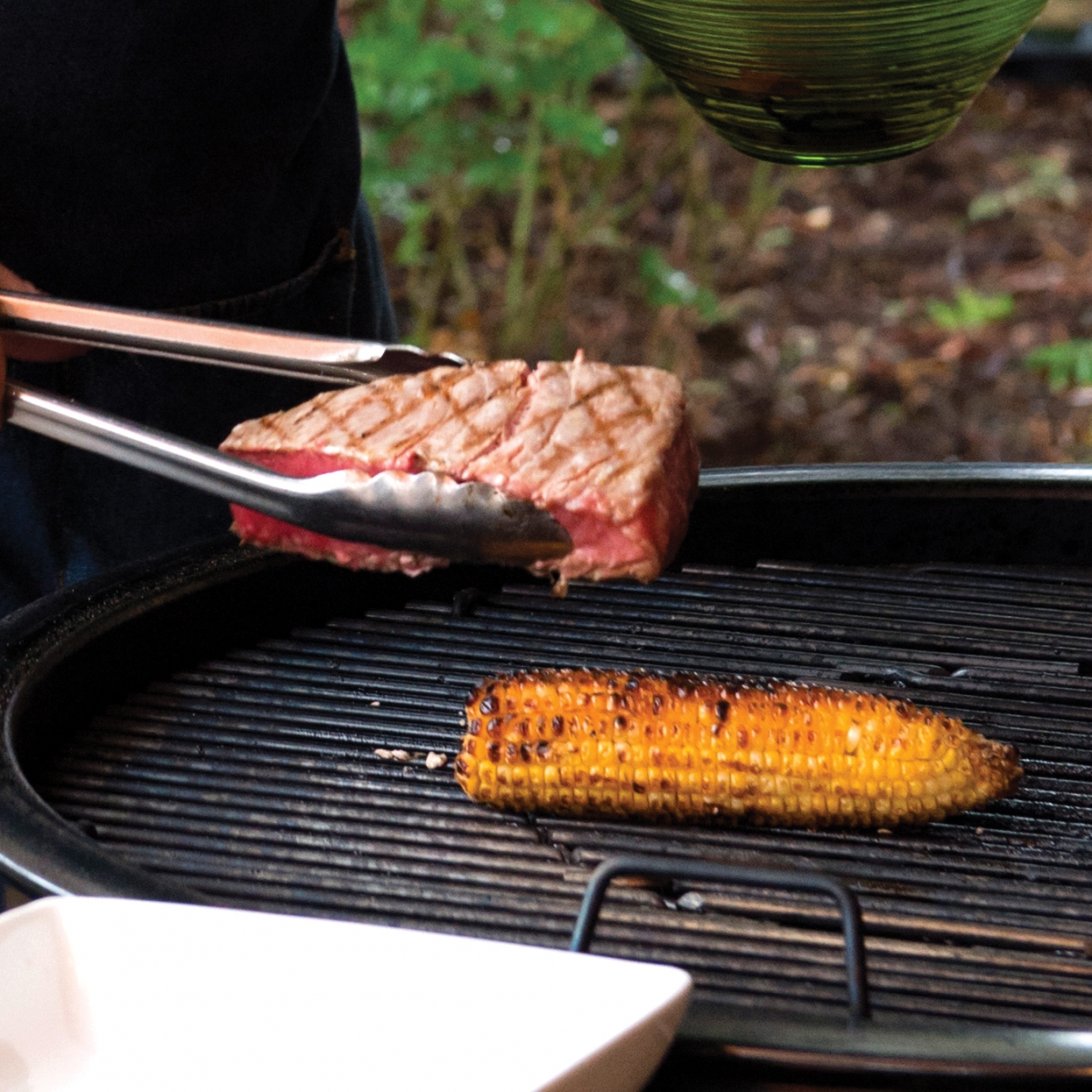 For a delicious, easy beverage to serve guests in the summer heat, we asked Colby Poulin and Chris Barrett of Clockwork Pour to give us a recipe. 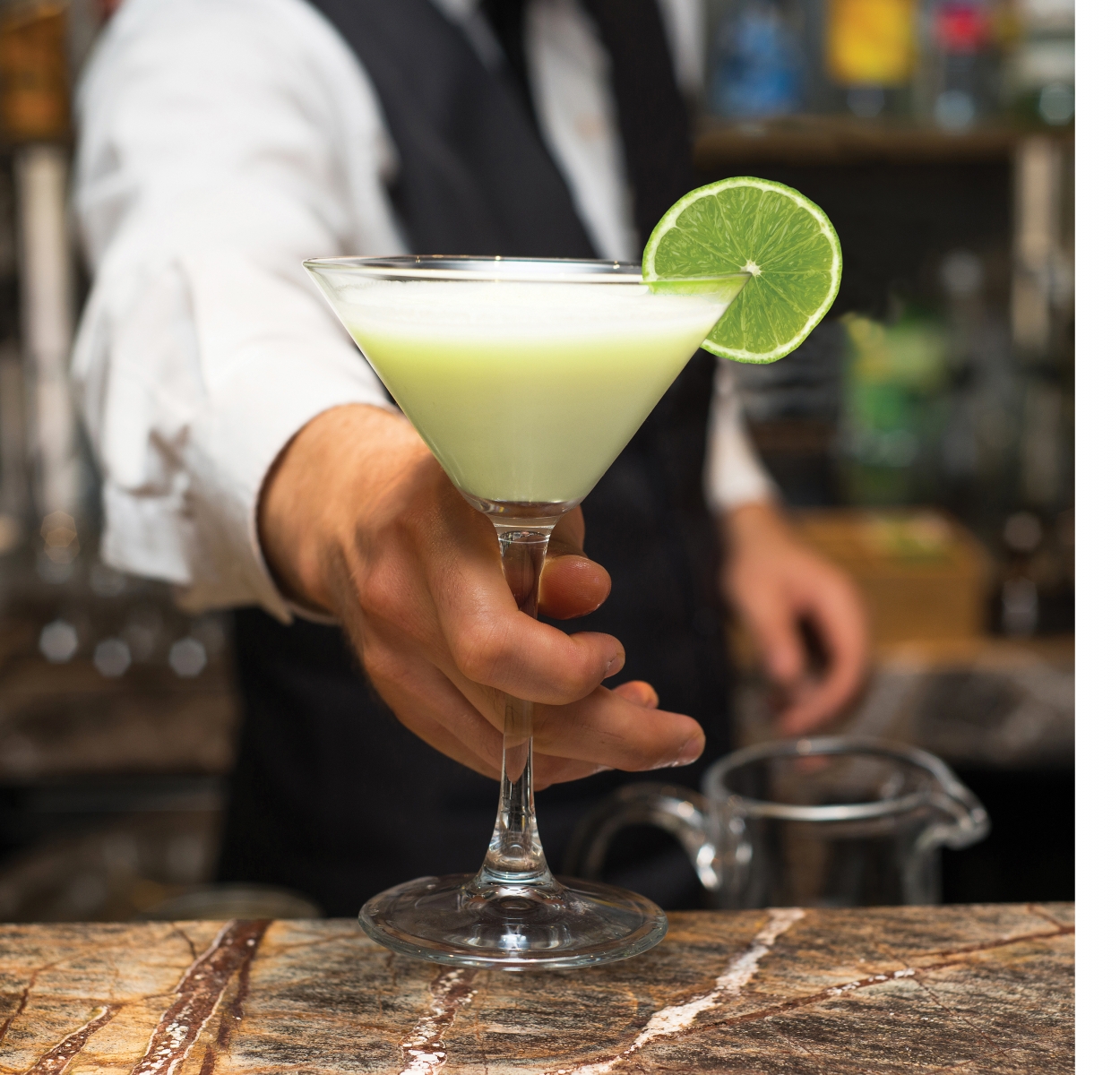