Over the River & Through the Woods - 405 Magazine 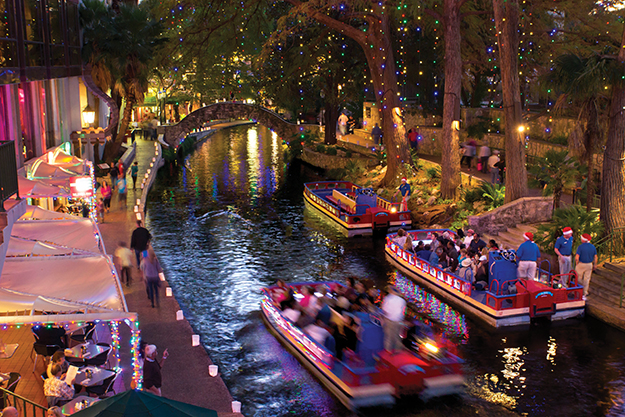 A Texas Town With Spanish Accent

San Antonio at Christmas is a magical place. The River Walk sparkles with colored lights and glows with the soft illumination of luminarias. Some say the small paper bags weighted with sand and holding candles originate from the custom of lighting small bonfires along the path to guide worshipers to midnight mass on Christmas Eve. Others attribute the paper sacks to the enchantment of Spanish traders by Chinese lanterns. Whatever the origin, luminarias are a delightful part of San Antonio’s Christmas observances.

Native Americans were here first but Spanish exploration changed everything. By 1718 the first of five missions in the area was founded (San Antonio de Valero, now known as the Alamo). Spain reigned until Mexican independence was won in 1821. Texas became independent of Mexico in 1836 and was admitted to the Union in 1845.

Hispanic culture had over a century to take root in San Antonio soil and still has a strong influence on the city. Nowhere is it more evident than on the Paseo del Rio, or River Walk. Though much of the Spanish flavor is more homage than actual heritage, the illusion is delightful.

Arched bridges take walkers from one side of the river to the other and colorful boats travel up and down the waterway. In December, boats of carolers serenade pedestrians. Over 200 trees dripping with strings of lights line the river and on weekends, 6,000 luminarias shine at water’s edge.

You can’t beat the ambiance at Mi Tierra Café Y Panaderia in the Market Square. Operated by members of the Cortez family for over seventy years, this open-24-hours eatery is a local favorite for great Mexican food. It’s always colorful with all sorts of Mexican decorations but really outdoes itself at Christmas. It’s like being inside a snow globe filled with glitter!

The market area is also a great place to shop for pottery, jewelry, piñatas, tiles, you name it. If it has a Spanish flair, it’s here.

Need more Mexican food? Aim for Saturday, December 7, for the Tamales! Holiday Festival in one of the city’s newer entertainment districts, Pearl.

This is the fourth year for the street festival which features tamales, entertainment and children’s activities. You’ll find everything from the expected – beef and pork in a masa covering to pumpkin and raisin tamales wrapped in banana leaves. The lines are long but the wait’s worth it.

Though you’ll hear music throughout the town the whole holiday season, the first week in December is truly special: December 1-7, is a week-long mariachi music festival. Over 1,000 musicians are in town performing, competing and attending workshops and jam sessions.

If you’re looking for a celebration with a South-of-the-border twist, nobody says “Feliz Navidad” better than San Antonio.

Fredricksburg is the ideal spot to celebrate Christmas with a German accent. The community was settled in the late 1840s by a group of German immigrants brought to Texas by the Adelsverein, a consortium of German noblemen hoping to establish a new Germany in Texas. The German language was still used in Fredericksburg schools into the early 1900s.

Today’s visitors still get a strong sense of the heritage through the architecture, food and customs maintained by Fredericksburgers. The historic district of town, like many German river towns, is strung out along Main Street rather than being built around a town square. The Marktplatz pays homage to the traditional German marketplace.

Major symbols of the season can be found in the Marktplatz. It’s hard to miss the 26-foot Christmas pyramid, a sort of layer-cake-carousel decorated with a variety of carved figures ranging from angels and the holy family to nutcrackers and snowmen. Small pyramids, which spin by using the heat generated from candles, originated in the Erzgebirge – the Ore Mountains area on the border of Germany and the Czech Republic. It is said to have been the precursor of the evergreen Christmas tree. The Fredericksburg pyramid, made in the Erzgebirge, is the largest in the United States.

A traditional tree trimmed with lights, stars and gingerbread men stands nearby, and at night all the trees in the park are wrapped in rainbows of color. An outdoor Eisbahn (ice skating rink) in the Marktplatz is open through the New Year’s holidays.

On Friday, December 6, the town holds its annual Light the Night Christmas Parade and After Glow. Booths sell everything from Christmas ornaments and items imported from Germany to local arts and crafts. Sausages and sauerkraut, beer and wine accompany more Texas-style treats. The day is capped with a lighted parade – check in advance for reserved bleacher seating.

Fredericksburg is well-prepared to host visitors with over 350 B&B and guest accommodations plus a number of popular chain motels. Among the more interesting choices are Sunday Houses, small in-town cottages built in town by early settlers whose farms were away from the settlement.
Newer accommodations have also been built in this style. Generally, there is no caretaker on the property, and while most have small kitchens, no food is provided.

But you won’t go hungry. There are several good spots for breakfast: the Rathskeller, Old German Bakery or Hill Country Donuts and Kolaches among them. Several restaurants specialize in German dishes. The only one I’ve tried was the Fredericksburg Brewing Company. The food was good and the beer’s a big draw (pun intended!).

While You’re Here:
•    Before you go, check www.visitfredericksburgtx.com
•    Take a walking tour of the historic district. Brochures are available
at the Visitor Information Center, 302 E. Austin.
•    Visit the Pioneer Museum Complex with authentic structures pr
served from the 19th century pioneers
•    National Museum of the Pacific War – okay, this doesn’t sound
Christmas-y, and it isn’t, but this museum, originally started in
honor of Fredericksburg native Fleet Admiral Chester W. Nimitz,
features a critical part of American history. An important part of
its mission is reconciliation – and that’s central to the season.
•    Stroll and shop. Fredericksburg has over 150 shops and galleries.
Benches on the sidewalks are always popular with non-shoppers
holding packages!