Pageantry and Poignance at the Fair - 405 Magazine 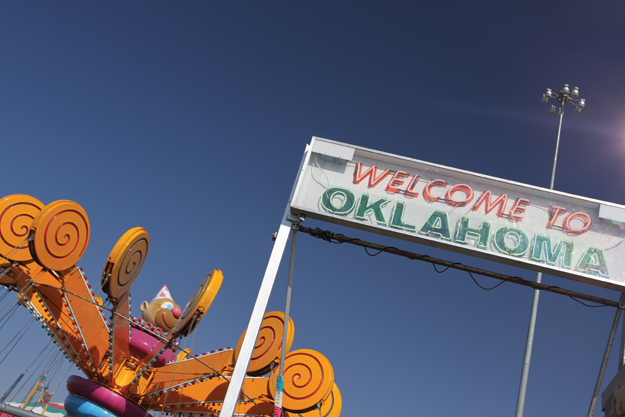 It’s an odd sign to see more than 100 miles from the nearest border. WELCOME TO OKLAHOMA. The neon, red and green, shimmers above the Gate 5 entrance off May Avenue, leading into State Fair Park. What awaits beyond is the Oklahoma State Fair, an 11-day Rorschach test that has been around longer than Oklahoma itself.

Whatever you think Oklahoma is, you can find it here. The fair’s 900,000 annual visitors pay as much as $9 each to walk in the gate. They ponder beribboned jars of jams and jellies. Rows of antique tractors. Old-souled 4-H kids wash and brush the animals they have raised since birth one last time before the moment of judging.

“These competitions mean a lot. You get it in your blood. It’s like smoking dope,” Kenneth Roberson said with a smile outside the 4-H livestock judging in the long barns. His extended family, including children and grandchildren, has competed at the fair throughout his 66-year farming career. “Everybody wants to win. These kids work 364 days a year for today.”

The pioneer outpost sits cheek-to-jowl with a fairground steeped in a mid-century modern groove, awaiting its 21st century makeover. The forward-looking “Arrows to Atoms” theme was embraced during the state’s 50th anniversary in 1957, when Oklahoma was determined to leave its Dust Bowl legacy behind and celebrate the technology of the future.

Time has not been kind to the fair’s tributes to progress. The iconic space tower no longer spirals the 330 feet to the height of its atom-and-arrow topped summit. The star-spangled monorail is no more. The B-52 Plaza and its bombers are gone.

And yet, tucked among the usual can be the breathtakingly moving. In a corner of the Cox Pavilion, a traveling exhibit honors Oklahomans killed in war zones since September 11, 2001. Dozens of young men and women are shown in uniform, focused and determined, and in family snapshots. No words are wasted: only the soldiers’ name, age, rank and branch of service. Their Oklahoma hometown. The date and place of death, and how it happened: helicopter crash, combat, IED. Friends, families and admirers post notes to the fallen. Spontaneous hand-written, heart-felt testaments to those who died for a cause, from those who love them: heartbroken yet proud parents, still-grieving spouses, fatherless children.

The tributes, however temporary, resonate long after leaving the building and trivialize the solemn memorial statues of men in suits dotting the grounds, casting retro Eastern Bloc silhouettes against the lurid canopies of food stalls selling roasted corn and iced lemonade and cotton candy in a bag instead of on a stick because, as a vendor whispered, a couple of years ago someone tripped while eating cotton candy and the stick lodged in his throat and putting it in a bag is safer.

If the fair no longer offers a glimpse of the dangerous, the exotic or the next big thing, it remains a karaoke-singing, turkey-leg eating, sideshow-peering, beer-chugging, pig-racing tradition that appears every fall like a hallucinogenic rumspringa.

That tradition has become its appeal, along with the possibility that those 11 days can be an annual stage for something else. Is it the dignified anticipation and solemn march of a dark-eyed Mexican toddler princess as she ascends the steps to the next Disney on Ice performance? The quiet joy of a shy 81-year-old woman battling dementia who lights up and softly sings along when the caped Elvis impersonator belts out “The Battle Hymn of the Republic”? The contentment of a teenage girl drifting dreamily hand-in-hand with her boyfriend as he proudly carries a new hard-won teddy bear prize? The kindness of the well-meaning Shriner clowns manning the photo booth who seem to have missed the memo that no one – really, no one – likes clowns?

Is it the hardened father in the denim vest asking the vendor how much the small Spider-Man inflatable is, as his tow-headed son looks up at the impossibly awesome parade of contorted plastic Spideys, backlit and aglow against the dark sky? Is it the matter-of-fact tone from the seller as he delivers the shameless quote of $8? Is it the dad’s reach for his trucker’s wallet, as he opens it and peels off a ten in exchange for the toy that’s worth, maybe, a quarter?

Or is it the unadulterated joy of the boy who can’t believe he has just received the best gift? Ever?

The answer is yes. Yes it is.

Editor’s Note: This is the third installment in a continuing series as author and photographer M.J. Alexander chronicles her travels across the state of Oklahoma.