Pictures From The Missing Lake - 405 Magazine 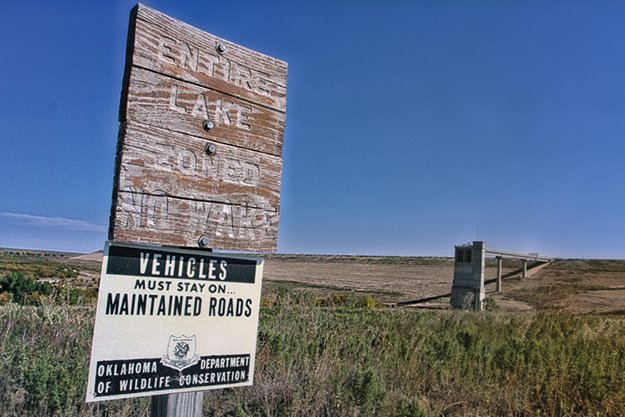 The Name Was Born of The Buoyant Confidence of Squatters Who Scratched Out a Place in The High Plains of No Man’s Land. A cluster of homes was built in 1886, before land ownership was allowed in the area, west of the Cherokee Outlet.

Yet its founders hoped for the best. They called their town Optima, from the Latin for best possible result. The town inspired the name of nearby Optima Lake. On a map of the Oklahoma Panhandle, the lake beckons – a crescent-shaped splash of blue in eastern Texas County.

In reality, the lake barely exists at all.

Conceived as an FDR-era New Deal project, the lake and dam were authorized by U.S. Congress as part of the Flood Control Act of 1936, part of a master plan to control the cycles of drought and dust in the American West. The design called for four projects on the North Canadian River: reservoirs at Optima, Fort Supply and Canton, and the construction of the Oklahoma City Floodway. Three were built. The Optima project stalled.

It would take 30 years of planning and lobbying to win enough allies to fund the project. Supporters waxed on with Panglossian pluck, insisting that a dam and reservoir would transform the semi-arid rangeland into an oasis on the Plains, a jewel in the crown of Oklahoma’s collection of more than 200 man-made lakes.

Though original designs had outlined an earthen dam 65 feet tall and 4,200 feet long, it was decided that would not be large enough. Revised plans called for a dam 85 feet high and 10,800 feet long, expanded not only to include farm irrigation, flood control and a drinking-water supply, but to create a center for recreation and a source for hydroelectricity. A brochure from the Guymon Chamber of Commerce promoting the project told of the reservoir that would be created: up to 100 feet deep, backing up 10 miles on the Beaver River and nine miles on Coldwater Creek. There would be water skiing. Fishing. Speed-boat racing. And tourists, lots of tourists.

So in 1966, 30 years after its first approval, construction began. By the time the project was completed 12 years later, the dam would stand 120 feet high and nearly three miles long. Total cost: $46.1 million.

Yet despite its massive size, despite the civic will of regional businesses, despite the political muscle of U.S. Senator Robert S. Kerr and U.S. Speaker of the House Carl Albert, despite the very optimism that conjured the dam into being, the mammoth project failed.

The reason is simple. The water supply dried up, and the reservoir never filled.

The source of the lake was to be the Beaver River, known downstream as the North Canadian. As the 20th century progressed, the river slowed to a trickle as levels dropped in the Ogallala Aquifer, the water table beneath Oklahoma and parts of seven other Western states. In 50 years, demand for water increased 25-fold, mostly due to expanded irrigation. Since the 1950s, the Ogallala has lost an estimated 11 percent of its volume. There would not be enough to create an oasis after all.

During the first full year of operation, in 1979, the Corps declared, “the optimum visitation for the project is 600,000 annual visitors and will be reached in 2014.”

But just as the flow of water was miscalculated, so was the stream of visitors. Somewhere between 2,000 and 5,000 people a year now make the trek.

As the dream of Optima crumbled and budget cuts kicked in, the U.S. Army Corps of Engineers ended onsite operations in 1995. All services have since been cut off. The Corps of Engineers conceded in a 2010 report: “The authorized purposes that Optima Lake was built for have never been fully realized.”

Today, the grounds feel post-apocalyptic, dotted with remnants of a lost civilization. Bullet-riddled signs announce the Optima Dam and surrounding National Wildlife Refuge. The outbuildings have been torn down for safety’s sake, leaving little more than long dirt roads and disintegrating asphalt. Concrete picnic tables squat heavily on large slabs installed atop the parched biscuit-colored plain. Some tables get intermittent shade from contorted trees, gnarled and twisted by the wind. Desert grasses cleave long cracks through acres of parking lot pavement, checker-boarding through hundreds of empty spots for the tourists who never came.

A massive boat launch with ribbed ramp leads down what would have been the bottom of the lake. At the end of the ramp, a long dirt road snakes away, tall grasses bristling between the two tracks. Towering above the plain, the desolate dam bakes in the sun.

As the federal government and local groups discuss what should happen next, yucca and hardy wildflowers spread out among the buffalo grass. Prairie dogs scurry among the fields. Quail and pheasant, deer and turkey thrive beneath skies that are a flyway for migratory birds.

As they ponder, the land is returning to its natural state.

And that may, in the end, be the best possible result.

Editor’s Note: This is the 20th installment in a continuing series as author and photographer M.J. Alexander chronicles her travels across the state of Oklahoma.