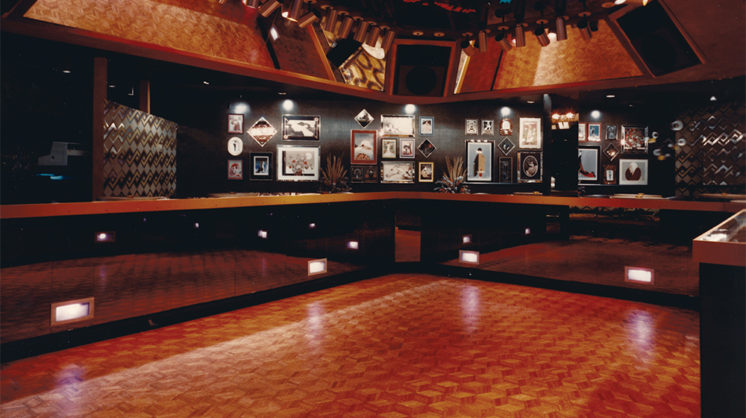 Donna Summer was looking for some hot stuff, the Bee Gees were stayin’ alive and Alicia Bridges loved the night life on the disco ’round. Those and so many other disco-era hits reverberated off the walls of Oklahoma City’s beloved Pistachio’s nightclub – the place to be and to be seen in those heady disco days of the mid-to-late 1970s.

“Pistachio’s opened in 1975,” says Dave Riesenberg, who worked at Pistachio’s during its heyday. “It was one of the first discos in Oklahoma, and at one time there was one in Tulsa, as well as one in Houston.”

Pistachio’s was located on the southwest side of the lower level of 50 Penn Place. In those days, the complex was still relatively new, and the tony shops below the office tower attracted shoppers from nearby Nichols Hills. But at night, after the stores had closed, Pistachio’s livened things up.

“We had been open a couple of years when, in 1977, John Travolta’s film Saturday Night Fever hit the theaters,” Riesenberg says. “After that, disco just exploded. Pistachio’s was new and fresh, and it was packed to capacity every night. We played all the latest music, and the dance floor was always crowded.”

The folks who frequented Pistachio’s were the who’s who of Oklahoma City, Riesenberg said. “Our clientele adhered to a strict dress code,” he adds. “And those were the days of ‘liquor by the wink.’ We were a private club, and a Pistachio’s membership – to those who had to buy one – was $100. During the disco years, we did not serve beer. The number one drink was Chivas and water or Johnnie Walker Black.”

A private room offered backgammon, and quite often those who were not on the dance floor were gambling, Riesenberg said. But it was irresistible tunes from KC and the Sunshine Band, ABBA and the Village People that kept people grooving on the dance floor. And what a dance floor it was; by 1970s standards it was state-of-the-art, with strobe lights, neon and mirrors.

As the hedonistic decade came to an end, disco took its final breath. But just as John Travolta had given life to the disco craze, his new 1980 flick spurred a new movement.

“The Travolta film Urban Cowboy did for country music what Saturday Night Fever had done for disco,” Riesenberg says. “We remodeled the place, and Pistachio’s went country. The dance floor needed to be a lot larger for line dancing and the Cotton Eyed Joe. And the scotch we served during the disco days was replaced by Crown Royal – and of course, by then, we had added beer to the list.”

Suddenly Donna Summer gave way to Johnny Lee, and KC and the Sunshine Band was replaced with David Frizzell and Shelly West crooning “You’re the Reason God Made Oklahoma.” The Urban Cowboy days had arrived.

Pistachio’s Country rode the rising tide of new country through the mid-’80s before finally shuttering for good.

“We had a good run,” Riesenberg says. “During the oil boom of the ’70s and early ’80s was a very decadent time. But it was a great time to be a bartender!”