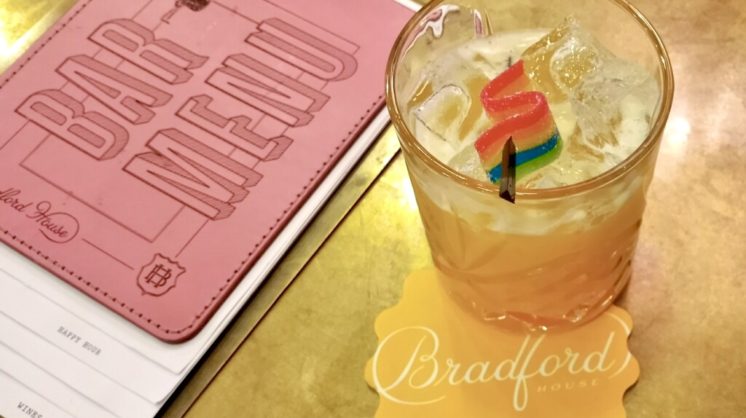 Tramp’s is about to turn 50. The metro’s iconic gay bar known for 32 years of drag shows and for an unofficial motto — Every drink is a double even if you didn’t ask for it — opened in July 1972 as a haven for the LGBTQ+ community. With the closure of Hi-Lo, Tramp’s officially becomes the oldest gay bar in Oklahoma City, and possibly the longest continuously operating one in the state.

Tramp’s doesn’t have a printed cocktail menu, but it does offer features for Pride Month. “People don’t come here for classy,” bar manager Evan Bottoms said. “Sixty percent of our business is a guest saying ‘Just pick something for me,’ or me asking, ‘Sweet, sour or in between?’”

Bottoms made the Pearl Diver, a mix of Malibu, dairy-free cream, grenadine and pineapple juice, for their Pride feature. (There was another option, and while funny and likely delicious, it’s not really named to be featured in publication.) Like all the other drinks at Tramp’s, the Pride cocktails are boozy, in keeping with its other unofficial motto: The Home of the Big Girl Drink. Honestly, Bottoms could work in comedy, as he rattles off more unofficial mottos — maybe official? — than would fit neatly into one story.

After 49 years, Tramp’s is still redefining its identity, even as it holds true to being the kind of divey bar where you can find nine varieties of Long Island Tea — “Every color of the rainbow,” as Bottoms put it.

“We’re a speed bar on purpose,” Bottoms said. “We don’t want to get into craft. We finally became nonsmoking and started taking cards instead of just cash after 49 years. But we’re still open 365 days a year.”

“On every one of the ‘family’ holidays, the owners provide catered food for guests,” Bottoms said.

It’s a custom that started when the owners responded to what in many ways in 1972 was a community in exile.

“Coming out meant being cut off by family, so there was no Christmas or Thanksgiving dinner for Tramp’s regulars,” Bottoms said. “They still offer those meals, and we still have guests who don’t have a family they can go home to or a home where they’re not welcome.”

It’s the spirit of Pride Month 365 days a year.

In addition to the Pearl Diver at Tramp’s, you can find Pride cocktails featured in other popular bars around the metro.

Bradford House. Bartender Ashley Rawls created the Willow Pill as a riff on a Mai Tai with Amaro Nonino to tone down the sweetness and add a touch of bitterness on the finish. All proceeds from the Willow Pill go to Free Mom Hugs.

Chicken Foot. Provisions Concepts chose one of their Chisholm Creek concepts as the headquarters for their Pride cocktail. The Haymaker is pear vodka, pineapple juice, sweet and sour and ginger beer.