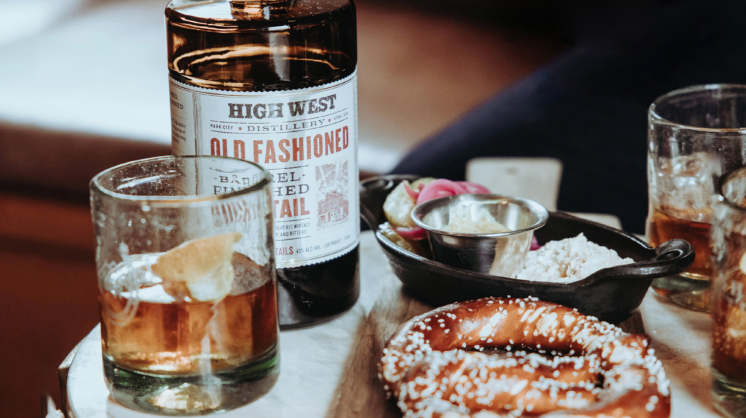 Premixed beverages around the 405.

While it’s often lumped into the seltzer category, popular beverage High Noon is actually a vodka soda, and lives in a category the industry refers to as RTD (ready to drink). RTDs have shown substantial growth over the past three years, with an increase of 45% from 2020- 21 and 170% from 2019-21. Calling it explosive may be insufficient to describe a rate of growth rarely seen in the spirits business.

The pandemic definitely helped sales, with people avoiding bars and restaurants to drink at home, and when staying in is combined with a lack of training or equipment, RTDs — depending on the brand — can be an excellent substitute. In many cases, they are simply a one-and-one like High Noon: one spirit and one mixer, thus the name. More complex cocktails have popped up in cans over the past few years, though, and several of them are well crafted and delicious. Below we look at some of the better brands available in the 405.

Scratch Kitchen and Cocktails in Norman owner Brady Sexton released his own Scratch Old Fashioned in a 750ml bottle in 2020, and recently he changed the whiskey in the bottle to Guthrie-based Wanderfolk Spirits’ Same Old Moses bourbon. The premade cocktail uses three Bitter Cube bitters, demerara, organe and grapefruit. Each bottle contains roughly ten 2.5-ounce Old Fashioneds, and can be found all around the metro, including Spirit Shop in Norman, George’s and Freeman’s Liquor Mart in OKC and Edmond Wine Shop.

High West’s Barrel-Finished Old Fashioned relies on rye and bourbon to create a more complex cocktail. The finished product is rested in used rye barrels, which allows the flavors to meld, leading to a richer, rounder taste.

Relatively new to the Oklahoma market, London-based Greenall’s Gin has a line of four gin and sodas that might be the best booze in a can you’ve had. On the sweet side, their combinations of solid dry gin, natural fruit flavors, soda and sugar are mainstream crowd-pleasers.

Straightaway produces one of the most interesting (and delicious) lines of RTDs, including the remarkable Lintik, a gin-based cocktail with lemon, which originated — as the story goes — at a hotel in Manila. It’s rare to find a bar that serves one, so this is about the best option if you want to try this zippy, refreshing cocktail.

Pittsburgh-based Maggie’s Farm is no stranger to awards – it makes some of the best rum in the world – but its Rum Old Fashioned is easily the best RTD on the market and deserves its own award category. If a bartender served it to you, you’d swear it was made from scratch. Seriously, that good.

In that same vein, Greenhook Ginsmiths is using its remarkable, made-in-the-U.S. gin to craft a canned gin and tonic that is right up there with Maggie’s Farm in terms of quality. Cocktails that rely on citrus don’t always do well as RTDs; no one wants at citrus notes. This G&T, though, relies on lime oil from the peel to amp up the citrus and round out the proper amount of bitterness.

People like mezcal (or say they do), and Madre Mezcal, a company known for creative packaging and a high-quality product, has released a line of four Mezcal RTDs under the Desert Water label. The four are Prickly Pear and Lemon; Mushroom, Sage and Honey; Grapefruit and Yerba Santa; and Original, which is Mezcal, sparkling water and citrus. These are not crushable beverages for a pool party — they’re serious, complex cocktails, but they’d be great on the patio.