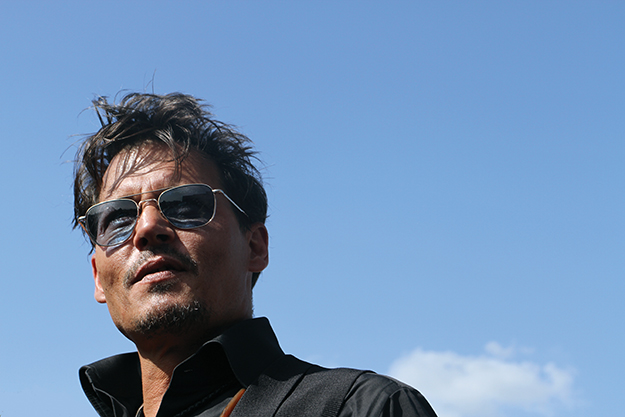 I Am Alone In A Hotel Room With Johnny Depp, And He Is Calling Me Darlin’.

There is no hint of the real news: Johnny Depp is in the building.

He had arrived in Oklahoma to preview “The Lone Ranger” to the Comanche Nation, two weeks before its national unveiling. His five-hour appearance was so secretive that incredulous friends of many of those invited did not find out he was in Lawton until pictures of him walking the red carpet between banks of bleachers outside the Carmike Cinemas started showing up on Facebook and Twitter feeds.

Before the premiere, he is booked for one sit-down interview at the Best Western. It is with Mandalit del Barco, Los Angeles-based correspondent for National Public Radio. I am to be the photographer.

As he enters the room, I wait against the far window. He circles his way around, eventually making it to me: “I’m the NPR photographer. A radio photographer – hard to believe, I know. Yet here I am.”

He laughs and clasps both hands around mine. He is both tousled and tailored, dressed all in black, with tinted shades and gleaming Elvis hair. He smells ever-so-faintly of French cologne.

As we chat, a liaison for the Comanche Nation approaches, tentatively extending her cell phone. Could I take a picture of them together? Johnny Depp smiles and she scoots next to him, star struck. I coax them to the corner, between the radiator and the end table, and snap them against the wall. She is about to peel away, but I keep clicking. “Always gotta take two … OK, now look at each other.” They do, and I take another, then pull off a fast fourth. “There you go. That’ll be your screensaver.”

Johnny Depp comes up to whisper conspiratorially amid the din of the room. “That was so nice. Thank you for doing that.”

He takes my hand again and starts to talk. He seems more musician than actor, maybe a good-hearted guitarist who cleans up nice. You just know you’d be friends with him, if he only lived a little closer. The kind of guy who is underwhelmed that a publication like, say, People magazine twice crowned him Sexiest Man Alive and breathlessly called him Hollywood’s most irresistible iconoclast, a three-time Oscar nominee “as one-of-a-kind as his beloved 15-year-old boots and as smoldering as his favorite Cuban cigars.”

The room was deemed too crowded and noisy, so everyone retreated into the hall. Out went the director, Gore Verbinski. The producer, Jerry Bruckheimer. And then Johnny Depp with Wallace Coffey, chairman of the Comanche Nation.

They file back in pairs for their interviews. The room is kept completely quiet for the broadcast, so my camera is set aside. I sit on the floor at Johnny Depp’s feet, studying him as he talks from the couch.

He thinks carefully about his words, which have become measured and vaguely British. He is earnest about his portrayal of Tonto; humbled by his adoption into the Comanche Nation, an honor beyond all honors; deferential in his conversation with Wallace Coffey; touched by the gift from the tribe of a new beaded bolo with his character’s bird-bedecked silhouette from the movie.

I search his face, his eyes, his gestures for remnants of his cinematic self. There is not a glimmer of Edward Scissorhands, no hint of the kabuki-faced Mad Hatter, no crazed Sweeney Todd, no kohl-eyed Captain Jack. Maybe, in fact, he is more actor than musician after all.

As the interview proceeds, the handlers become anxious. Everything is way behind schedule. The air conditioner and fan have been turned off to establish radio quiet, and the room is getting warm.
No one dares interrupt, for fear of marring a key phrase.

As the questions wind down, I take some quick shots. The entourage begins to file out of the room. Wallace Coffey rejoins his wife, and Johnny Depp hangs behind for a couple of photos by himself.

We are done, and I sling the camera over my shoulder. He again reaches for my hand, clasping it tight. That would be three times in all, in case anyone was counting.

With everyone else gone, we chat and move toward the door. He pauses at the long mirror on the wall near the dresser, admiring his new beaded bolo.

It occurs to me that I am alone in a hotel room with Johnny Depp, and that he is calling me darlin’. The fact that he calls most everybody darlin’ does not matter. He speaks now not in the measured mid-Atlantic accent of the interview, but in a sort of honeyed, tobacco-tinged, Kentucky-smoked drawl.

His right hand – the one with four silver pirate rings and the crow tattoo peeking out beneath the cuff of his silk tux jacket – works to straighten his bolo.

As he aligns his regalia, I tell him I hope he will be able to enjoy himself, maybe even have a little fun – or a lot.

“I think I will!” He looks over his shoulder with an impish, unguarded smile that turns gleeful and then joyous, a quicksilver flash of unadulterated happiness. He pauses for just a second, and beckons me to follow.

We step into the second-floor hallway outside Room 210. He is engulfed by yellow lanyard-bedecked Disney handlers, police security and tribal officials ready to whisk him down Cache Road to the red carpet where he will brave Lawton’s shadeless heat and humidity in the 90s to greet the waiting crowd, shaking every outstretched hand within reach, autographing every picture thrust his way, signing several forearms, a pair of shoes and a long-haired girl’s hand-lettered poster with his Comanche name: Mah-Woo-Meh, the shapeshifter.

On the way out, the motorcade passes the Best Western sign as it keeps its vigil, flashing announcements to traffic off Exit 37. But for now, ladies and gentlemen, Johnny Depp has left the building.

Editor’s Note: This is the 13th installment in a continuing series as author and photographer M.J. Alexander chronicles her travels across the state of Oklahoma.