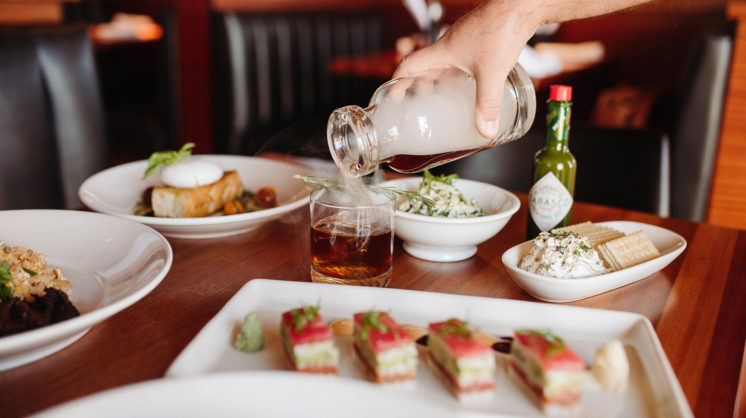 Mention the name Jim Blanchard to anyone who worked for and with him, and the response is always a variation of “the best man in the Hal Smith family of restaurants.” Blanchard, an area partner for Charleston’s and the man who helped get Mahogany Prime Steakhouse started, died in a motorcycle accident in 2018. Jimmy B’s Culinary + Krafted, the new Automobile Alley restaurant from HSRG at 1225 N Broadway, is named for him.

Kyle Lippe, the director of operations at the Skirvin Hilton, spent many years behind the bar at Mahogany on W Memorial Road, and like so many other HSRG alumni, he remembers Blanchard’s tough exterior and the no-nonsense way of doing business. 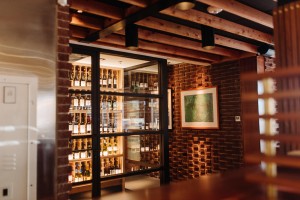 “Nicest guy in the world, though,” Lippe says. “He was a ‘two fingers of Patron’ drinker when he was in a good mood. He always asked why the bartenders didn’t follow the steps of service per the policies. My answer was always, ‘That’s what happens in the dining room.’ He’d smile and say, ‘Well, you’re busy, so I guess I’ll let it slide.’”

Blanchard didn’t really let things slide; in fact, had Lippe and his bartender sidekick Jared Keith not been two of the best in the city, he likely would have been more adamant on the steps of service. He liked his people, though, and it showed. Former server Amber Simon talked about his habit of remembering names and details about employees’ lives. “He was a genuinely kind person, and that’s rare in hospitality,” she says.

When you set out to create an homage to a beloved figure, the most important thing beyond getting the name right is making sure the effort is worthy of the person who inspires it. There is every reason to believe Jim Blanchard would have loved Jimmy B’s, and not just because he would have loved the bar – he was a spirits guy, after all – but because everything about the place is built on excellence: food, service, cocktails and atmosphere.

“Hal Smith has long been a wine-focused company,” Mike Kraft says. Kraft is the son of HSRG partner Hank Kraft, and the creative force behind Neighborhood Jam and Jimmy B’s. “We have a good wine list at Jimmy B’s, too, but I love craft cocktails, so when we first started talking about the bar, I wanted it to be spirits-driven.”

Kraft enlisted the assistance of former high school classmate, and Texas hospitality industry veteran, Sterling Black to build the cocktail list and the spirits library. “We started workshopping cocktails in August 2020, and eventually developed 42 drinks, of which 10 are on the current list.”

The cocktail menu will be seasonal, so changes will occur at least quarterly, but because of Jimmy B’s unique position in the company, other changes are certainly possible. The restaurant and bar are outstanding one-off concepts in their own right, but they are also functioning as a test kitchen and test bar for Hank Kraft’s side of the company: Mahogany, Red Rock, Charleston’s, Neighborhood Jam and Upper Crust. That means cocktails and dishes that appear on the menu at Jimmy B’s may make their way to other menus, depending on customer feedback in the form of sales.

“The Jimmy’s Old Fashioned and Jimmy’s Sazerac will be fixtures – Jim was from Louisiana, so the Sazerac is dedicated to him – but we’ll change some of the ingredients based on season, and the barrel select whiskeys we use will change, too,” Mike Kraft says.

The food menu is eclectic on purpose, and not just a little eclectic: steak, sushi, Korean-influenced tenderloin and noodles, chicken salad, ponzu, French dip – it’s all over the place. Kraft noted it’s also the smallest menu in the company, but the diversity is like no other concept. This is the puzzle and genius of Jimmy B’s. How do those dishes end up on the same menu? Does it work? There was skepticism in the hospitality world ahead of its opening, but the menu works, and it works for the same reason Jimmy B’s overall works: it’s forward thinking without losing the grammar of what Hal Smith is.

HSRG has always been built on service and consistency – and yes, good food – but all companies arrive at a point of transition. How do we go forward and appeal to people younger than our current demographic? The answer for Kraft was to create a modern American restaurant at the bar and a traditional Hal Smith concept in main dining. No, he didn’t put it that way.

“I guess I don’t disagree with that assessment,” is how he puts it. A friend who dined there says it best: “I could sit with my parents in one of those booths, and they’d feel like they were in a Hal Smith restaurant, and I could sit at the bar with my girlfriends, and it would feel very much like a cool, modern American bar.”

The good news is that the menu is available in both places, and there is something for everyone, on purpose. The sushi is shockingly good; the company hired Chef Richard Lee to oversee the Asian dishes. Chef Brad Johnson took care of the rest of the menu, and everything from the best coleslaw in OKC to the French dip to the Thai noodle salad to the Delmonico steak frites is executed beautifully.